The Volkswagen ID.R is not only quicker than petrol-powered race cars but consumes far lesser energy.

The Volkswagen ID.R has been busy racking up world records for over a year now. Its first competitive debut in Pikes Peak in 2018 beat the outright course record up the mountain in 7:57. Then, in 2019 it set the fastest electric car time of a scorching 6:05 around the Nurburgring Nordschliefe.

Volkswagen made a comeback to the Goodwood Festival of Speed. Roman Dumas drove the 670 Hp ID.R across the line clocking 39.9 seconds up the hill. Thus beating Nick Heidfeld’s record by 1.7 seconds in a McLaren Formula 1 race car.

Being much faster, does the ID.R consumes more energy than petrol-powered race cars? Volkswagen has released facts and figures of the ID.R’s record run around the Nordschleife, and they were pretty fascinating. Although it doesn’t carry a fuel tank, electric vehicles do consume energy to get around. And like petrol-powered vehicles, to go faster, the higher the energy requirement. 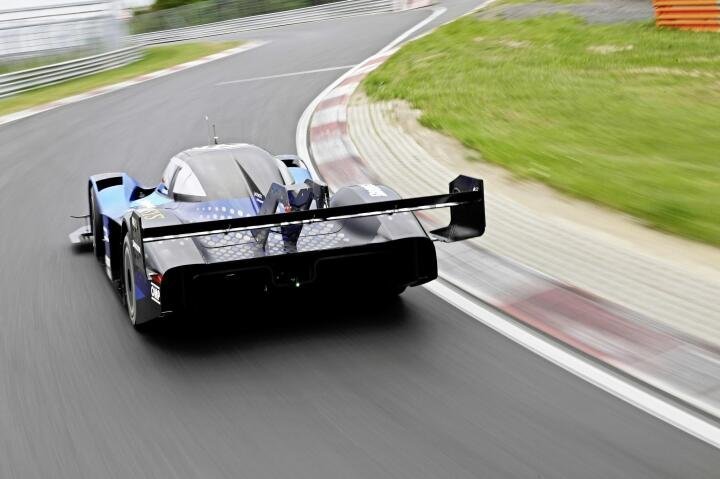 Clocking at 6:05.336 minutes and at an average speed of 204.96 km/h, the all-electric race car is not only faster than a GT3 race car but requires only a fraction of the energy. Volkswagen said that the ID.R consumed just 24.7 kWh of battery power during its lap around the ‘Ring which is about 55% of its 45 kWh maximum battery capacity. The German automaker pointed out the energy used is equivalent to 25% of the energy a GT3-class race car requires to complete a lap of the 20.8 Km loop.

The other advantage electric vehicles have, or in this case the ID.R, is that they are able to recuperate energy through braking. The ID.R generated 9.2% in the record lap, and the maximum value achieved just before entering “Döttinger Höhe”. By the start of the straight. The ID.R regenerated exactly 9.87% of the energy consumed to that point.

The two-metre plus rear wing has a DRS element which is able to reduce drag on demand. By the push of a button, Drag Reduction System (DRS) reduces drag in 23 spots of the circuit, when accelerating or in the straights. This enables the two electric motors were able to efficiently use the energy stored in the batteries.

And, with such speeds, the driver experiences high-levels of force. Roman Dumas was subjected to centrifugal forces equating three and a half times his own body weight, with the measuring instruments onboard ID.R recorded up to 3.49 g. 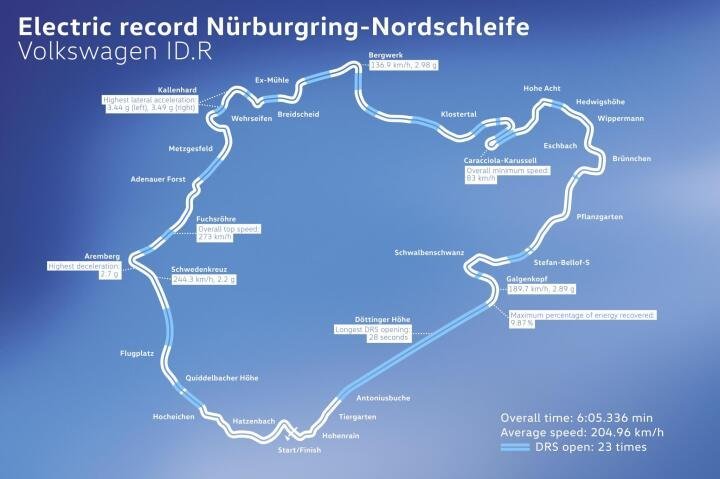 Specifically for the record run, the ID.R’s power comes from glycerin, the same stuff you’ll find in cosmetic products. Volkswagen chose this as a source of fuel for the electric generators based on the fact that it burns without any harmful emissions or residues.

How relevant the ID.R is to the future of mobility?

The ID.R is the forerunner and prototype for the ID range of battery electric vehicles (BEV) from 2020. The technologies used in the ID.R will likely to be seen in future production models.

Volkswagen Passenger Cars Malaysia launches Das WeltAuto certified used cars at the Volkswagen Fest 2019 Buying a used car can be tricky – and if you’re not careful – it can be risky. There’s a […]

Volkswagen Passat Elegance has redesigned front and rear, new gearbox, reworked engine and additional features  The eighth-generation Volkswagen Passat has been given a mid-life refresh. There is now just one trim level offered, the Elegance. […]