Can equipment upgrades ahead of the facelift keep the Golf at the top of its game?

The seventh-generation Golf garnered superlatives and more than a clutch of awards when it was launched in 2013. It even won this magazine’s Car Of The Year award twice, in 2013, and again in 2014, as the defending champion, overshadowing off a newer, fresher batch of contenders for the crown. It ticked all the right boxes where it counted: design, build-quality, engineering refinement and driving performance.

Some changes  were made to the Golf TSI line-up recently, revising the features and differentiating it into two trim levels, Comfortline and Highline, ahead of the facelift that is due soon. Most of the new kit is in the Highline, the version to which we were handed the metaphorical keys, a remote control now that there’s keyless entry and push button ignition.

The changes outside are new R-style LED combination rear lamps and 17” rims, while inside, new sports seats. There’s also a bump in output to 148bhp which improves acceleration with a marginal gain in top speed; and the addition of Park Assist, and Rest Assist to assess and warn of driver fatigue based on data gathered from the driver’s braking patterns. 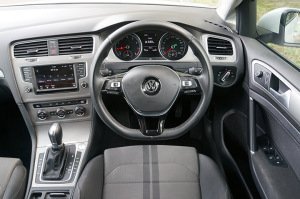 There wasn’t time to get bored while driving the Golf to experience Rest Assist. Not when there was Park Assist to keep this reviewer entertained. Parallel parking can be a chore, especially when there are impatient drivers honking while you eyeball a lot for size. There’s also the hazard of another driver nipping in from behind to poach it. Park Assist can assess the size, back into the lot and straighten out the car in less than a minute, with a few taps on the pedals to control the pace. It’s even faster if you’re not videoing it, moving extra slowly to make sure all the angles are covered in the video.

The new Madrid rims are a much needed style update for the Golf which in TSI-guise lacked the visual flair of the more racy-looking GTI or the artfully under-stated rocket, the R. But the TSI is a hare in carapace with acceleration that would knock the socks off its competitors leaving them trailing in its wake. In sport mode, the gap widens even more.

The TSI is hauled by less horses than the Peugeot 308 THP and Ford Focus but the revs at which they peak, the stiffer springs, better controlled weight-shifts and the handling advantages from larger wheels, responsive steering and electronic limited slip differential to stave off understeer on corners gets the Golf ahead on the open road. The only thing missing was paddle shifts. Perhaps in the facelift along with a rear view camera?

The new extras and price reduction are much needed to make the Golf more competitive against the Focus Sport+, almost RM21,000 less and the 308 which is RM32,000 less, both of which come with more kit. The Golf is brought in from Germany , The 308 is assembled in Malaysia and the Focus in Thailand, for which they gain tariff advantages. Then there are the Japanese makes… pitted against which, the Golf has little chance where price for size is still a major consideration

Even more, newer cars have come on to the market since it debuted four years ago. If driver enjoyment were the most prized attribute in this segment, this would still be the winner.

Volkswagen Golf 1.4 TSI
Four years on and before the mid-season refresh, the upgraded Golf 1.4 TSI is still at the top but its price puts it out of reach for most

Latest version of Mini’s digital infotainment services interface will be available in all 2019 year make Mini models. The newest generation of Mini Connected with built-in 4G SIM technology is now in the 2019 Mini. […]

Things to do before crossing into Singapore or Malaysia

Every day, thousands of vehicles cross the Causeway and Second Link between Singapore and Malaysia. All Singapore-registered cars have been required to have an In-Car Unit (IU) fitted since electronic road pricing was introduced in […]