How to describe the new Evoque? Like the old Evoque but dialled up by 10% – and that’s exactly how Land Rover wants it. Since launching seven years ago, the Evoque has done for Land Rover what the Cayenne did for Porsche. And the buyers just keep on coming.

When you have such a successful formula, wisdom suggests not to mess with it. This second-generation design is only a subtle evolution, yet looks can be deceiving because the car is fresh from the ground up. The body structure is 99.9% new, with only door hinges remaining from the former car. It sits on a new platform, the Premium Transverse Architecture, which allows for mild-hybrid and plug-in hybrid variants and gives more interior space.

Space was a bugbear on the last Evoque. This new model has almost the same footprint as before – as dictated by buyers’ wishes – yet the wheelbase is 21mm longer. Land Rover admits that it lost prospective buyers first time round due to poor rear space, so you’d imagine this was top of the ‘to improve’ list here.

When the Evoque launched, the compact SUV segment barely existed. Now, with a shed-load of rivals, the Evoque must be on a par not only for space but everything else too.

Diesel is certainly not dead when it comes to the Evoque: 75% of sales are expected to be oil-burners. There are six four-pot engine options, split equally between diesel and petrol. Bar the entry-level D150 diesel, all get torque-vectoring four-wheel drive and 48V mild-hybrid assistance.

The mid-range D180, driven here and likely to be the biggest seller, has enough grunt to satisfy on all but the steeper hills, although the nine-speed automatic gearbox can act overzealously when driving with anything but absolute smoothness.

Still, the hushed tones of this engine should be applauded, as should the car’s broader refinement. It defiantly absorbs undulations and cossets the driver without the loss of decent dynamics, moving with relaxed purpose and respectable body control. It’s not the most agile in its class – a hefty 1891kg kerb weight sees to that – but thanks to a quicker steering ratio, turning into corners still holds some joy. Thankfully, that’s not at the expense of straight-ahead driving where stability reigns.

Inside are better quality materials and notably more rear leg room, albeit not class-leading. The dash and dual-screen infotainment system are, in this writer’s opinion, the best looking in the class, evoking the kind of luxury that Land Rover hoped for, not least to justify the costly sum
of this model.

If over-the-air updates, ample USB ports and Apple CarPlay/Android integration no longer impress in this digital age (and the Evoque ticks all these boxes), there are two nifty technologies that might. The first uses a roof-mounted camera to display a widescreen look at what’s behind on the rear-view mirror, eradicating visibility or full-boot issues. The other is a so-called ‘see-through bonnet’ in which a number of cameras build an image of what’s underneath the car. It’s perfect for off-roading but more prudently, it’s just as effective when parking in tight spots near high kerbs. 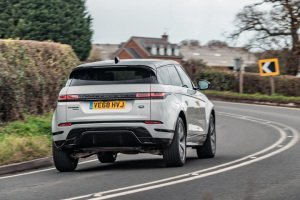 Just a quick mention, then, for the Evoque’s off-roading capabilities. Despite few owners veering off-road, Land Rover’s 4×4 roots mean it won’t create a car which isn’t adept. This is no soft-roader, with a respectable 212mm of ground clearance and numerous all-terrain systems upping the Evoque’s off-road abilities over those of its predecessor.

Overall, the Evoque’s improved comfort, practicality and innovative technology means a dramatic step up for the baby Range Rover, bringing it onto a level playing field with rivals such as the Volvo XC40 and Audi Q3.

Good lease rates will be crucial given that this is a pricier proposition than those competitors, but the Evoque has nonetheless reached maturity at a crucial time.

The plug-in hybrid variant, powered by a 1.5-litre 197bhp petrol and 107bhp electric motor, will arrive in the next 12 months and is predicted to make up a third of UK sales. RB

Range Rover Evoque D180 SE R-Dynamic
A coming of age for refinement, luxury and innovation. More of a Range Rover than ever

Kia’s newest Sorento SUV is now bigger and features an upmarket cabin, as well as uprated chassis and suspension for improved handling and refinement.  The 2020 Kia Sorento has made its debut featuring an all-new […]

The CX-30, an all-new compact crossover is larger than the Mazda CX-3 and slots in between the CX-3 and the CX-5 The Mazda CX-30 SUV has been launched in Malaysia by Bermaz, the official distributor […]