Porsche has outlined how it has future-proofed the new eighth-generation 911 by enabling it to support both mild-hybrid and plug-in hybrid drivetrains.

Following the launch of the car at the Los Angeles motor show, Porsche has revealed more technical details about the 992-series model.

The 992-series 911 will be offered initially with a familiar range of turbocharged flat six petrol engines, with a 3.0-litre capacity in the first-to-launch Carrera S and 4S. But Porsche’s sports car development boss, August Achleitner, said work on a hybrid version – which can run purely on electric power for short distances – is progressing.

“We’ve taken the experience we gained with hybrid versions of the Cayenne and Panamera as well as the 918 Spyder and applied it to the new 911,” said Achleitner.

Porsche has modified the 911’s drivetrain to allow the housing of a disc-shaped electric motor within the new eight-speed PDK gearbox. The new gearset is 100mm shorter than the old seven-speed system, providing space for the electric motor, and it can handle more torque.

The 911’s four-wheel-drive system, as used on the Carrera 4S, has also been reworked and allows up to 50% of drive to be sent to the front wheels. A new fully electric brake booster allows more significant recuperation of energy.

Achleitner pointed to the Panamera S E-Hybrid as a performance reference. That model uses an electric motor developing 134bhp and 217lb ft, which combines with a twin-turbo 4.0-litre V8 to offer a total of 671bhp and 462lb ft. Using that electric motor on the 911 Carrera S would potentially produce 578bhp and 506lb ft.

The battery used to power the electric motor in the hybrid 911 is likely to be housed within the front. The 992-generation 911 is the first vehicle to be built on a new version of the MMB platform, which has a fixed front section and adaptable rear section and can accommodate both mid- and rear-engined cars. It will also be used on the next generation of the 718 Boxster and Cayman.

Inspired by the previous-generation 911 GT2 RS, the new car features different tyre sizes, with 20in front and 21in rear tyres on the Carrera S. The rear tyres are also wider, which, Porsche says, helps improve balance, traction and tyre temperature. The steering is also 10% more direct on cars without rear-axle steering.

Saving weight was a key focus when developing the 911’s body, which features a revamped material mix. Aside from the front and rear aprons, the entire outer skin is made from aluminium, including the doors. That has allowed Porsche to reduce the use of steel from 63% in the previous model to 30%.

The new 911 has a number of adaptive aerodynamic elements. The rear spoiler has a 45%-larger aerodynamic area and opens above 56mph in a new drag-minimising Eco mode. When the car reaches 93mph – or 56mph in Sport or Wet modes – it switches to its maximum downforce position.

The rear spoiler also aids cooling, deploying above 37mph in high temperatures. There are continuously variable cooling air flaps in the front section, too.

Porsche says the new 911 Carrera S can lap the Nürburgring in 7min 25sec, five seconds faster than the previous model.

WE RIDE IN PORSCHE’S NEW 911
Whether the noise of the flat six engine from behind, or the slight burst of oversteer as my driver attempts to apply 444bhp through cold rear tyres, a ride around Hockenheim proves much is pleasingly traditional about the new 911 Carrera S.

Plenty has changed, of course. While an evolutionary approach has been taken, there are lots of ‘marginal gains’ that Porsche believes add up. And although there are new driver assistance systems, in the right conditions – say, with a racing driver behind the wheel on a circuit – the focus is firmly on performance.

In Sport Plus mode, the new dual-clutch gearbox holds gears for longer, offering more response, and the classic 911 balance is clear in corners, the more direct steering reflected in the driver’s confidence. 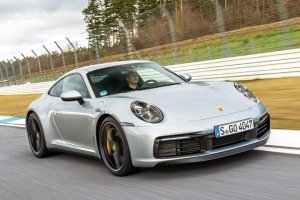 Our run ends with a blast round a wet handling track, first in standard mode and then with Wet mode engaged. The contrast between the sliding fun of standard mode and the impressive way the car’s systems maximise traction in Wet mode really showcases how Porsche has attempted to make the 911 both more driver-focused and more comfortable.

A few passenger laps on a track aren’t enough to really judge a new car, but they do suggest that the new 911 is at once a step forward and reassuringly familiar.