This lavish Lexus hybrid is heading to the UK for the first time to attack the German giants’ dominance in the executive saloon class. Should they be worried?

Selling cars in significant volumes and stealing market share from its chiefly German rivals has never seemed like a particularly high priority for Lexus in Europe, with the firm apparently content to play the longest of waiting games as its presence and profile have both ever-so-gradually risen. And yet there are now emerging signs that the company’s attitude to its own growth on the continent may be changing; that it’s rationalising its model range and ‘getting serious’ about maximising its European market potential.

Toyota’s premium brand has doubled its European sales over the last five years, mostly on the back of the NX crossover. Now it’s changing tack with its entrant in the mid-sized executive saloon market, with the aim of offering British and European buyers a more practical, better-value alternative to the likes of the BMW 5 Series and Audi A6. The change will come early next year, when the seventh-generation Lexus ES goes on sale in the UK. The model will supersede the GS in European showrooms.

The ES has been a fixture of Lexus’s global range of saloons for almost as long as Lexus has existed. It has long since become the firm’s most popular four-door, and has traditionally presented buyers in Lexus’s biggest markets with a more rational alternative to the GS ‘sports sedan’. The most significant thing the new one will represent from a UK perspective next year is a switch away from the dynamically appealing rear-wheel-drive mechanical template that the GS has offered to a more pragmatic front-drive layout.

You might wonder how could that be good news, either for Lexus or for potential customers? The answer may well prove to be about money. Being a relatively costly car to build, the GS could never really compete with its opponents from Mercedes-Benz, Audi and BMW at the cheaper end of Europe’s executive segment’s value scale. The ES, on the other hand, shares a platform, an undisclosed proportion of under-the-skin mechanicals and even an American factory with the current Toyota Camry (although right-hand-drive, UK-bound examples of the ES will be sourced from Japan, just as the GS always was). So you can appreciate why Lexus’s European product planners might be more attracted to the ES than the GS: because Lexus UK can probably benefit, albeit to a lesser extent than some might think, from some of the economies of scale that result from building one of the world’s bestselling passenger cars.

Let’s start in the obvious place: the Camry connection. It’s sure to become a stick with which some would seek to beat Lexus, as if to suggest that the ES is a less bona fide luxury product or credible rival for a Mercedes E-Class or Audi A6 than a GS was. As it turns out, I’m not sure either is true.

Chance afforded us the occasion to park our ES 300h test car next to a 2018-model-year Camry while taking a short break from our route in and around Nashville, Tennessee, and to observe that the likeness between the two is striking. Lexus engineers will also admit that the ‘GA-K’ platform on which the ES sits was developed with both the Camry and ES in mind, and that there is some commonality between the two cars as regards suspension and body-in-white.

But there are plenty of differences too. Lexus uses lighter materials and stronger joining techniques for the ES than appear in its Toyota relative, while the Lexus’s chassis is also laterally braced in places by structural ‘performance dampers’ (which will only appear on some trim levels). Compared with the Camry, the ES also uses much more thorough cabin isolation measures and unique suspension tuning. The former include a noise-suppressing alloy wheel design (see separate story, right), while the latter is delivered though double-valved shock absorbers. Opt for the ES in ‘F Sport’ and you’ll get adaptively damped suspension too. None of which sounds like the technical make-up of an executive saloon with very much to be sheepish about, does it?

Lexus has high standards to maintain on perceived cabin quality and luxury feel with its bigger saloons. For the most part, the ES measures up to them, although there were some places where our test car could have been made to look and feel more expensive. You’ll find soft, smooth leathers on the seats and used in places around its fascia, but its dashboard and doorcards more widely feature slush-moulded plastic masquerading as hide, and in a few places they feature harder, shinier plastics too. The decorative centre console trim doesn’t quite match that of the steering wheel for grain, and as a whole the car doesn’t have the imposing aura of richness, solidity and sophistication you’ll find in an Audi A6 or Mercedes-Benz E-Class.

Cabin space and practicality are good, with a couple of caveats. Stretches in both overall length and wheelbase compared with the respective figures of the previous-generation ES allow for good leg room in both rows, with larger adults comfortably being able to sit line astern – but second-row head room doesn’t quite hit the same standard. Meanwhile, Lexus’s decision to fit two kinds of structural braces around the car’s rear bulkhead sees off any possibility of folding rear seatbacks so, although the ES’s boot itself is both wide and long, you won’t be able to load longer items through into the cabin.

Lexus will only offer the ES to UK buyers in petrol-electric ‘self-charging’ hybrid form, as the ES 300h. Powered by a new 2.5-litre four-cylinder Atkinson cycle petrol engine that drives the front wheels through an equally new hybrid transaxle transmission (made up of a 118bhp electric drive motor, a smaller motor/generator and an ‘e-CVT’ gearbox), the ES hybrid produces 215bhp, emits 106g/km of CO2, and comes with a combined fuel economy claim of just over 60mpg.

Those figures ought to look attractive when compared with both four-cylinder petrol and diesel versions of its key rivals, although a 0-62mph sprint claimed at just under 9.0sec will look less appealing in relative terms.

The ES has a more mature, refined and relaxing motive character than the GS. Its handling is composed, precise and fairly responsive, the car having medium-weighted steering of well-judged and consistent pace, and levels of outright grip and body control that will allow it to deal more easily with the full panoply of UK roads, I dare say, than some saloons of its size. The car is at its most gratifying, however, when driven at laid-back pace, when its absorptive, quiet ride soothes away bumps and edges very well indeed.

Lexus’s latest-generation four-cylinder hybrid powertrain is likewise at its best when you’re in no mind to hurry. Drive in Eco mode and you’ll find you can keep the combustion engine quiet for longer periods and have a fairly long, nicely progressive accelerator pedal calibration with which you can easily record fairly decent fuel economy.

Select Sport mode in order to adopt a faster stride, however, and you’ll find that, although the car’s outright performance level at full power is decent, the old Toyota/Lexus hybrid frustrations of too much hesitation and too little flexibility on part-throttle make the ES 300h feel less drivable and assured in its acceleration than you’d like. Though the car has wheel-mounted gearshift paddles, they’re of little practical use since the engine adopts Lexus’s familiar ‘elastic band’ style revving routine once you use more than about two-thirds power anyway, regardless of which ‘gear’ you’ve selected.

Which leads you to the conclusion that, front-wheel drive or otherwise, it isn’t actually the chassis of the Lexus ES that defines the limit of its driver appeal at all. Rather, it’s the car’s hybrid powertrain technology, which does the same thing for so many of the firm’s current model range, though admittedly more restrictively for some than for others.

Mind you, a shortage of driver appeal proves no great handicap for plenty of medium-sized executive saloons and, assuming it can be brought into the UK at a more tempting price than the GS had, the ES is good enough to do plenty to improve Lexus’s European sales. Though it’s no sensation, it’s probably a stronger alternative to a Volvo S90 or a Mercedes E-Class than a Lexus GS ever was to a BMW 5 Series or a Jaguar XF. 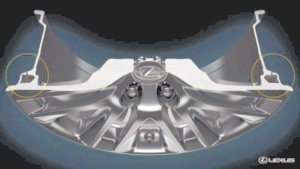 Lexus had a cutaway of its hollow-profile, noise-cancelling alloy wheel on display at the press launch of the ES.

The wheels, which use a design similar to the ones of the LS limousine, allow air pressure from within the tyre to pass into small chambers running around the circumference of each rim on the inboard and outboard edges via small holes. By doing that, some of the energy that would be conducted upwards through the suspension and into the cabin as tyre roar is instead broken up and turned into heat.

On the larger LS model, these innovative wheels are working in combination with run-flat tyres, but on the ES they’re fitted with conventional Bridgestone Turanza rubber – and they contribute to a very impressive standard of rolling refinement.

We tried the ES in both F-Sport and Ultra Luxury trim, and while the former didn’t adversely affect ride comfort too much, I preferred the latter. When it’s working well, saloons don’t get any more relaxing. MS

Ingolstadt’s compact executive balances performance and fuel efficiency  Perhaps the all-new A4 looks too much like its predecessor for the “look at my brand new car!” brigade but looking beyond that initial impression, there is […]