The K900 is Kia’s answer to the Mercedes-Benz S-Class, but for now its maker has no plans to sell its luxury saloon here. Mark Tisshaw finds out what we’re missing

A twin-turbocharged V6-powered Kia sports saloon developed by BMW M’s former chief engineer seemed like a fairly outrageous idea a few years ago, but the Stinger turned out to be so credible that you wouldn’t believe it was a first attempt from its maker.

In that context, a 5.1-metre-long, V8-powered, four-wheel-drive Kia luxury saloon to rival the Mercedes-Benz S-Class might not seem quite such absurd an idea as it once might have done. Perhaps more far-fetched, yes, but not completely a cause for spitting out your cornflakes.

And yet such a car is not an idea, but a reality – and one that has been a part of Kia’s range further afield for a few years now. The K900 (known as the K9 in Korea, but renamed for export for fairly obvious reasons) is indeed the manufacturer’s answer to the S-Class.

The car has now entered its second generation, having been launched in its home market this summer as a range-crowning technological tour de force. It has wider significance across the Hyundai Motor Group as the first car to use a new rear-wheel-drive platform that will also underpin Hyundai’s new Genesis premium brand and its G80 saloon, a car that will have greater export appeal than the Kia and is destined for mainland Europe and the UK.

The K900, meanwhile, will be sold in the Middle East and US but not Europe, because the idea of a Kia rival to the S-Class is unlikely to be one to find much credibility no matter how good it might be or how much post-Stinger glory there is to bask in.

We’re in Seoul to drive it but before we do, a chauffeur drives us. K900s are mostly experienced from the back seat by their buyers. What do they experience? Plenty of space, that’s for sure. A big comfy chair with lots of adjustability, and a decent enough ride. The feel is less luxury, more premium, perhaps like an Audi A8 from a decade ago: it ticks all the right boxes on paper but you don’t really feel all that special.

The chauffeur gets the really interesting job. From the driver’s seat you get to experience the V8. Powering the K900 is a 5.0-litre unit with 419bhp and 383lb ft, driving all four wheels through a very smooth-shifting eight-speed automatic transmission. It’s good for 0-62mph in 5.5sec. Yet this is no performance car. Instead, the V8 has been tuned the other way, to deliver effortless performance of the kind that quickly and effortlessly glides you through traffic, in a quiet, unassuming manner. There’s no bark or growl from the engine, rather a calming, reassuring presence.

We need to talk about the ride quality, though. From the driver’s seat, luxurious it is not. Although primary body control is fine, the way the car crashes over even the most innocuous-looking bump in the road is not. What’s strange is the contrast to how it feels in the back seat. Perhaps that’s where the chassis engineers spent most of their time.

This car’s spec is that of a Korean domestic market car, with robust all-weather tyres and suspension tuned for negotiating Korea’s scarcely believable number of speed bumps. A different tune for the US and other markets is promised.

The uncomfortable ride up front is a shame, because the front cabin is a more interesting place than the back, with quilted Nappa leather and real wood (beech and ash trims are offered, among others). The wood feels like wood, the metal feels like metal, and everything is executed with a premium mindset. It even extends to the inside of the door bins, which are as nice to the touch as the rest of the cabin.

There’s some clever technology too. Indicate, and in the digital instrument binnacle appears a camera image of your blind spot. It’s a welcome and useful piece of safety kit. The infotainment screen is a nice one too. It’s quick to operate, even if the lack of perceived quality surfaces when you recognise the graphics from other Kias.

The K900 is really at its best at isolating you from the outside world. Seoul’s traffic isn’t for the faint-hearted, with lanes frequently swapped and aggressive stopping and starting that seems only to make the traffic run less smoothly. Yet in the K900 you’re rarely bothered or wound up by it, which is a key part of any luxury model’s brief.

The K9 isn’t really an illustration of Kia moving upmarket and becoming a full-blown luxury car maker; it’s more a reflection of it needing to offer a complete range of cars in a home market where dominance with group sibling Hyundai is almost absolute.

The world is no worse a place for this car, though. Ride quality aside, I rather like it. And it makes you ponder: might Kia ever get to the point where it could offer such a car as a genuine and credible alternative to the likes of the S-Class? Perhaps. Then again, perhaps not, badge snobbery being what it is, even when you consider the astonishing progress the brand has made in little over a decade. But then we said the same about the Stinger. 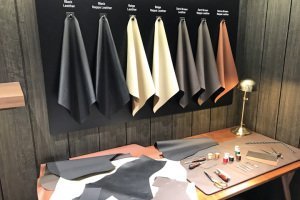 Located in a trendy part of Seoul among almost a dozen other flagship luxury car showrooms is the Salon de K9, where the K900 is on display.

Prospective buyers can drop in and learn about the car, feel the leather, touch the wood trim and listen to the sound system. But they can’t buy one: they must go to the more conventional-looking Kia dealer next door to do that.

This is a fashionable ‘brand space’, then, although it doesn’t feel overly premium. Crammed in are more than half a dozen K9s in different conservative body colours, Koreans apparently keen to see every option.