Straight off the production line in Kulim, we got to experience the first-ever Mazda CX-8 in 2.2L AWD guise 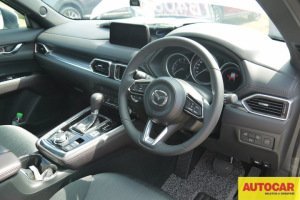 What looks like a Mazda CX-5 but isn’t? If that sounded like a trick question, it is. The answer is, the Mazda CX-8, the six-/seven-seater version of the Mazda CX-5. The trick is these three things people don’t know about it. First, it’s built on the CX-9 platform, not the CX-5 elongated, as is commonly reported. Second, it looks like a CX-5 but the fittings in the CX-8, like head and tail lights, are a different size. Third, the Mazda CX-8 is the first SUV in a non-luxury segment in Malaysia to come with Executive seats in the middle row. There’s a fourth thing that nobody knows, the price. That’s still pending approval.

What is it like?
Mazda describes the CX-8 as a “true three-row SUV” and it’s a crafty product strategy. While other manufacturers have scrambled to shoe horn two occasional seats in the cargo area of their largest SUVs, Mazda decided to produce a midsize SUV in a 2+2 executive seat configuration +2 larger rear-most seats. There is also a base model which is a seven-seater but three out of the four variants are six-seaters, demonstrating Mazda’s commitment to the concept. In a category/price range in which acreage is prioritised, taking away space that could have been one extra passenger could be a deal breaker. Its closest competitors, the Nissan X-Trail, Toyota Fortuner and Hyundai Santa Fe have five plus two seats. In addition, the travelling comfort of four executive seats, except in MPVs, used to be an indulgence only seen in luxury vehicles like the Porsche Panamera or Range Rover. Mazda has put this option within the reach of SUV buyers with a budget around the RM200,000 range.

Taking the Range Rover L405 as a similar sized SUV for comparison, the L405  is 99mm longer at 4999mm but has a shorter wheelbase (2922mm vs 2930mm) than the CX-8. This comparative dimension was a surprise because the CX-8 doesn’t look huge the way an L405 does. The CX-8 is the same width as the CX-5 but is considerably longer at 4900mm, which is how the CX-8 gets additional legroom for the “Boss Seats” in the middle row and also have a third row that can accommodate adults up to 170cm tall.  The rear-most seats appear to be more generous than those in other SUVs but are they roomy and comfortable enough on the long haul to be considered “full-size” as Mazda claims? We’ll wait for a full test drive to call it.

After the factory roll-out in Kulim, we got to swan around in the CX-8 2.2-litre AWD in the roles of driver and passenger. Our test car was the flagship  Skyactiv-D, the only diesel and turbo-charged variant. The other petrol-driven variants are powered by the naturally-aspirated 2.5-litre petrol Skyactiv-G. All have six-speed automatic transmissions with manual shift mode.

The middle row, into which I settled, had two Captain seats with a centre console in between. The console is the same as the one between the front seats and has two USB ports, cupholders and storage. The 50-50 split third row seats can be stowed completely flat in the boot. Pull the lever in the back and the head rest folds down. Let go of the lever and the seat drops into the floor with an ease Houdini would envy. There’s no mention of boot capacity but it would be around 500 litres with the third row stowed.

The interior had all the elements of a premium marque: soft touch surfaces, judicious use of glossy black highlights, matt wood veneer inserts on the doors and dash and Deep Red leather seats. The NVH damping in the cabin was so effective that we had to get out to check that we were definitely in the diesel. On the highway, there was very little noise intrusion even from the tyres on the tarmac. Meanwhile, it was scorching outside but inside, the CX-8 was comfortably cool. In a large cabin with multiple rows of seats disrupting air flow, it could easily have become stuffy but the CX-8 had individual aircon controls for the mid-section and airvents for the rear-most passengers keeping air very efficiently circulated – and quiet. With nothing else to do but enjoy the ambience, I reclined the seat and had a nap.

Then, it was my turn to drive. The CX-8 2.2L AWD is geared for passenger comfort, but it’s also very much a driver’s car – a sporty one at that. The precise steering responsiveness, handling stability and torque outlay of 450Nm at just 2000rpm made the CX-8 a surprisingly agile and nippy mover. Not at all expected from a five metre long behemoth weighing almost two tonnes on 19-inch rims. Fortunately, Gravity Vectoring Control is standard or my passengers’ lunch might have made an unwelcomed reappearance.

The size wasn’t an issue when parking either because of the front and rear cameras and 360º monitor. As the top of the range CX-8, the 2.2-litre AWD has the latest electronic safety gadgetry, Mazda’s i-Activsense, the same as in the CX-5 Turbo: self-levelling LED adaptive headlights, lane departure warning and lane keep assist, driver attention alert, blind spot monitoring and rear cross traffic alert as well as smart city brake support.

Should I get one?
The Mazda CX-8 2.2L AWD is a car that fulfils so many small but niggling desires: a far cooler way to transport six adults in comfort than an MPV. Manufacturers may try but there’s nothing stylish about tootling along in an ungainly box on small wheels, nor enjoyable about their fuel-efficient but noisy CVT gearboxes, foldaway seats, plastic tray tables and overhead DVD screens for keeping factious children entertained on long drives nor hidden storage to stow their paraphernalia. Best of all, the CX-8 is perfect for those days, when sitting at the back doesn’t mean having to give up the most comfortable seat in the car.

Mitsubishi Triton gets a new face. Order book was opened at KLIMS in November 2018 The facelift of Mitsubishi’s popular pick-up truck has made its debut in Malaysia officially following its preview last year. There […]

Rolls-Royce’s long awaited all-terrain vehicle makes its debut in Malaysia The Cullinan, named after the world’s largest diamond, formed from the hardest substance known to man is here. Rolls-Royce’s first ever car with four-wheel drive […]