The new Aston Martin DBS Superleggera is the fastest and most powerful car the company has yet produced — and the 211mph super-GT has the Ferrari 812 Superfast firmly in its sights.

The British manufacturer has revived the DBS nameplate last seen in 2012 for the new model, which effectively replaces the Vanquish S as its performance range-topper. The Superleggera suffix means ‘super light’ in Italian and harks back to the original DBS from 1967. The Vanquish name will now be saved for the firm’s McLaren 720S-rivalling mid-engined supercar, due in 2021.

While it effectively replaces the Vanquish S, the new DBS Superleggera has a different brief. Aston Martin’s exterior design chief, Miles Nurnberger, said the name was “just wonderfully romantic”, and added: “This car is what it says it is. If we’d gone with another generation of Vanquish, you’d have a different car here.”

It is based on the underpinnings of the DB11 and shares the same turbocharged 5.2-litre V12 engine 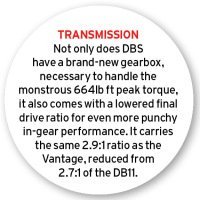 The new DBS Superleggera is based on the underpinnings of the DB11 and shares the same Aston-made turbocharged 5.2-litre V12 engine. The unit has been reworked to make 715bhp, compared with 630bhp in the DB11 AMR. In the Superleggera, the engine generates 664lb ft, available at 1800-5000rpm. That’s 148lb ft more than the DB11 AMR.

The Superleggera sports a bolder front grille, along with new headlights and tail-lights, to further differentiate it from the DB11, as part of Aston’s plan to put more space between the cars in its range. It is the first car not to feature the brand’s winged logo on its rear boot lid, with the name Aston Martin spelt out there instead.

Also new is a quad exhaust system, which has been tuned to produce a “more expressive” noise, according to chief engineer Matt Becker. That makes it 10db louder than the DB11. Becker added: “We don’t just want more noise, we want quality noise.”

The bodywork features a front splitter, extensive underbody aerodynamics, a rear diffuser and a new Aeroblade 2 rear wing, generating 60kg of downforce at the front of the car and 120kg at the rear. The 180kg total downforce is the most of any road-going Aston Martin, yet the DBS produces the same drag as the DB11, which makes just 70kg of downforce.

The DBS Superleggera has a dry weight of 1693kg. It sits on bespoke Pirelli P Zero tyres, with 21in wheels.

Despite those figures, Becker said the car has been designed to combine comfort and performance. “We wanted to develop something that’s incredibly fast but feels Vantage-like in its size and response,” he said. “The performance figures might look scary —and this car is incredibly quick — but you don’t have to be a hero to get the most out of it performance-wise.”

Becker said extensive tuning work has been done on the ESP and traction control to cope with the torque and how quickly it builds up. He added: “It has a playful nature. If you slide the car and know how to drive, it gives you all the information you need to make the right decision about when to put your foot on or off the throttle.”

Aston Martin is targeting existing Vanquish customers as well as Ferrari buyers who want “something that is as quick but less intimidating”, according to Nurnberger. The DBS Superleggera follows the DB11 and Vantage as the third product in the firm’s ‘second century’ plan to launch seven models in seven years, and Nurnberger said that broadening the product range will enable Aston Martin to push for customers who aren’t part of its existing base.

The DBS Superleggera is due to go on sale later this year in coupé form, with pricing starting from £225,000. A Volante version, which has already been spied testing, is set to arrive in early 2019.

»WE RIDE IN THE NEW DBS

ASTON NETS SILVERSTONE TEST BASE
Aston Martin has secured the rights to use Silverstone’s Stowe Circuit for the testing and development of its models. The British marque will have a permanent presence at the 1.08-mile-long, eight-corner Northamptonshire track, which is located on the opposite side of the Hangar Straight to Porsche’s Experience Centre. Engineering boss Matt Becker said that Stowe is “the perfect location to develop the next generation of Aston Martins”. Stowe will become Aston Martin’s second circuit-based facility, the other being its Nürburgring Performance Centre site next to the German track. The company also regularly uses the MIRA Proving Ground as part of its road-testing programmes.

When the history of this Aston Martin era is written, it will be noted how the company — soon to offer the public a chance to invest via a new share issue — employed every available asset to add value to it.

The new DBS is part of that. Aston has always been a ‘usual suspects’ kind of company, underpinned by loyal and wealthy collectors who desire any worthwhile new limited edition model.

The share offering will return to current investors some of their original outlay, hopefully at a tidy profit. You could argue that they deserve it, too, given the massive improvement they’ve sponsored and their extreme wisdom in hiring current CEO Andy Palmer.

The DBS is the latest link in the initial public offering (IPO) chain. 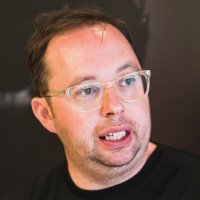 Where does this car sit in Aston Martin’s line-up?
“It’s a much more focused place in that GT-but-still-comfortable territory.”

What are you doing to differentiate each new Aston Martin?
“A lot of it comes from the grille and the lights, the eyes of the car. We looked back a bit to cars like the DB3 and DB4: we never want to be retro, but we want to capture that spirit.”

What’s the focus of the DBS Superleggera?
“I describe my job as taking words and defining 3D shapes out of them. We define cars as characters, and they have to fit in the Aston Martin ‘story’. This is the ‘brute in suit’: if you look at the form and muscle on the bonnet, there’s that Incredible Hulk stretch going on under the skin.”

Did you take any design cues from the original 1960s DBS Superleggera?
“It’s more the spirit than the style. The name looks fantastic on the hood of our cars, and the meaning was there. We want to be romantic but never retro.”

The 1.5-litre seven-seater, priced from RM72,900, is eligible for the fuel subsidy to be initiated later this year Perodua has launched the all-new Aruz. The seven-seater rear-wheel drive SUV is available in two trim levels, […]