It is hard to ignore the headline figures; 503 bhp and 700 Nm of torque. Equally important, is the Mercedes-AMG C 63 S a saloon which you can live with every day?

Even in today’s standards, these are not small figures. And when you compare this with many thoroughbred sports cars in the market, their outputs typically fall in this range. But, what about the Mercedes-AMG C 63 S? It is a compact saloon with the heart of a GT shoehorned under its bonnet.

And this why I feel the Mercedes-AMG C 63 S belongs in a quite an odd space. To the layman, it is still a C-Class. To the enthusiasts, however, they know what’s up. But then the question comes, does Mercedes-AMG intended the C 63 S to be a daily driven car, or is it just another novelty item for the wealthy to play with? 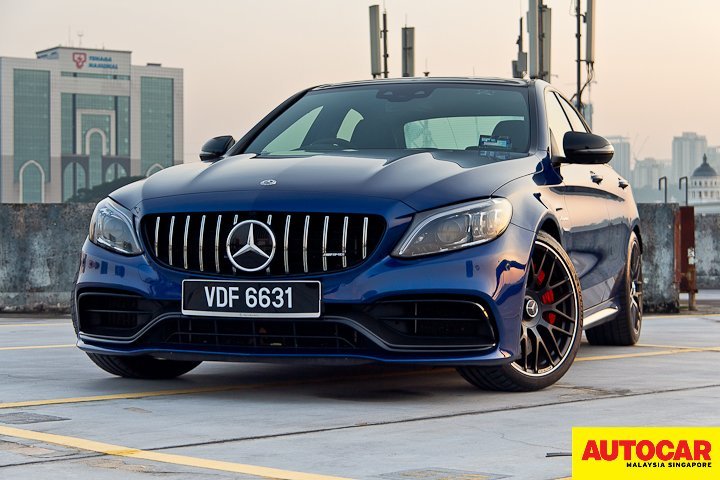 The reason why it is in such an odd space because, unlike the two-door version, the four-door version doesn’t look too far off than a C-Class saloon, or the few pretenders you see driving around. But, if you’re truly in the know, then you’ll know in a beat that the badging isn’t fooling anyone; the brakes, the ‘V8 BITURBO’ badging, the Panamericana grille, and the way it sits on the ground.

But have a closer look, the real deal has large 15.4- and 14.2-inch steel brake discs at the front and rear respectively, as well as the six-piston callipers at the front hiding behind wide 19-inch wheels wrapped in Michelin Pilot Sport 4S. Moreover, the optional AMG Performance seats and the AMG steering wheel buttons in the interior are telling that this is not a car to funk around. 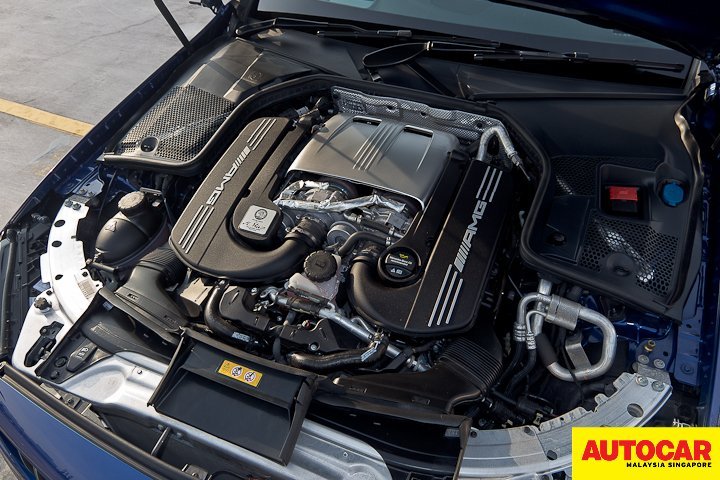 Numbers aside, can the Mercedes-AMG C 63 S driven every day? If you’re familiar with the C 200’s up to the C 43’s, then the C 63 s is still familiar territory, albeit with driver-focused features. Build quality is what you can expect, the interior outfitted with high-quality materials which not only looks the part but exudes refinement and quality. And the IWC analogue clock face is a nice touch.

What’s different here is that the steering wheel is flat at the bottom and at the sides, while the AMG steering wheel buttons which are exclusive to the current crop of AMG V8 cars. This allows instant access to the car’s traction control system, adaptive dampers, exhaust valve, auto start-stop, and gearshift modes. 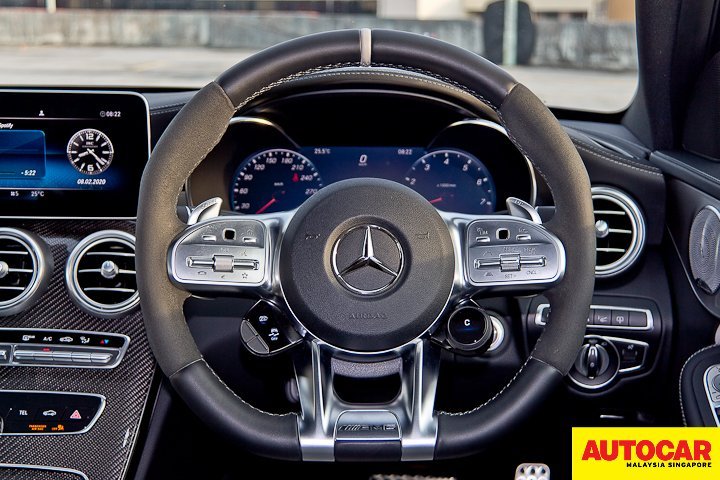 While the jog dial on the right gives access to the drive modes with a simple twist of the dial or pressing the screen to select Individual drive mode. While switching the 3-stage ESP to ‘Off’ enables you to choose the TC level, from zero to nine. That’s also a thing in the AMG GT R Pro! Moreover, the AMG Track Pace package provides the tools for use in a safe environment.

The optional AMG Performance seats do provide plenty of lateral support from the adjustable thorax and thigh supports but as in the pre-facelift model, plusher and thicker cushions for the glutes and back are still very much desired. Also, the white ARTICO inserts tend to collect dirt easily over time. It is very racy at up front, however, it’s still very much a C-Class at the back. The rear seats can seat two adults and are 40:20:40 foldable, while the 480-litre boot space remains the same. Driving the Mercedes-AMG C 63 S doesn’t feel foreign, so much so as to like a firmed-up C-Class with an abundance of power available. When driven conservatively in ‘Comfort’, the C 63 S is a very civilised car, which glides smoothly with the exhaust note is barely noticeable when the valve is closed. Though the ride is coarse even in the softest setting. But besides that, going to the shops is something the C 63 S can do easily.

Ultimately, the performance potential available from the drivetrain and chassis is irresistible. The engine does have plenty to give, while the 9-speed automatic gearbox is snappy in its most aggressive setting. Moreover, engaging launch control in the mid-life refreshed model is now simpler; Set the drive mode in ‘Race’, press on the brakes and fully depress the throttle. Also, the exhaust note is much louder when the valve is opened. 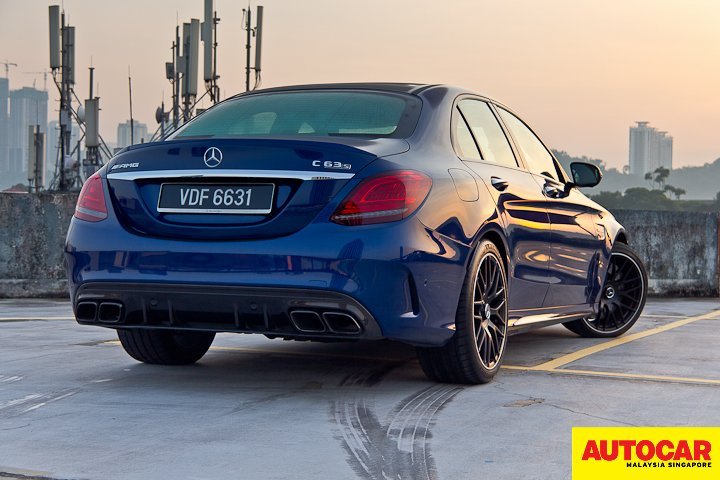 Handling wise, it’s a predictable car to drive spiritedly, while the Michelin tyres are a good match with the chassis. But, as the dust settles, you’ll soon realise that it has too much power for Malaysian roads. Fuel consumption? 14.5 L/100km (6.89 Km/l) combined is the trade-off for big performance numbers.

However, it is still just as practical and friendly to use as the next C-Class; Although the front seats lack plushness, the rear seat passenger for the night was a friend’s mum, she had no complaints. And having that said, being able to ferry friends — and do chores the next day — around in a car with a brutal V8 gave me quite a giggle.

Should I buy one? 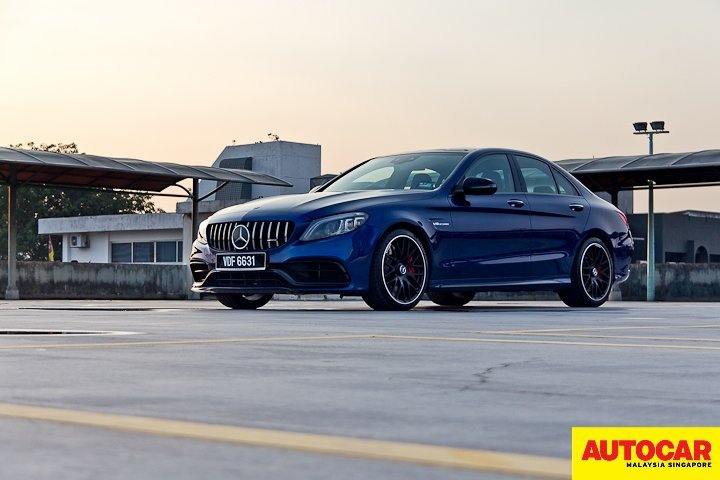 The Mercedes-AMG C 63 S does what the AMG GT Coupes can’t, while it’s smaller and less pricey than the AMG GT 4-Door Coupe. While the RM768,888 on-the-road price makes this the more affordable V8 Mercedes which you can own, which is likely due to the more common four-door body. I’d like to think of it as sharing dry-aged wagyu steak with three other people if you want to.

Tester’s Note: Yes, you can drive this every day, no problems. And it is just as practical like the regular C-Class models. However, the fuel economy and hard front seats are quite the letdown. In a way, you could look at the Mercedes-AMG C 63 S as a homologation special. And if money isn’t a factor, the enjoyment per kilometre you’ll get will be very high.