The CX-5 is Mazda’s best-selling model and the all-wheel drive Mazda CX-5 Turbo is the new flagship variant. It now has the performance to match its dynamic looks. The 2.5-litre turbocharged engine’s output is 227bhp, compared to 192 in the 2.5-litre naturally-aspirated. It is the most powerful SUV in its segment.

What’s It Like?
The Mazda CX-5 Turbo is a lot more responsive than the NA version. The additional 163Nm of torque peaks at much lower rpms – 2000 vs 3250 – and makes the difference between being tailgated and leaving the tailgater trailing in the wind. It looks the same except that the rear nameplate sports a red “T”, the only sign of its super power.

It’s the fastest mover of its competitors from zero to 100 in 7.7 seconds with a top speed that’s twice the legal speed limit. The sprightly performance is enabled by various techs that ramp up to maximum output with minimum turbo lag. To be fair, the NA is still the fastest NA in its segment – and, it didn’t feel slow until I drove the Turbo.

Gravity Vectoring Control Plus limits body roll when manoeuvring by applying the brakes to the outer wheels as the steering direction is turning back to straight. As a result, there’s faster recovery from weight shift so the driver can tap into the additional power with confidence. The difference can also be felt by passengers, especially those who may be prone to car sickness, as the car is more stable. GVC Plus also makes travelling long distances less stressful and tiring because the passengers don’t tense their body muscles so much to counter motion forces.

Should I get one? 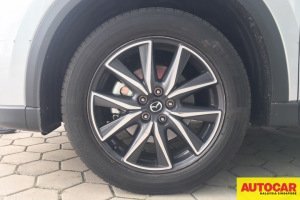 This is a really competitive and very diverse segment. Up against the Mazda CX-5 Turbo are the Honda CR-V, the Nissan X-Trail and the Subaru Forester in the Japanese market segment. However, there isn’t any real comparison because the naturally-aspirated CX-5 already outperforms them for power and features.

The brutal truth: CX-5 Turbo is in a league of its own. It has no Japanese market segment rivals. It is also the most powerful, the best specced and is the only one of the four with automatic transmission. The others are CVT. The CX-5 also has the advantage of being attractively designed inside and out.

Moreover, the CX-5 Turbo’s handling dynamics, style and performance take it up several notches into a higher category to compare against, the European SUV market. The minimised body roll and stiffer springs, compared to other Japanese cars, puts its driving dynamics more like something coming off a German production line than French.

Not everyone who likes European-style driver-centric sporty dynamics, handling and power can afford the massive jump in price from the Japanese segment. The difference can be over RM132k when factoring vehicle dimensions, drive train and output for the closest physical comparison.

The CX-5 Turbo is the higher price worth paying. It gives German-style driver engagement at a Japanese price. It is not by any means a compromise. It is what it is, superb (and it’s better specced than the Germans for active safety equipment).

Looking for a Mazda CX-5? Find yours from over a hundred pre-owned Mazda CX-5 SUVs at //www.motortrader.com.my/cars/MAZDA

2021 Toyota Innova will be available in three trim levels The 2021 Toyota Innova range has updated styling and features and additional safety systems as standard. Customers can place bookings for the new Innova now. […]

The Mercedes-AMG C 43 may look like an everyday C-Class but what lurks beneath is far from ordinary. Brutal performance with daily driving civility and practicality in a sensible package I discovered not too long […]

Volkswagen Passenger Cars Malaysia (VPCM) has now opened bookings for the Volkswagen Arteon. The one big question is the price; the fully-imported R-Line variant will be between RM290,000 to RM310,000. There are no release dates […]