The 2019 Mini Countryman Plug-In Wired is a taster of things to come, near-fossil fuel free mobility within a 40 km radius.

The future of an all-electric mobility is near and cars like the 2019 Mini Countryman Plug-In Hybrid Wired is a glimpse of things to come. Using little to no fuel everyday would make this car a guilt-free driving for many who are looking to reduce their carbon footprint, but can Plug-in Hybrids help us ween from fossil fuels? 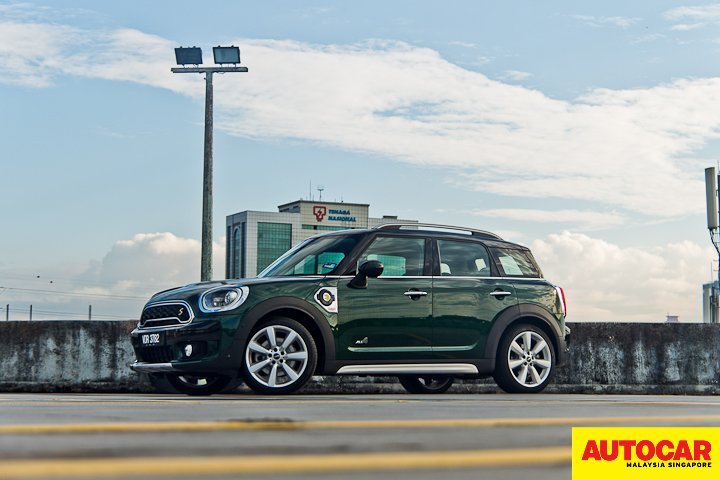 The Mini Countryman Plug-In Hybrid Wired may not be the last word in efficient aerodynamics, but comparing the plug-in hybrid electric vehicle (PHEV) Countryman with its sister models, there are efforts taken to reduce aerodynamic drag. Like the front bumper, there are pseudo intakes which don’t let air in, but help direct air into the vertical slots in the outer edge to channel and redirect air in the front wheel wells across the outer surface of the wheels. Reducing aerodynamic drag from the rotating wheels. But other than the Mini Electric badges and the yellow ‘S’ logo, the Countryman Wired looks pretty much like a non-PHEV model, which it looks less stereotypical or purpose driven. If it does so in theory, then it would be pretty much look like a BMW i3 with the odd-sized skinny tyres and all that.

Sticking to what has been available on all Malaysian spec Countryman models, the Mini Countryman Plug-In Hybrid Wired comes with LED headlights with cornering lights and bulb type signal repeaters, daytime running lamps, and LED fog lights as standard. 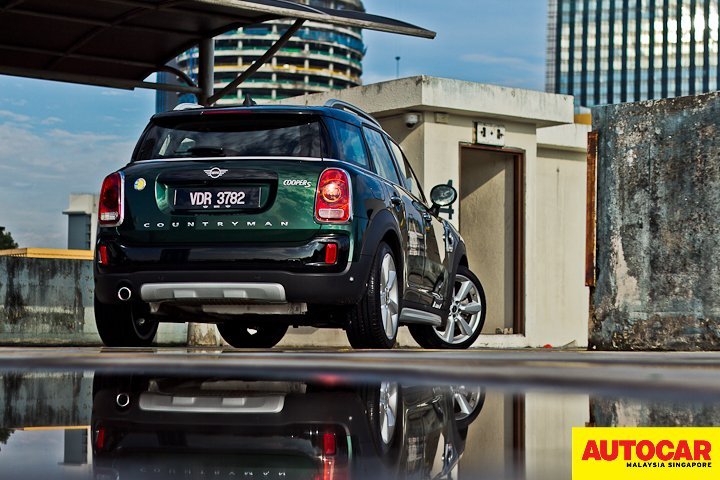 Inside, the Countryman Wired’s interior is a familiar sight, but with some adaptations made. The look and feel is the same as well; you won’t find any sharp edges with many soft-touch surfaces on the dashboard, where the only hard surface found is the Piano Black trim with the mood light illuminating through in the dark.

The compact sized binnacle may be tiny in comparison with most cars, but it has much of the PHEV Countryman’s vital information. 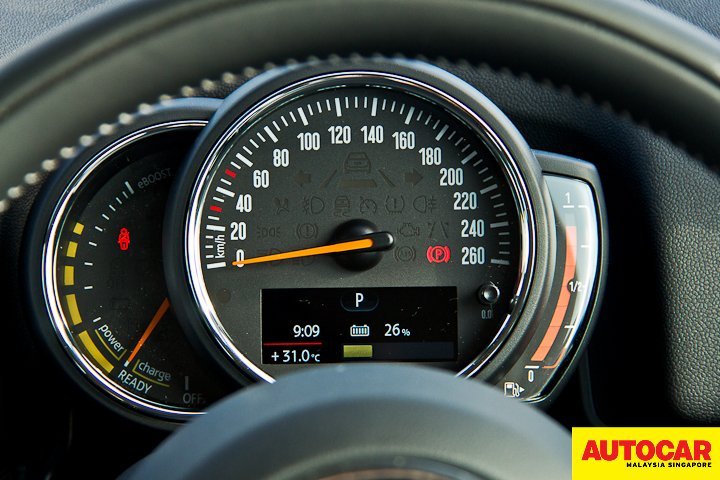 Instead of engine speed, the orange needle tells you how much power is being used, and the yellow bars represents the amount of electrical power is able to drive the car. Moreover, the yellow bars did remind me much of the old Duracell PowerCheck AA batteries. The 8-way electrically adjustable leather seats does offer a good level of comfort and lateral support from the tall side bolsters. The seats also come with a manually retractable thigh support which help provide additional seat support for leggy individuals. 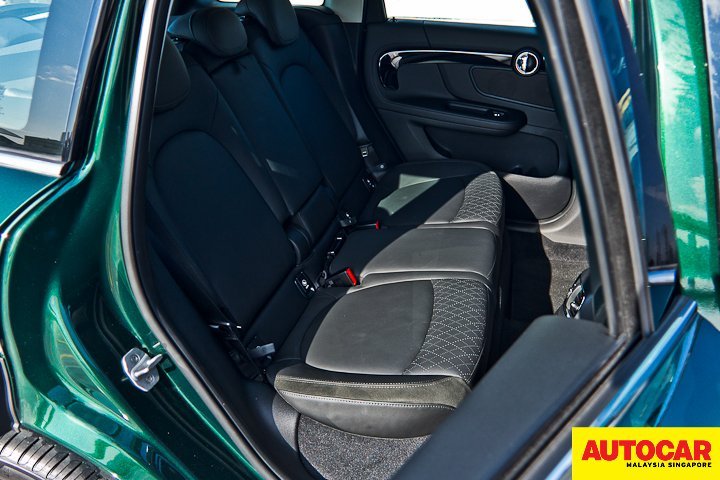 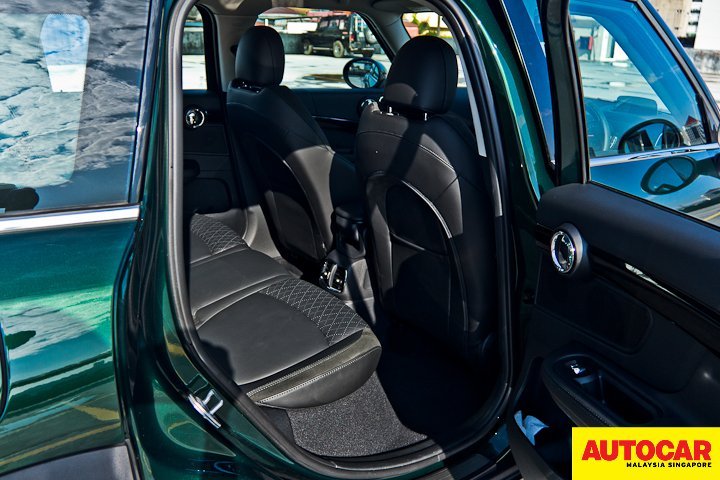 At the rear, there is enough room for two adults with decent amount of leg and head just like in the non-PHEV countryman models. It is impressive to know that the electric drivetrain and battery is neatly packaged directly under the back seats. The only downside here is that the rear seats lack lateral support. These seats here also come with ISOFIX anchor points guides by default. 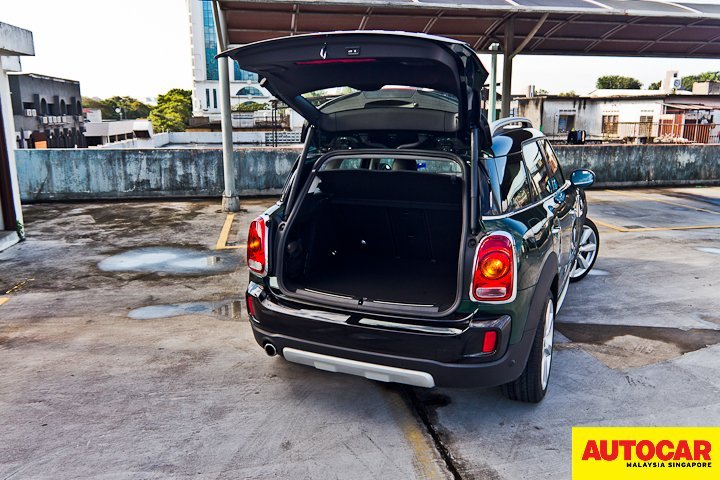 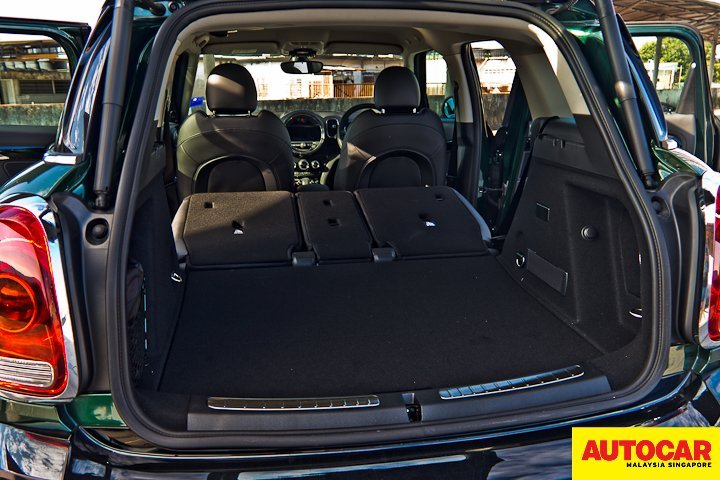 The rear hatch can be lifted via the keyfob or by kicking the underside of the rear bumper. The aperture is wide and tall which allows persons to load and unload large and bulky items. The boot capacity is rated at 405-litres with the rear seats up and folding them down flat frees up to 1,275-litres. Also not forgetting to mention that the seats fold down 40:20:40. The Countryman Wired comes with the picnic bench, which is hidden from sight under the boot floor. Accessing the bench is simply lifting the lid, then pull towards you. Underneath is a small storage space to store your Type 2 charging cables. Being at the centre of it all in the Mini Countryman Plug-In Hybrid Wired is a 8.8-inch touchscreen with sharp graphics and fluid animations of the Mini Connected infotainment software.

The Mini Connected infotainment system features a wide array of functions and features. It has six main features; Mini Connected, My Mini, Navigation, Notification, Communications and Media/Radio. There’s plenty to go through all of them, but this system is easy and straight forward to use, no fuss, no headaches. The Countryman Pure is compatible with the Mini Connected app available on the Apple App Store and Google Play. This app allows the away-from-vehicle status updates such as fuel level, remaining range and mileage, as well as Scheduling Assistant and Mini FindMate which help track forgotten tagged items left behind.

The standard HarmanKardon 12-speaker system performs better than expected. Tested with lossless FLAC files, sound reproduction is clear, crisp and faithful with plenty of punch from the subwoofers beneath the front seats. PHEVs stitches the current and the future together, pushing and pulling. Mini Countryman Plug-In Hybrid Wired’s powertrain is the combination of BMW’s B38 1,499 cc, three-cylinder engine with direct-fuel injection and double VANOS. At peak, the three-pot petrol engine alone makes 134 bhp at 4,400 rpm and 220 Nm of torque at 1,240 – 4,300 rpm. Mated to the engine is a six-speed automatic transmission and driving the front wheels only.

As mentioned, the electric motor at the rear makes 87 bhp at 4,000 rpm and a peak torque of 165 Nm from 0 – 3,000 rpm. Combined, the PHEV Countryman makes 221 bhp and 385 Nm of torque. Basically the electric-petrol Countryman the most powerful non-John Cooper Works in the range. In addition, having the electric motor in the rear effectively makes the Countryman Wired an all-wheel drive model. 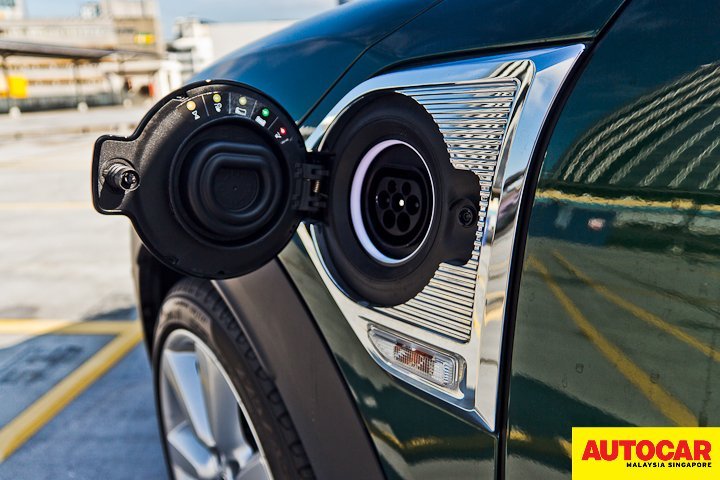 Storing charged electricity is a 7.6 kWh lithium-ion battery which delivers an all-electric range of up to 40 km and a top speed of 126 km/h, which is more than adequate for daily city driving. Charging the batter back up to full takes 3 hours and 15 minutes via a 240-volt socket. 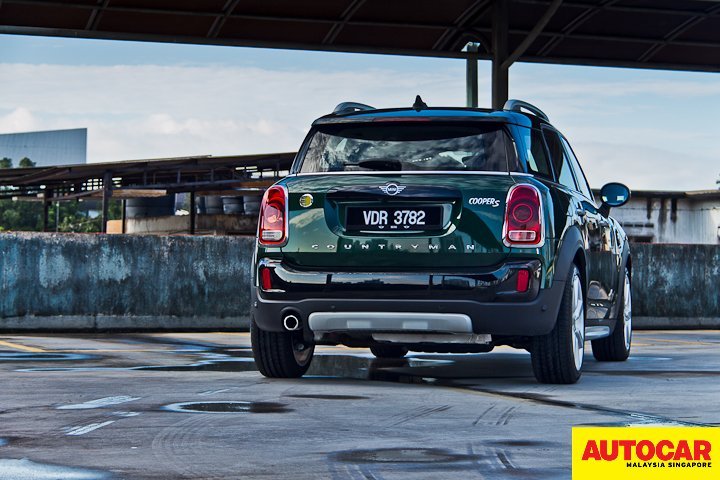 The Mini Countryman Plug-In Hybrid Wired drives just like a Countryman does. Refinement and isolation from the outside world, where wind noise and road noise are near imperceptible within legal driving speed is a given. The interior panels are together snuggly without any audible creaks or rattles.

The Mini’s PHEV drivetrain is mostly electric centric from plug out at point A to plug in at point B, only when the battery sinks down gradually from 5 to 0 percent is when the combustion engine switches on more often, or when the need for peak power is needed immediately. 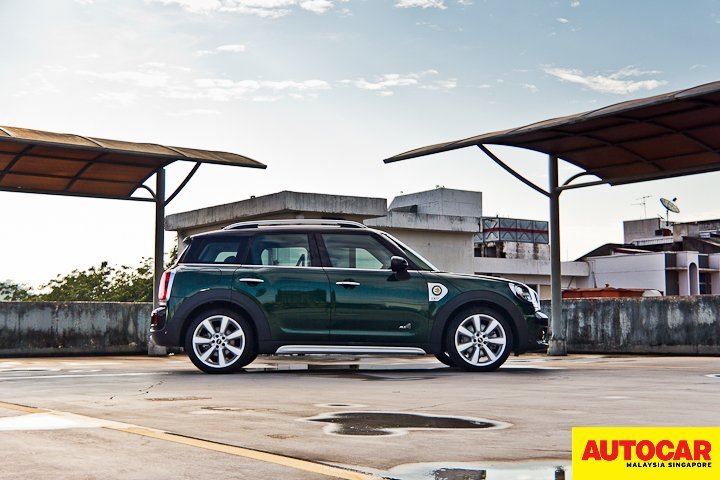 For first timers, the driving experience can be quite surreal one. With a full battery, the 87 bhp motor is capable of driving the Countryman’s 1.8-tonne kerb weight up to speed quickly, its not Tesla quick off the line, but good enough. It would be also intriguing to see that the engine temperature gauge reading ‘Cold’ while travelling at 110 km/h, while overtaking noisy fuel-chugging cars on the slower middle lane.

With three main driving modes and three hybrid modes, the Countryman Wired’s battery usage strategy can be tailored to suit your driving style or patterns. For example, with the engine drive mode is switched to ‘Green’ and eDrive mode to ‘Save’ help preserve battery level, without consuming much fuel. Setting the engine to ‘Sport’ with the same eDrive mode help to top up the battery with a much more aggressive regenerative braking while on the road but at the expense of fuel consumption.

Mini claims that the Mini Countryman Plug-In Hybrid Wired consumption figure stands at 2.1 l/100 km combined. This is true in the real world provided the battery is constantly charged when not in use. However fuel economy can differ widely depending whether there’s a charging station at the destination, driving style, and road and traffic condition. 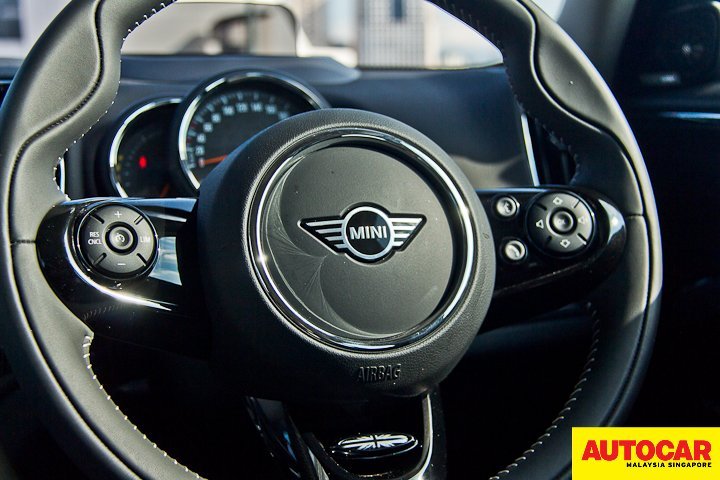 The springs and dampers allow agile driving without sacrificing much of the comfort and absorption of rough vibrations from the stiff runflat tyres. That said, the suspension is on the firm side of things, but they do well in keeping the vibrations away from the cabin space and does give a sense of speed. It has a sense of connectedness to the road which can be felt from the steering wheel without the harshness travelling into the wrists. Like in all Countryman models, the The Mini Countryman Plug-In Hybrid Wired provides a wide aperture ahead, while the curved windscreen and the toggle switches give a feeling of being in an aircraft. That said, many of the controls, dials and switches are accessible without your back ever leaving the perforated leather seat. With the hybrid powertrain at full chat, the Mini Countryman Plug-In Hybrid Wired is quite an impressive performer, the petrol engine and electric motor’s low-end torque does take it up to speed rather quickly. The electric drive unit does most of the sprint work at rear end in the initial acceleration phase while the petrol engine takes over to bring it up to speed. However, lacking two gears and one cylinder, the Countryman Wired is only able to reach 193 Km/h.

And with the electric motor driving the rear wheels, the ALL4 badge really meant that its effectively an all-wheel drive vehicle. That said, its stays in line through the bends predictably and well, but not as entertaining as in the pure petrol-driven models. The steering is direct and has some weightiness to it, but lacks much of the feel due to it being electrically assisted. But not all is lost as there are little bits of the information steering wheel and the Countryman still has the seat-of-the-pants feel of the car is doing. The handling characteristic is go-kart-like but not in the literal sense.

Should I own one? If you’re truly committed in reducing your carbon footprint saving money on mileage in the long run then the Mini Countryman Plug-In Hybrid Wired is one you can consider. Its fully spec-ed with the refinement expected from a premium maker.

Although the 40 Km full-electric drive might sound insignificant, but you could drive the PHEV Countryman -almost- without using any fuel provided if there are wallboxes or charging stations at home or available for use at the workplace.

Tester’s Note: The Mini Countryman Plug-In Hybrid Wired drives much like a battery electric vehicle than a PHEV and pretty much suited for urban commutes. However, the petrol engine is still needed for longer commutes.