The 2019 Audi A5 Sportback 2.0 TFSI quattro is both practical and sporty while proving that being lightness doesn’t have to come in a small package.

New cars these days weigh much heavier than they used to be. The increase in overall size, creature comforts, safety features and hybridisation are instrumental to the up trend of ever-increasing vehicle mass.

Audi, however, does it differently; the brand takes on driving enjoyment and ride quality while keeping the weight of their cars in check. And thanks to the 2019 Audi A5 Sportback 2.0 TFSI quattro’s Audi Space Frame construction (ASF), this compact executive saloon weights much lesser on the scales than it looks. Audi has made its official comeback in Malaysia, which the A5 Sportback sport 2.0 TFSI quattro is one of the 11 offerings available between the A4 and the A6 saloons. Moreover, the sleek fastback body style offers additional practicality when it comes to loading items into the rear boot.

Styling-wise, the sharp belt lines and creases on the front bonnet are surfaces are details not common even on many premium cars to date. It is clinical but has a sportscar-like presence which leaps out from the rest.

When it comes to illumination, expect nothing less than LEDs paving the way ahead and indicating drivers behind of your intentions. A larger vehicle will and always translate to a roomier inside. And despite having a lower roofline than the A4 or the A6, the A5 Sportback’s greenhouse allows much light inside. Ingress and egress are not much of an issue either.

The Audi A5 Sportback has deep and wide enough door pockets for 1-litre drinks bottles and other personal belongings at all four sides. The front and rear passengers have access to additional cup holders at the front end of the lower centre console and in the retractable rear centre armrest.

Hidden under the sliding centre armrest is a storage compartment large enough to house personal items. Also, you’ll find a cigarette lighter, AUX and USB port. Besides the aft and fore adjustability, it is also height adjustable for added comfort when driving on long distances.

The 12.3 – inch TFT Audi Virtual Cockpit and 8.3-inch MMI monitor work hand-in-hand, especially when it comes to the multimedia functions and navigation. That said Audi’s MMI system is one of the easiest to use infotainment systems tested so far.

Sound reproduction from the 6 channel amplifier with 10 speaker Audi Sound system is crisp and nuanced. And with the 180-watts local output, the sound system is well calibrated to deliver above-average sound quality at high volume without clipping and harsh distortions. 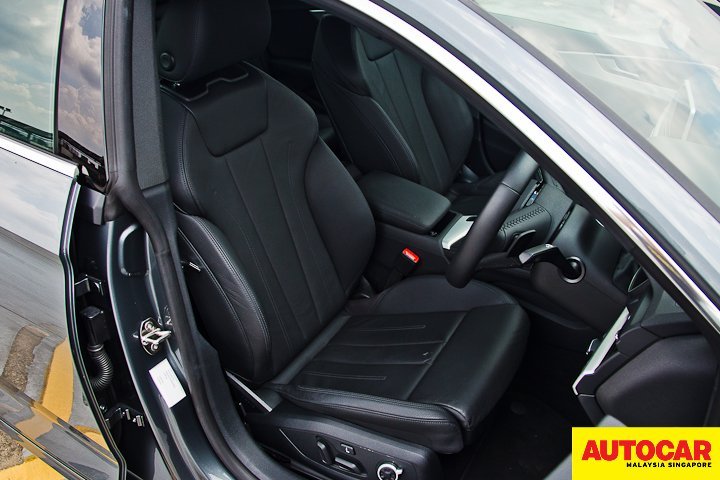 The A5 Sportback is one of the nicest cars to be in. The front seats are 8-way power-adjustable with two memory presets just for the driver seat. And for people with long legs, the manually retractable thigh supports help reduce strain on the ankles. Better yet, the A5 Sportback comes with pneumatically adjustable lumbar support with massage functions.

A function likely to be seen in segments above, the seats provide both driver and passenger three massage modes: Wave, Stretch, and Knead. Each of which has three intensity settings to help alleviate soreness when travelling on long distances. Moreover, the seats also provide adequate lateral support while driving along twisty roads.

At the rear, the Audi A5 Sportback quattro can seat two adults with ample head and legroom thanks to the low slung seats. Also, the occupants here also get their own climate zone.

Being a fastback, the rear decklid provides a wide and unobstructed access to the 480-litre boot space. Fold the 40:20:40 rear seats down expands the boot capacity up to 1,300-litres. With the seats folded down flat, this makes it easier to load something like a mountain bike or an IKEA parcel easily. Moving the Audi A5 Sportback quattro is a 1,984 cc inline four-cylinder engine making 249 bhp at 5,000 – 6,000 rpm and 370 Nm of torque at 1,600 – 4,500 rpm. Mated to the engine is a 7-Speed S tronic DSG transmission, which houses both the transmission and the quattro permanent all-wheel drive system’s centre differential in one package.

The drivetrain is not only responsive but frugal, too. The A5 Sportback sport 2.0 TFSI quattro clocked: It is quite an easy-going car to drive in urban spaces. The airy interior also lets the driver lookout and around without much obstruction or anything getting in the way, including the 8.3-inch monitor. The steering wheel fits well in the palms and doesn’t feel chunky, also the hydraulic power steering makes light work navigating around tight corners and bends.

Much of the weight savings can be felt when being behind the wheel. The car feels light on its toes and direction changes are effortless, and getting up to speed doesn’t require much persuasion from the engine. And the stiff lightweight chassis does provide most of the A5 Sportback quattro’s refinement and competent handling capabilities.

That said the Audi A5 Sportback quattro drives competently on the limit; the handling balance is neutral on dry roads, while on wet and slippery roads is when the quattro system truly shines. Power is sent to the wheels with the most traction seamlessly eliminating much of the unwanted understeer and oversteer. In a nutshell, the Audi A5 Sportback sport 2.0 TFSI quattro covers all bases without compromising much. If I were to describe it in a couple of words it would be practical, drives well, easy to use and practical. It has presence, but quite clinical. Moreover, the 5-year unlimited mileage warranty and official aftersales support make it even more appealing.

Tester’s note: While the quattro all-wheel-drive system enables the A5 Sportback to drive on rails, it is the dimensions, convenience and refinement which makes it a fierce player in the segment. With that, we’re giving it four and a half stars.

GoCar Subs reductions up to 50 per cent exclusively through the GoCar Official Store on Shopee Until 31 January 2021, GoCar is offering 50 percent reductions on selected GoCar Subs monthly plans. This is exclusively […]