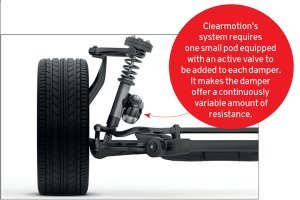 Groundbreaking proactive suspension technology, which can essentially stop all car body movement caused by rough surfaces and cornering, will make its road car debut next year.

Developed by US engineering firm Clearmotion, the so-called ‘digital chassis system’ is said to be significantly more proactive than technology currently featured on even the market’s most luxurious cars, including air-sprung models such as the latest Mercedes-Benz S-Class and Bentley Continental GT.

“Our technology is the fastest proactive ride system that exists today,” Clearmotion CEO Shak Avadhany told Autocar in an exclusive interview. “It really delivers an almost instantaneous level of isolation that’s so noticeable you’d feel the difference in the first 10 feet of driving.”

Avadhany said the technology, which benefits from control software acquired from a 30-year skunkworks project at Bose called Project Sound, works by turning a car’s dampers into actuators. This allows them to actively, rather than passively, move in response to the surface beneath them. Avadhany said it’s drawn the attention of five major manufacturers but he refrained from revealing which.

“In our system, we equip the damper with an active valve that allows the fluid inside to pass in and out,” said Avadhany. “We have real-time accelerometers that are reading the road and reacting instantly, with motors providing the car with unparalleled ride quality.”

The set-up is being developed for introduction on a low-volume vehicle in 2019 before reaching the mass market in 2020 and demonstrators have shown it’s already at an extremely advanced stage. Recently released footage of a modified BMW 5 Series with Clearmotion’s tech shows it driving over speed humps and bumpy roads with no visible body movement. The wheels move freely within the arches to soak up all surface changes. The standard car, meanwhile, jiggles and leans throughout.

Despite the system’s apparent complexity, it’s being developed with price in mind, said Avadhany, one of three Massachusetts Institute of Technology students who founded Clearmotion in 2008. As a result, he doesn’t expect a drastic increase in cost for future models that use the system.

Avadhany revealed that much of the development has taken place in the UK because of its challenging road surfaces and a “highly skilled engineering workforce”.

AUTONOMOUS CARS ARE A KEY TARGET

Although luxury cars may seem the most relevant recipient of Clearmotion’s new damper technology, CEO Shak Avadhany believes its future business will be dominated by self-driving cars.

“Autonomous cars will need to ride like magic carpets if they are to become the mobile offices many consumers hope they will,” said Avadhany. “But if we use current suspension technology, passengers will quickly realise that motion sickness will become a real problem.”

Clearmotion therefore hopes to tap into the autonomous car market early with its technology, which, it says, can reduce the symptoms of motion sickness by 68%, based on an internal test with 14 people.

“We are also working on active seats that can respond to the road surface as well,” said Avadhany. “Combine these with our dampers and then we can control the entire movement of an impact, from the road surface through to the human.”

The focus now for Clearmotion is to establish itself among the world’s biggest car makers to ensure its system can be integrated into as many vehicles as possible. Although the technology currently has no major rivals, Avadhany believes the rise of autonomous cars will quickly see competition heat up.

“Once the excitement of an autonomous car wears off and safety and pick-up times are acceptable, you’re going to see the focus of consumers change,” he said. “They’ll begin to choose which car they use based on how productive they can be in a car. This is where the race for manufacturers will be: to produce the car that’s easiest to be productive in.”