When Ford named its new car after Cortina d’Ampezzo, no one pictured it racing down the ski resort’s Olympic bobsleigh run in the hands of an F1 champion. But that is exactly what happened. Richard Webber revisits the site 55 years on in a Fiesta ST

Former world champion Jim Clark says it’s the most exciting sport he’s ever tackled. We’ll take his word for it. But if you have any doubts, he recommends a Cortina, lots of nerve, and plane tickets to Italy for you – and your doctor.”

So concludes the astonishing minute-long newsreel about the ‘Salute to Cortina Champions’ of December 1964, when road-going Ford Cortinas were driven down an Olympic bobsleigh track. You can read about this audacious (read foolhardy) event below. Fifty-five years on, we’re taking one of Ford’s current stars, the suitably game Ford Fiesta ST, to revisit the site of this historical madness.

Following a night-time handover at Treviso Airport, our eager little three-door ST pounds up the empty Autostrada before climbing deep into the Dolomites to the chic ski resort of Cortina d’Ampezzo, home of the 1956 Winter Olympics and regional epicentre for la dolce vita. There’s a particular excitement to arriving somewhere scenic in the dark, and we bed down in a hotel beside the town’s landmark bell tower in anticipation of what sunrise will reveal.

And rightly so. The next day, drifting wisps of mist can’t hide the huge, broken crags of limestone that cradle the Ampezzo Valley, their haywire structures jutting at all angles, barely softened by January’s snow.

At the base of the Tofane range on the north edge of town, we meet Gianfranco Rezzadore, president of Bob Club Cortina and former Italian international bobsleigh driver. Our rendezvous is Bob Bar, a tiny wooden shack and local hang-out nestled beside the Eugenio Monti bob track’s finish. Founded almost a century ago, the course was 1700 metres long by the 1956 Winter Games,
with 16 turns and a 152m vertical drop. Unchanged by 1964, it was just wide enough to accommodate a Ford Cortina.

The track was shortened, narrowed and artificially refrigerated from 1979 (until then, snow and ice were hand-packed) but closed in 2008. There are plans to recommission it should Cortina successfully bid to host the 2026 Winter Olympics in partnership with Milan – they’ll find out in June. For the moment, the smooth, concrete-lined track lays dormant but largely intact, so we walk its length with Rezzadore, who has piloted 3000 runs down here (not including extra-curricular jaunts aboard a snow shovel).

He says bobs used to hit 80mph on track, and that centrifugal forces pushed 4g through his spine on the ‘Cristallo’ hairpin: “I used to be taller.” Rezzadore’s sceptical that the Ford Cortinas reached the 50mph-plus claimed in the newsreel, but the dangers were very real. Back then, the huge, banked corners – easily twice my height – had no horizontal safety barriers above them. At times, the cars ran almost vertically along what were literally walls of death: sleighs have left this course with fatal consequences, including during the filming of For Your Eyes Only in 1981.

Past the pine straw-strewn lower corners, we amble uphill, where sheet ice crackles beneath our feet along the snaking ‘Labyrinth’ complex and on through yet more vertiginous banked corners. Turning to look back down, it eludes me how anyone – let alone a valuable sporting professional – could have driven an unmodified, carburetted family saloon with woolly steering, rear cart springs and 1960s tyre compounds down here in the snow. Different times indeed.

The route straightens under a bridge and into a clearing that marked the event’s start. This is where group photos were taken, Clark embellishing his race overalls and iconic two-tone lid with a fetching cable-knit sweater, before the cars took to the icy helter-skelter.

With the straights now barely wide enough for a bobsleigh, we’ll enjoy no such mischief – but we have another plan to get our alpine thrills while we’re here. You see, Cortina was a haven for racing drivers long before Clark et al arrived. Most famously, the Coppa d’Oro delle Dolomiti road race was based in the town each July for 10 post-war years along a 189-mile mountain route. The thought of period sports cars from Alfa Romeo, Lancia, Maserati and Ferrari thrashing between these peaks is spine-tingling.

These days, regularity rallies are the next best thing, and we’re going to trace the best bit of the WinteRace – an annual, snow-bound classic car rally whose seventh edition kicks off from Cortina this Friday. Its organisers point us towards part of the route that strings together a succession of mountain passes to the west. Soon after dawn the following day, we burble out of town onto a smooth, rising back road towards the first summit at Passo di Giau.

We are immediately met with hairpins – lots of them. Between corners, the Fiesta’s 197bhp, 1.5-litre blown triple offers ample thrust. Such are the incline, short straights and gearing that I’m mostly riding second, the engine scaling from 2000rpm to 6000rpm and back without complaint nor more than fleeting inductive hesitation. When shifting is required, the short-throw gearbox action is neat and doesn’t mind being rushed.

I don’t really need the sharpened throttle, heightened mapping and bass-drum overrun of Sport mode, and Normal’s lighter steering feels more natural, so I stick with that. Turn-in is immediate, and while the sub-zero temperature and polished asphalt prevent our Performance Pack-equipped car from grapple-hooking around the corners as it might on a dry British B-road, the Quaife limited-slip differential at least puts paid to any ungainly front-end scrambling – instead, it gently and progressively runs wide until a throttle lift clips us back into line. Body control impresses too – at these moderate speeds, long-wave bumps are tidily parried and roll barely registers.

But grit soon starts pinging off the underside, and beyond the treeline hefty snowbanks flank the road and glassy strips of ice leach across it. The banks close in to leave barely a car’s width of blacktop as we nip past a crawling snowplough that’s spewing a frozen white arc down the mountainside. Moments later the road disappears, so it’s steady with the throttle to retain momentum, then a little patch of black lets us add enough speed to crest the summit.

Around here, it’s compulsory to have winter tyres or chains from November to April. Our car comes with the latter, so 2236m above sea level and with frost-tingled fingers (it’s –5deg C), we’re reading how to attach our ‘Maggi Trak Auto’ snow chains to the front tyres. In a routine that gets swifter as the day progresses, we hook them up and shuffle around to feel them out. From outside, the chains make the merry jangle of Saint Nick’s sleigh, but in the cabin the constant rumble of graunching snow is underscored by a locomotive clickety-clack. Crucially, however, they provide the purchase the Fiesta needs to claw itself onwards.

There is no sound but for a whirling snow devil whispering by. It’s a moment to feel small

Before pressing on, we take a moment to drink in our location. The pass sits beneath sky-scraping Monte Nuvolau, and I can just see zig-zagging footpaths in the scree that lead climbers to the foot of its perilous vertical faces. On the peak’s far side 339m above us is an eagle’s nest of a wooden hut from 1883 – once a military lookout, it now welcomes adventurous climbers.

Our route down is a perfect sequence of hairpins with barely a straight between and, as the snow clears within a few hundred metres, it’s off with the chains and up with the speed. We carve down the mountain, past the first of countless ski areas and along frozen streams, then barely touch the valley floor and start rising again. We join a wider road with fast sweepers that the Fiesta gobbles up before the Tarmac starts to writhe again. Subsident lumps and bumps don’t worry the chassis, while broken, frost-fissured patches of Tarmac reveal its firm set-up, though without undue resonance.

Closing on Passo Pordoi, to our right is the imposing stone ossuary where 8582 German and Austro-Hungarian soldiers rested after battling Italy here during the Great War. Year-round trench warfare on this terrain defies contemplation. The road flits between clear straights and snowbound corners, so it’s on with the chains again, the heavily cambered corners helping press us into the surface as we clamber on up.

It’s blowing a gale as wind funnels through the 2239m summit’s saddle, so we don’t tarry. The snow thins on the descent, so we remove the wheel jewellery for another slalom whose switchbacks and kinks don’t let up for three full miles, plunging from windswept mountainside to sheltered forest. Trunk-shaped dents in the Armco denote the enduring timber trade; before the early 1900s tourism boom helped forge this road, wood was instead transported by the area’s numerous ice-blue rivers.

Rising again to Passo Sella (2244m), we pause on a panoramic hairpin so photographer Luc Lacey can capture the jagged skyline beyond. There are no other cars, and there is no sound but for the creaking Armco and a whirling snow devil whispering by. It’s one of those moments to feel small. 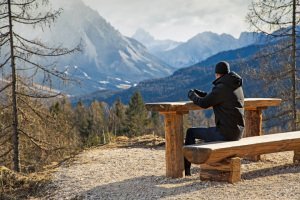 The pass itself is an ice-free up and down, then we barrel along the smooth, tree-lined Val Gardena road, skirting bizarre, precarious-looking rock formations so tall and so steep I get dizzy peering up their walls. Winding upwards again, we bounce swiftly between second and third gears before cresting spectacular Passo Gardena at 2115m where, as the sunset turns peaks to molten lava, some well-heeled skiers hitch a helicopter ride down the valley before the weather turns.

No such luxury for us. Even with chains reinstalled, it’s tricky going, the road dipping and diving as much as it twists. Approaching one particularly evil left-hander, the naked rear tyres try to overtake the fronts before a delicate dose of throttle straightens us out.

Once below the snowline, we veer east again under a freezing, clear sky, the crescent moon peeping between peaks as we home in on the welcoming lights of Cortina. It’s been a brilliant drive and, unlike our counterparts from 1964, we’ve kept our borrowed Ford largely horizontal and entirely intact. Mind you, there is one remaining Olympic bobsleigh track wide enough to drive a car down. Now we just need them to launch the Ford St Moritz. A

Their challenge was to navigate a half-mile section of the Cortina d’Ampezzo bobsleigh track used for the 1956 Winter Olympics in a collection of two- and four-door Cortinas. The cars came in road-going GT trim, which meant an uprated, 78bhp version of the 1498cc Kent four-pot with a Cosworth camshaft and a kerb weight of 864kg – though some baited gravity by driving four-up. 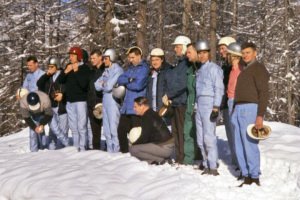 As for the results, a Ford insider reported: “It was never intended to be competitive but rather a celebration of the Cortina’s successes. However, it quickly developed into a match between the race and rally drivers, with each side doing considerably more runs than originally envisaged. The Cortinas were absolutely bog-standard – with the result that the front suspension struts broke through the top mounts.”

Competitive spirits thus unsated, a snowball fight broke out, during which Clark slipped a disc in his back, causing him to wear a corset for the subsequent South African Grand Prix (which he won). He really did need that doctor after all.