Our Spanish inquisition finds that, roof aside, this stunning drop-top loses precious little from the five-star 570S coupé 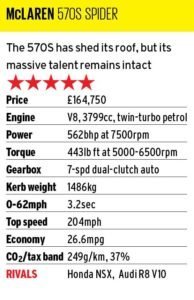 McLaren likes to call the 570S Spider its most attainable open-top – a statement not wholly unlike the Duke of Westminster telling you that the land in and around Battersea is very affordable. Well, yes: compared with an acre of Belgravia, it probably is. But attainable in a broader, inclusive sense? Not on your nelly. The Spider starts at £164,750, which means most examples will be £200k. It’s as exclusive as shale mining rights.

Nevertheless, with the outgoing 675 LT Spider originally priced from £285k, you can see where McLaren is coming from. And in marked contrast to most lesser car makers, ‘attainable’ doesn’t mean ‘cynically second-rate’ for Woking. Far from it: the coupé version of the 570S – a car available at a 911 Turbo S price tag – is as near as damn it the complete supercar and arguably only second to the God-like 720S in the firm’s ever-expanding canon.

As that car forms almost the entire basis for the Spider, much is expected of McLaren’s latest model – not just in performance but in sales figures too. Naturally, the drop-top shares the 3.8-litre twin-turbo V8 in its 562bhp format and the seven-speed ‘seamless shift’ gearbox; ditto the MonoCell II version of the carbonfibre tub and the all-round double wishbone suspension attached to it.

The chief difference, then, is a 46kg increase in kerb weight: the drawback of having the coupé’s composite roof panels pack themselves neatly away after 15 seconds of button-pushing. That the penalty is modest compared with most rivals is a familiar virtue of the MonoCell: like the 12C Spider before it, no additional buttressing is required because the 570S is not dependant on its roof for torsional rigidity. Consequently, the Spider is no less stiff than the coupé. 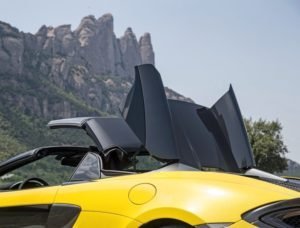 It’s practically no slower, either. McLaren reports a deficiency of 0.1 seconds from 0-124mph – and, unless you have the roof down, the drop-top will ultimately clock the same 204mph top speed. With the wind shot-blasting your hair, Woking quotes 196mph. Our left-hand-drive test car came with the optional sports exhaust, 10-spoke forged wheels and a substantial smattering of carbonfibre body parts for a final sticker price just shy of £210k.

As is the way with open-top McLarens, prizes ought to be given for spotting the difference from the coupé when the roof is up. The panel gaps and tonneau cover give it away but, otherwise, the styling alterations are pleasingly limited. This means that the 570S’s swaggering prettiness carries over intact.

As, it must be said, does the slight palaver of getting into one. The sills are slimmer on MonoCell II cars, but 16.5 stone of yours truly still tends to fall in the driver’s seat like a sandbag shoved over a sea wall. The hardship won’t stop there if you’ve opted for McLaren’s notoriously unforgiving Carbon Fibre Racing Seats, which come equipped with the kind of lumbar support that seeks to transform your 21st-century slouch into an upright posture worthy of a Swiss finishing school.

Generally, though, the interior is fabulous. You’ll need six months’ work experience on a Woking-based tech team to work the IRIS infotainment system with anything approaching intuitiveness, but the surrounding hand-built fit and finish is now almost uniformly immaculate and – under an additional layer of cost-option opulence – it looks it too. The new two-part roof functions blamelessly, and will do so up to the safety-first speed of 25mph.

Roof up, McLaren has provided the option of raising or lowering the small rear glass screen, which acts as a wind deflector once topless, and there’s even additional space for some luggage under the tonneau cover.

Roof down, the world invariably peers in and with its attention comes a fairly stiff breeze. It’s not chronic by any means, but nor is it serene: expect a ruffling of the rug even at run-of-the-mill speeds with the windows up. A modest level of bluster is acceptable, of course; somewhat less forgivable is the raucous quality of the soundtrack attempting to drown it out.

Criticism of McLaren’s turbocharged V8 in this regard is nothing new, nor is it any different from the must-try-harder censure we levelled at the coupé last year. But the Spider inevitably moves the sound closer to your ear lobes and, while its guttural brand of industriousness has an enormous and savage presence, it doesn’t induce you to drive permanently under the influence like a Ferrari 488 or Audi R8 would.

The complaints, though, do tend to dry up the moment you dip so much as a toenail in the mighty reservoir that is the Spider’s potential. Even with the memory of the 720S’s benchmark-setting explosiveness still very fresh, its detuned stablemate is spleen-worryingly fast in a way that manages to feel tractable, progressive, massive and yet not in any way outsized for the rear-drive chassis it is attached to.

Much as it was in the coupé, it is the 570S’s capacity for turning this febrile low-end acceleration into an accessible, usable and supremely tactile drive that distinguishes the Spider from almost every serious rival. In this respect, the additional 46kg proves about as consequential as lashing an amoeba to the beak of a peregrine: the car still rides superbly, changes direction preternaturally and inspires untold levels of confidence in its precision and grip.

True, overt playfulness is arguably in short supply on the road, and there is no mistaking McLaren’s brake-steer tech when it cuts in on Spanish hairpins – but with the adaptive handling set to ‘normal’ and the powertrain to ‘sport’, driving a 570S along a challenging road still ranks as one of industry’s greatest privileges. Power, pliancy, lightness, mechanical rigour and technological prowess collude nowhere more gratifyingly. The only critical faculties required are hands, feet and hips.

It is this recognisable McLaren trait – the ability to make nonchalant GT-style progress without tangibly or spiritually diluting the incision and controlled savagery expected of a modern-day mid-engined supercar – that threatens to place the Spider in a class of one. Nevertheless, there are elements that keep the latest model from the kind of stratospheric orbit where rivals appear as mere dots. The V8’s engine note, a middling gripe in the coupé, is brought to the fore by closer contact. It is not bad, yet nor is it a reason to seek out or spend time in the car – and that’s a demerit given the price and competition.

As a result, there are fleeting instances when it might plausibly be more rewarding or edifying to be in a 488 Spider or even a Lamborghini Huracán. More often than not, though, such thoughts are nullified by the 570S’s extraordinary drivability, its suppleness and its uncanny talent for keeping your continued enjoyment on an apparently endless feedback loop. Ten per cent less attainable than the coupé it might be, but the Spider easily qualifies for the same maximum quota of stars.

McLaren’s commitment to carbonfibre construction extends all the way back to pioneering its use in Formula 1 cars in the early 1980s and its fascination with the lightweight material is only set to increase with the recent announcement of a £50 million factory near Sheffield.

Up to now, the automotive division has outsourced production of both the MonoCell and more recent MonoCage to specialists in Austria; by bringing it back to the UK in 2019, it takes full ownership of the process – making it easier to experiment and innovate.

According to its engineers, there is no overstating the strategic importance of the decision as McLaren endeavours to remain at the forefront of a technology that has delivered a tub weighing just 75kg but remains an adolescent in mass-production terms.