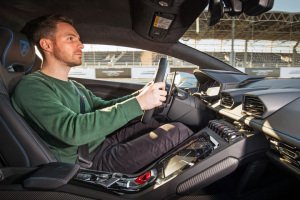 The Lamborghini Huracán Evo is less a mid-life facelift and more a comprehensive re-engineering exercise. It is Lamborghini’s attempt at bridging the gap between the underwhelming original Huracán and the brilliant, but far more expensive, Huracán Performante.

This new model doesn’t have the weight saving measures of the Performante, nor its aerodynamic downforce, but it does have the same uprated V10 engine and a raft of new chassis technologies. Introduced for the first time are rear-wheel steering and torque vectoring, and those new systems – along with the existing dynamic steering, magnetic dampers, stability control and the powertrain – are all integrated into one central brain, called Lamborghini Dinamica Veicolo Integrata (LDVI).

The idea is that the various systems work in harmony, rather than busily doing their own things and achieving not very much. Capable of responding in just 20 milliseconds, LDVI primes every one of the parameters under its control to make the Huracán Evo the most responsive and alert Lamborghini to date. Despite being heavier than the Performante, the Huracán Evo is both more agile, says Lamborghini, and faster around the handling circuit at Nardo. Power is up to 631bhp at 8000rpm and torque rises to 443lb ft at 6500rpm. With four-wheel drive, the Huracán Evo will register 62mph in just 2.9sec and run on to ‘more than’ 202mph.

There are further changes inside, including an 8.4in touchscreen display in the centre console, as well as revised bodywork that improves aerodynamic efficiency. Curiously, there still isn’t a customisable driving mode, which means you cannot separate the firmness of the dampers from the drivetrain setting. That means Corsa mode, the loudest of three, will probably be usable only on race tracks and the smooth roads.

For the time being, we can only say what the car is like to drive on a circuit: the Bahrain grand prix track. The new model is not only faster and more agile than the car it replaces, but more fun to drive, too. The original Huracán could be a frustrating car both on road and track with prescriptive, insistent handling. It would defiantly do what it wanted – which quite often was to understeer – rather than respond willingly to the driver’s inputs. It made the Huracán a far less rewarding supercar than some rivals.

The sweeping chassis revisions and the raft of new technologies have made the Huracán far more enjoyable, with a more resilient front end and a sweeter, more neutral chassis balance. In the Sport driving mode, the car is playful, keen to oversteer under power and supremely easy to control at the limit. In the Corsa mode, the car is agile, responsive and pin-sharp, and it is in this setting that it’s at its fastest.

Lamborghini Dynamic Steering is now the only steering option available, the passive system having been dropped, but it is much improved over the highly dubious dynamic system that preceded it. You now have a clear sense of how much grip there is in reserve across the front axle and you can position the car intuitively and with precision. Crucially, the Huracán Evo uses its suite of technologies to enhance the potency of the driving experience, rather than to deliver some digitised and synthesised approximation of it.

The V10 engine remains one of the most spectacular performance-car power units on sale with a soaring, baleful soundtrack. For track driving, the twin-clutch gearbox is just about without fault.

But at a base price of £206,000, Lamborghini’s entry-level supercar has become notably expensive, now positioned alongside titans such as the Ferrari 488 GTB and McLaren 720S. Against such illustrious opposition, the much-improved Huracán might yet be found wanting.

Initially, the driver’s seat feels as though it’s set quite high within the cabin, but it’s actually the low roofline creating a false impression. DP

LAMBORGHINI HURACAN EVO
Raft of new chassis technologies deliver more reward, while the engine is as spectacular as ever