We’ve waited a long time for the BMW i8 Roadster. It was first previewed as the i8 Concept Spyder in 2012 but finally the plug-in open-top hybrid is on its way to the UK. It’s still decidedly contemporary, though. Even three years after the launch of the i8 Coupé, few cars at any price make such a powerful visual and technical statement as the new open-top BMW.

If anything, the i8’s futuristic lines are further enhanced by the loss of its fixed roof, most notably around the rear, with its two large buttresses. The large fabric roof opens automatically in 15sec at speeds of up to 31mph and stows behind the two-seat cabin between the rear bulkhead and mid/rear-mounted petrol engine.

To accommodate the new soft-top, BMW has modified the windscreen, providing it with a strengthened carbonfibre frame. The rear window, which doubles as a wind deflector, is also altered and can be closed or opened independently of the roof.

In combination with further strengthening measures within the carbonfibre-reinforced plastic and aluminium structure and new frameless scissor-action doors, the car’s weight has risen to 1595kg, 60kg more than the facelifted i8 Coupé. UK deliveries of both new i8 models are due to start shortly.

Inside, the dashboard design has been lightly updated for the i8 Roadster and facelifted i8 Coupé, with the latest iDrive system offering touch control on a free-standing 8.8in monitor and rotary control via a dial on the centre console. There are also new seats, an optional head-up display and a range of new trims.

Key among the changes to the i8’s powertrain is an increase in output from the front-mounted electric motor, which delivers 12bhp more than in the earlier i8 Coupé, at 141bhp, and the same 184lb ft as before through a two-speed gearbox to the front wheels. Combined with an unchanged 228bhp delivered by the turbocharged 1.5-litre three-cylinder petrol engine to the rear wheels via a six-speed auto, this provides an overall 369bhp.

Meanwhile, the energy capacity of the lithium ion battery has risen from 7.1kWh to 11.6kWh. BMW quotes a pure-electric range for the i8 Roadster of 33 miles – 10 more than it claimed for the earlier i8 Coupé.

Around town in eDrive Eco mode, progress is whisper quiet and quite urgent as the upgraded electric motor provides drive exclusively to the front wheels. Combine the electric and petrol motors in Hybrid Drive Sport mode and the new BMW offers brutish four-wheel-drive acceleration off the line and great long-distance touring ability. There is excellent flexibility and, with sufficient revs, a stirring engine note too.

Despite changes to the suspension bushings and a new vertical strut, there remains some road roar on less than smooth surfaces. However, secondary vibrations through the body structure are far better damped than with the original i8 Coupé. 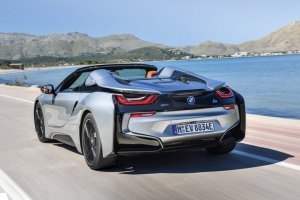 Further improvements have been focused on the steering, which remains quite light by sports car standards, but now has added weight off centre. Overall, it endows the i8 Roadster with a more responsive feel than the older i8 Coupé.

There’s a multifaceted appeal to the i8 Roadster that you don’t find in any obvious open-top rival. You can cover large distances with effortless progress and great economy. It may have been a long wait, but the i8 Roadster does not disappoint. The changes to both the powertrain and chassis not only endow it with sharper performance but also more endearing driving qualities than the earlier i8 Coupé. With the adoption of these changes, the fixed-roof version also promises to take a step up the sports car pecking order.

Instead of the coupé’s ‘+2’ rear seats, there’s 92 litres of oddment storage within three cubbyholes in the rear bulkhead. But the boot shrinks to 88 litres. GK