This is the fastest SUV on the planet, according to Alfa Romeo. But it’s not how fast it goes that really matters, but how it goes fast

Alfa Romeo’s wilderness years seem to be drawing to an end. For far too long, there has been a painful disconnect between the brand’s illustrious heritage and its sub-par showroom models, cars that have failed to live up to Alfa’s reputation as well as to its competition. The first hint of a renaissance was the Giulia saloon. The mainstream models are more than commendable and the ripping, 503bhp Quadrifoglio is a bona fide BMW M3 beater. More recently, Alfa Romeo has confirmed its return to Formula 1 as title sponsor to the (admittedly back-of-the-grid) Sauber team. And now, in the new Stelvio Quadrifoglio, Alfa has delivered the fastest production SUV you can buy.

That’s the claim, anyway (and not unlike the one made recently by Lamborghini about its upcoming Urus). It’s a slightly tricky one to verify because there are so many different ways to interpret that slippery F-word. There are SUVs that better Stelvio’s 3.8sec 0-62mph time, after all, and others that shade its 176mph top speed. In fact, Alfa bases that somewhat bold claim on the Stelvio Quadrifoglio’s eye-opening 7min 51.7sec Nürburgring lap time, which is an SUV record. It wasn’t all that long ago that dedicated sports cars were recording seven-50-something laps around the Nordschleife. No matter how tired you are of seeing such lap times being flung back and forth, ◊ ∆ it cannot be denied that a sub-8minlap around the place is extremely fast for a high-riding 4×4.

Designed and developed by the same team that brought us the class-leading Giulia Quadrifoglio, the high-performance Stelvio is dripping with genuine sports car hardware. The 2.9-litre twin-turbo V6 and eight-speed automatic gearbox are borrowed from the Giulia – with specific calibration and ratios – but here drive is sent to the road by Alfa Romeo’s Q4 four-wheel-drive system. In normal driving, 100% of torque is sent to the rear wheels and only when they begin to slip is drive shunted forwards. Even then, only 50% can be diverted to the front axle, so it’s a very rear-biased four-wheel-drive system.

The rear differential incorporates a pair of clutch packs that split torque between the rear wheels. This active torque vectoring makes the car more nimble, reckons Alfa. The car is suspended by double wishbones at the front and a multi-link set-up at the rear, with adaptive damping.

The engine is mounted mostly behind the front axle line to aid weight distribution, and the use of carbonfibre and aluminium panels keeps weight to a minimum. Even so, at 1830kg, the Stelvio Quadrifoglio is no featherweight.

There are various drive modes, including an Eco mode that reduces fuel consumption by shutting off three cylinders – although this can also happen in Normal mode – and a Dynamic mode that sharpens throttle response, reduces gearshift times, tightens up the dampers and adds weight to the steering. Race mode turns everything up another notch while standing down the stability control system and, notably, it is possible to switch the dampers back into an intermediate setting in Race.

There are several very powerful SUVs on the market that are colossally fast in a straight line and just about composed enough in bends to keep a hold of the tarmac, but there aren’t many that are genuinely entertaining to drive. The Stelvio Quadrifoglio is undoubtedly one of the few.

Inevitably, its high ride height, chunky kerb weight and lofty centre of gravity mean it’s nowhere near as planted or as responsive as the Giulia, but there is a remarkable level of precision and body control here and a usefully neutral cornering balance too. The steering is direct, quick and very intuitive, and the front end finds reasonable turn-in bite. Ultimately, the car will understeer when you really chase it, but there’s enough front-end grip to carry proper sports-car-rivalling pace along a winding road.

The four-wheel-drive system makes light work of transferring all that power and 443lb ft of torque to the road. If you’re really clumsy with the throttle, you’ll make the car slide ever so slightly away from a corner, or understeer if you open it too early in the bend, but with a little care, you can hook all four tyres up perfectly and slingshot the car away from the apex without a hint of waste. There isn’t the on-throttle adjustability or playfulness you get in the rear-driven Giulia but, thanks to the torque-vectoring trickery, you do get very positive drive away from the apex and a level of agility that seems at odds with the raised seating position. The chassis is also poised enough that you can adjust your line slightly mid-corner, whereas many SUVs stick belligerently to a given trajectory the moment you turn into a bend.

On very smooth Emirati roads, where we drove it, the Alfa’s ride was settled and composed, but we’ll have to wait and see how well this car deals with a properly challenging British B-road. The engineers assure us it rides bumps with the same remarkable fluidity as the saloon.

Just as it is in the Giulia, the 2.9-litre V6 is a sharp, responsive and rev-hungry unit that delivers massive straight-line performance. The soundtrack is even quite evocative, which is unusual for a turbocharged unit. The auto ’box, meanwhile, is plenty quick enough – in Race mode it’s almost as snappy as a dual-clutch transmission – and it’s smooth and refined at low speeds too.

Where the Giulia falls short of its competition is within the cabin and the same is true of the Stelvio. Some of the plastics are a touch brittle and the switchgear looks and feels very mainstream rather than premium, but there’s nothing offensive about it. The seating position is very good, though, and the optional carbonfibre-shelled sports seats offer plenty of lateral support.

There is a definite optimism around Alfa Romeo now, a sense that the marque is ready to get back in tune with its glowing heritage. And there’s a certain confidence. Engineering boss Roberto Fedeli says he will not bring a performance car to market unless he’s certain it will be better than every one of its rivals. Fedeli and his team pulled it off with the Giulia Quadrifoglio. The early signs suggest they’ve just done it again.

THIS IS A JOB FOR SUPER-BRAIN 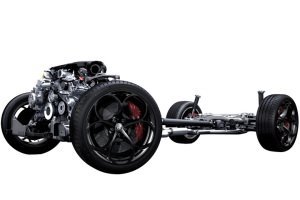 With so many interlinked systems busily working away beneath the skin – including the active four-wheel-drive system, the torque-vectoring rear differential and the adaptive dampers – Alfa Romeo has developed a central super-brain to ensure that all those functions work with one another, rather than against.

Alfa calls it Chassis Domain Control, or CDC. Depending on the selected drive mode, CDC juggles those active systems and the ESP to deliver “the best performance and utmost driving pleasure at all times”. From the driver’s seat, the integration is seamless.

Like the Giulia Quadrifoglio, the range-topping Stelvio has very quick, precise steering. In fact, the 12:1 steering ratio is the most direct in the SUV class, says Alfa. The Stelvio Quadrifoglio also has the best power-to-weight ratio in its category, with 279bhp per tonne – only a few points shy of the 2007 Alfa Romeo 8C Competizione.

Tester’s Note
Standard cast-iron brakes started to fade during a quick run on a mountain road. More durable carbon-ceramics will be available, though. DP