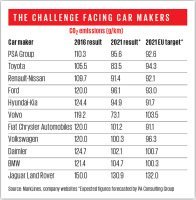 However, according to two auto industry consultants, the combination of new testing legislation, the effects of Dieselgate and the market shift towards SUVs could make it near impossible for car makers to meet the laws. Failing to do so would result in manufacturers facing fines of hundreds of millions of euros.

Under the regulations, each car maker has a CO2 output target, which is averaged over its whole range of cars. So while the targeted average across the whole industry is just 95g/km of CO2, the individual requirement varies, via a complex calculation, depending on the weight and size of vehicles built and how many of them the manufacturer sells each year.

Jaguar Land Rover, for instance, has a fleet CO2 target of 132g/km because it sells fewer than 300,000 vehicles in the EU each year and makes larger-than-average vehicles. Fiat Chrysler Automobiles, by contrast, has a fleet target of 91.1g/km. In reality, the 95g/km average means an average real-world economy of around 78mpg across a car maker’s entire fleet. And that is a huge technological hurdle. If that doesn’t sound difficult enough, the EU has decided to introduce a new, and much more rigorous, way to measure fuel economy. When the original regulations were set back in 2012, the standard EU fuel economy test was the New European Driving Cycle (NEDC). This, however, has since been dropped and replaced by the Worldwide Harmonised Light Vehicle Test Procedure (WLTP).

WLTP is a much more ‘real-world’ test for fuel consumption and tailpipe pollution. Unsurprisingly, auto industry consultancy JATO Dynamics says that the introduction of WLTP for fuel economy calculations alone will be enough to make it “exceptionally difficult” to meet the 2021 95g/km figure.

According to a recent report by JATO, a sample of vehicles re-tested under the new WLTP regime showed that official fuel economy figures increased by anything between 9% and 17% compared with NEDC testing.

One of the first current production cars to be tested under WLTP was the 114bhp Volkswagen Up GTI. According to reports from Germany, the car was rated at 110g/km under the NEDC test but at 127-129g/km by WLTP, a rise of around 16%. If a city car with a moderately powerful petrol engine is that far from the 95g/km target, what hope for larger, more powerful vehicles?

If that wasn’t bad enough for car makers, the last 12 months have brought even worse news: collapsing sales of diesel vehicles. In October 2015, around the time Dieselgate broke, diesel cars accounted for about 52% of the new car market across Europe. In November 2017, that share had slumped to just 42% in western Europe, according
to reports.

But there’s another issue flagged up by JATO that will be a third drag on the efforts to meet the EU laws: the rise of the SUV. In 2016, says JATO, SUVs accounted for 3.8 million sales in Europe, which is a 26% market share. It forecasts these figures will reach six million and 33% by 2020. There’s no doubt that a market shift to taller, bluffer vehicles will further push up average fuel economy.

It claims fines in 2021 (levied at ¤95 per gram over the limit for each vehicle sold) could range from a massive ¤1.36 billion for VW to ¤307 million for Ford and ¤126m for Daimler. Officially, the car makers are telling a very different story. According to the banking analysts at Evercore, senior executives at VW, BMW, Daimler and PSA all say they are confident of meeting the 2021 CO2 targets. While recognising that diesel sales were falling markedly, BMW chief executive Harald Krüger told Evercore that he wanted to see sales of the marque’s electrified vehicles ‘ramped up’ over the next three years.

VW group sales boss Fred Kappler hinted, as did Daimler chief financial officer Bodo Uebber, that the arrival of 48V mild hybrids could yet spring some of the manufacturers from the risk of significant fines. Evercore analysts say 48V systems can improve the economy of a typical compact turbocharged petrol engine by as much as 20% and will be cheaper to manufacture than a modern diesel unit.

While that may yet solve the diesel conundrum by restricting oil-burning engines to the biggest vehicles, Evercore estimates that 48V systems will only account for 10% of new cars sales in Europe by 2021 and sales of electric vehicles across Europe are predicted by many analysts to reach just 4% by 2022.

Despite the confident public face of European car makers, meeting these EU laws by 2021 is clearly going to be an extremely tight squeeze.