It’s on at MAEPS in Serdang until Sunday 14 April and there are lots of exciting cars, motorcycles and accessories to see, also test drives and special deals.

It was just six months ago that we had a motorshow, KLIMS 2018, but if you need proof that the automotive industry never stands still, Malaysia Autoshow 2019 reflects this with new previews, new launches and special Concepts to tantalise car fans.

So, what is there to see? Volkswagen, BMW, Mazda, Honda, Toyota, Peugeot, Citroen, Kia, Perodua, Proton, Mitsubishi, Nissan… all the major automotive brands are in the exhibition halls at the Autoshow. Mercedes-Benz has their stand outdoors, ready for test drives.

Honda is in Hall A and besides the cars, the bikes are also in attendance at the event. Honda Malaysia have on display a Civic Type R Mugen Concept. The  2.0-litre, 310bhp and 400Nm producing Honda Civic Type R is the world’s fastest front-wheel drive production car and this one is dressed up in eye-catching Carnival Red with full Mugen styling consisting of 12 items:

It’s a South-East Asian premiere so be one of the first in the region to see it in real life while it’s in town. The other notable displays at the Honda booth are the Virtual Reality Sensory Experience, a CR-V Mugen Concept and newly launched models, the HR-V RS and HR-V Sport Hybrid i-DCD. Also Jazz Mugen and BR-V Special Editions

Perodua recently announced the launch of the Bezza Limited Edition and there’s one on display at the motorshow to see and feel. Only 50 units are available for booking at the Malaysia Autoshow, priced at RM44,900 on-the-road without insurance.Based on the Bezza 1.3 Premium, the Limited Edition has ivory paintwork with a full GearUp body kit finished in matte black with an all-round red lower pinstripe, a matte black rear spoiler, a blacked-out roof and dark grey alloys. In addition, the sporty exterior has red door mirror covers and geometric graphics on the bonnet and lower sides.

For accessories hunters, GearUp has a huge display so this is the opportunity to pick up some new kit for your Perodua

Proton has the refreshed Iriz and Persona on display. The updates are largely on the exterior but the Iriz also gets some eye-catching new upholstery with a red and blue stripes on the back rest. The two models and the X70 sport Proton’s new cohesive, consistent branding style, the Proton brand letters centred and spaced across the back at driver’s eye level. 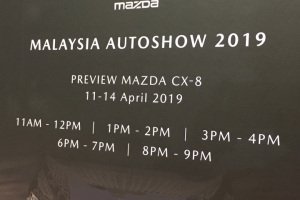 Mazda has the CX-8 SUV on preview. The long wheelbase version of the CX-5 is available in petrol and diesel variants with several seating configurations. The car on display is the diesel which has leather seats in a 2+2+2 configuration with a fixed centre console between the individual second row seats.

The petrol CX-8s will have 2+3+2 fabric seats for the base model with bench seating in the second row; 2+2+2 fabric seats in the mid-spec with space between the individual seats in the second row to walk-through to the third rows. The top-spec, like the diesel, has leather upholstery and the same 2+2+2 seating.  The third row seats in all four variants can be folded down flat to increase boot capacity.

Check out the BMW i3s at the BMW Malaysia stand. The theme of the stand is Visionary Mobility with the i3s electric car, launched on the opening day of the motor show, on display. The carbon fibre-reinforced plastic (CFRP) passenger cell around which the i3s is built is also on display.

The i3 is BMW’s first all-electric vehicle and the i3s is the sports variant which offers more powerful performance. The lithium-ion battery delivers a maximum output of 184bhp, with a peak torque of 270Nm. The i3s takes 6.9 seconds to sprint to 100km/h and is capable of reaching speeds of 160km/h with a range of 260 kilometres. The combined electric power consumption on NEDC cycle is 14.3kWh for every 100km.

Three hours of charging on the BMW i Wallbox at 11kW provides an electric range of 180km.

Toyota UMW is previewing the Yaris, the Vios hatchback sibling.

Outdoors, test drives are available from most of the brands including Mercedes, Nissan and Volkswagen.

Besides Honda, there were other motorcycle brands at the show.

Sunday 14 April is the last day. The show closes at 8 so it’s not too late to go to MAEPS to take a look at what’s on offer at the Malaysia Autoshow 2019.

Proton sales continue to grow as 2019 comes to a close, doubling its sales figures year-on-year thanks to the Saga and X70 models. Proton is ending 2019 on a high note, as the company announced […]

The GLE now gets the 4.0-litre V8 which in the top ‘S’ variant make more than 600 bhp. On top of that, it also gets a 48-volt system and mild-hybrid tech Mercedes-AMG has launched the […]