The Kuala Lumpur International Motor Show is on until 2 December 2018 at MITEC. These are our top picks of what to see, in no particular order 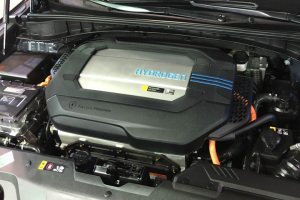 Hyundai has five SUVs are showcased at KLIMS but the most exciting must surely be the hydrogen-fuelled Nexo and the all-electric variant of the compact-sized Kona. The Nexo won’t be available in Malaysia for a while yet but it’s an exciting glimpse into the future of renewable energy. The Nexo was a purpose-designed vehicle, not an adaptation of an existing model. It has a 600+km range and takes just five minutes to refuel – that’s the convenience of petrol or diesel, but with green credentials: the exhaust is water vapour. The charming Kona is also noteworthy for its real-world 500+km electric range, putting it in a class of its own for efficiency. There’s also a petrol version of the Kona on display, due next year, for those who prefer to stick with fossil fuels. Honda has a lot going on at its booth: opportunities to experience its technology hands-on, check out special versions of certain models with Mugen concept bodykits. On show is the Honda Clarity, another air-freshening hydrogen car, built on the Honda Accord platform. Over at the Citroën/DS stand, two standouts were the Citroën C5 Aircross SUV and the DS7 SUV. The 109bhp, 205Nm Aircross with colourful highlights on the body and in the cabin is youthful and bold, living up to Citroën’s maxim of using interior space efficiently with its 1289-litre cargo capacity. On the other side of the coin is the DS7 Crossback, built on the same platform as the Aircross but the luxury version of the compact SUV. Clad in menacing glossy black paintwork with darkened windows and lattice-patterned LED tail lights, it’s sombre and sophisticated. The DS7 Crossback was Emmanuel Macron, the President of France’s transport of choice for his inauguration. Over at the Toyota stand, forget the bread-and-butter Vios and Camry, both of which saw “all-new” models launched. They’re very much re-skins of old things and you will soon be able to catch both of them at any Toyota showroom. The real beauty is the Toyota FT-1 Concept car. The beast accolade could fittingly be bestowed on the Toyota Hybrid formula car for its pure functionality. Next to Toyota is luxury sibling, Lexus. The Lexus LC+ Concept Car was the standout star of the stand although the LC, all-new ES and soon-to-be-launched UX compact SUV were all notable. Perodua also showcased a concept car: a compact-sized vehicle with coach doors, configurable interior, digital instrument clusters and a large digital control panel at the centre console in the style of Tesla, presented in a light and sound show. Plus, three honourable mentions… 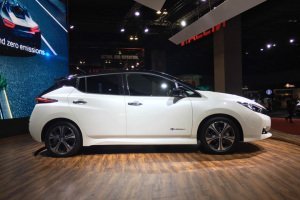 First, the all-new Nissan Leaf, the EV that paved the way for all EVs in Malaysia was on display ahead of its anticipated launch next year, National Automotive Policy-willing. The world’s best-selling highway-capable car, the second generation Leaf is now faster and more powerful with its output of 145bhp and 320Nm of torque. The 2019 Leaf’s range has also doubled to over 400km with the introduction of a new 40kWh battery. New tech in the Leaf includes autonomous parking, autonomous braking, lane departure warning, blind spot warning and road sign detection. 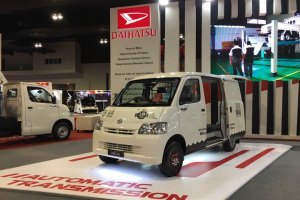 The Daihatsu Gran Max van is adaptable, versatile and customisable. There was a mobile boutique and a food truck,  both based on the Gran Max. Also on display was a hydraulic tipper concept van. The 1495cc light commercial panel van is available as either a five speed manual or a Malaysia first, a four-speed auto. The slush-box vans on our roads before this Daihatsu were grey-market imports. Safety features include ABS and dual front SRS airbags. 3M the multinational chemicals and adhesives manufacturer is has a very eye catching colourful display of its body wraps range. They also do films: solar tints, security films, and paint protective coatings. And finally, because it’s too big to ignore: the longest limo in Malaysia is on display.

If you were counting, there’s more than 10 because there’s a lot more to see at KLIMS than just 10 things.

Lexus Malaysia has launched the fifth generation of their flagship model, the LS 500. Almost everything is new starting with the new platform, the GA-L (Global Architecture – Luxury) last seen in the LC 500 Coupé […]

UMWT temporarily ceases operations and TGR Festival will be cancelled

UMW Toyota Motor has announced that its business operations will be put on pause to comply with the Government’s Movement Control Order, and the Season 3 Round 4 TGR Festival will be cancelled. UMW Toyota […]