Rimac supplies tech for hypercars such as Aston’s Valkyrie, but its own nearly sold out in three weeks 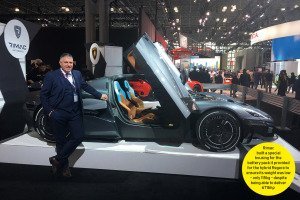 The steady rise in the car industry of Croatian firm Rimac is illustrated not only by some of its clients – Aston Martin and Koenigsegg for starters – but also by its own ambitious hypercar plans.

Its new C_Two electric hypercar has astonishing performance – 0-60mph in 1.85sec, outdoing the already crazy figures of its predecessor, the Concept One – and it’s upping production numbers by 1775%. Only eight Concept Ones were made but there will be 150 C_Twos.

Head of sales Kreso Coric told Autocar the C_Two had almost sold out just weeks after being revealed at the Geneva motor show in March and the remaining few are being held back for some of its 12 dealers worldwide, which are not yet fully established.

Reaction to the £1.5 million car, whose working title of C_Two will be replaced, has “exceeded all expectations”, said Coric. Between 75 and 105 of the 150 cars will go to the US and, on average, options add another £430,000 to the starting price. Favourite extras include clear carbon and customised leather.

Although Rimac is building a name for itself as a hypercar maker in its own right, it is best known as a supplier for niche performance cars, such as the Aston Martin Valkyrie, Koenigsegg Regera and Jaguar’s recent electric E-Type Concept Zero, plus a number of other unnamed, higher-volume manufacturers.

We asked Coric about Rimac’s current success and future plans.

Did you change your 0-60mph target for the C_Two when Tesla revealed its Roadster, which is claimed to achieve 0-60mph in 1.9sec?

“We never meant to go below 2sec. Then the Tesla Roadster came out with these crazy figures, which they never backed up. We don’t like to be compared with Tesla because it’s a completely different category, but it’s a mindset because it’s electric like us.

“Because of all this hype around Tesla, [Rimac CEO] Mate Rimac really challenged our engineers. We wanted to beat that result but we didn’t want to come out with it until we were 120% certain that it was achievable.

Why is it so important to beat major rivals on acceleration?

“We care so much about acceleration because we can prove to ourselves that we can be at the front edge of technology. We can be the first ones that did it. It’s about making technology that will deliver these kind of performances. If the car doesn’t work or isn’t bought, then it’s very difficult to sell technology as a supplier. It’s a showcase. And so it is a big deal for us. It is very important for us that we repeat these tests and simulations. Now it’s a matter of delivering.

“The first mule cars will be finished in the second half of this year and then we’ll make 18 prototypes next year. The start of production will be January 2020, and we’ll build four cars a month in the new factory.”

Why are you tabling level four autonomy for the C_Two?

“We don’t have the V8 sound like our rivals. We have to come up with something else. We cannot fight with the big guys but we had to come up with other features that can make this car fun.

“A lot of car makers keep forgetting about the fun factor, especially with supercars. They made them too complicated now. They are great cars but some take 10 minutes to get into. We wanted to build a car focused on the driver: you jump in the car, press the button and drive.

“For example, the driving coach mode is directly connected to the autonomous driving system, which will help any driver enhance his skills on the track. Even if you are an inexperienced driver and you want to go fast, this system will show you the ideal trajectory, give you audio guidance, but if you are about to lose control, it can also correct errors.

“Level four is a long way off, though. It is a lot of engineering and a lot of challenges. We have a completely new team working on it. Real geeks.”

What will you call the C_Two?

“It’s so difficult, you know. How do you pick a name? I was talking to some industry guys who said: ‘Just get drunk and sit round a table and come up with the name. Then in the morning, it’s done.’ So most likely, we are going to get drunk! No, we hired an agency to come up with a name because we want to build a story. I’m not the happiest with the name as it is.

“The Concept One was called that because it was just a learning project. We never meant to sell it. But the crash [The Grand Tour’s Richard Hammond crashed a Concept One] happened and we got lucky with that. We sold three cars that day. It was the best marketing ever. Of course, it was scary and serious and it could have ended in a different way and we could have ended up needing a new job.”

“We don’t want to be perceived only as an OEM supplier. We want to build our name in the car industry as a serious hypercar manufacturer. Right now, it is very difficult because we are so young. But we will never go into mass production. There will be no more than 500 cars for each model. The framework I see is for between 80 and 200 cars.

“At the moment, 90% of our revenue comes from supplying technology. In future, it might be that two-thirds is supply and a third our own car business.

“Where we see ourselves as a supplier is providing design solutions and hardware. For vehicle control units, we will do gearboxes, motors, batteries. We want to be a manufacturer of tens of thousands of these in future. At the moment, it’s a thousand, but by 2020, we’ll achieve tens of thousands. Until two years ago, we were considered prototypers. We want to be an industry player. We will never compete with Magna or Bosch, but we want to be specialised in this niche.”

What future technologies are you working on for yourself and as a supplier?

“We are mostly focused on batteries and battery management systems. It’s that software that manages the work of the battery. That’s where the difference is. When you will cool down the battery. How you will cool it down. Which cell to start cooling first. Should we cool in segments? It’s a competition of algorithms between us and competitors.

“It’s really crucial, especially with performance cars. We are making sure that owners of the C_Two are electronically limited to 10 drag races per day because otherwise it just puts too much pressure on the batteries.

“The biggest progress is happening in charging times right now. This year, all of our times for up to 80% have been below 20min.”