The XC40 looks like it wants to do things slightly differently from those. Not in its mechanical make-up, necessarily, which is pretty straightforward (more on which in a moment), but at least in its design and ethos. It’s still a Volvo at heart, but whereas other cars are facsimiles of bigger models in their makers’ ranges, the Volvo you should think of as “a cousin, rather than a brother” to XCs 60 and 90.

Not only is it smaller, then, but it’s also a bit chunkier on the outside and a bit funkier on the inside than the more elegant but understated 60 and 90 models, which is a theme you might expect to continue when smaller saloons and estates come on this platform, too. The platform, or architecture, is new. The manufacturer calls it ‘CMA’, or compact modular architecture, and it’s one of two that’ll underpin all Volvos. The 60 and 90 models are on a different one.

Here, it’s pretty conventional for the most part. It’s a steel monocoque, with MacPherson struts at the front and a multi-link arrangement at the rear, electrically assisted steering, and a transverse, front-mounted engine driving either the front or four wheels.

Volvo has been a bit more chilled about how it would like the XC40 to drive, which rather suits it

Initially, all XC40s coming to the UK are four-wheel drive and have automatic gearboxes. You’ll have a choice of a 187bhp 2.0-litre diesel engine (D4) or a 247bhp 2.0-litre turbo petrol (T5). Here, we’ve driven both, you lucky devils. Later on, that range will be expanded, in the fashion of all Volvos, with engines that come in at less than 2.0 litres and with fewer than four cylinders. A three-cylinder petrol engine will be mated to a hybrid system and at, some stage, I think there’ll be a pure-electric version.

After 2019, Volvo says, any newly introduced Volvo won’t have a diesel engine and the cost – with NOx traps and urea solutions and so on – means that hybrids, whose battery costs are decreasing, will be cheaper to make than diesels by then anyway. For now, though, this one’s pretty mechanically straight.

Visually, perhaps it isn’t. It’s wilfully different from (a) the norm and (b) other Volvos, both of which are cool by me. In making it look like a “tough little robot” (apparently), it’s most like, I guess, a Skoda Yeti: happy to be a bit blocky and earnest.

There are neat touches, too. It’s about 25mm wider at the back than the front and there’s a diddy rubber Swedish flag hanging off the side of the bonnet, which is cute.

Likewise inside, there are Volvo themes. There’s the big, horizontal dashboard line, but here intercepted with bolder details, such as sweet upright air vents. Obviously, perceived material quality is lower than in more expensive XCs, but they’ve done what they can to alleviate that. One is make things a bit funkier to look at but, similarly, the interior designers have opted to reduce the number of mouldings, to reduce tooling costs, so that the cost spend on each individual switch can be a bit higher.

Consider the door card, for example: instead of a multitude of moulded plastics, there’s one large one and a lot of carpet, or felt, depending on the trim level. And in some pretty wacky colours. In being unable to afford premium materials everywhere, they’ve been  creative, and I think it has worked rather neatly. Perhaps it doesn’t feel so conventionally ‘premium’ as one of the premium alternatives but, just like Volvo versus the rivals further up the range, it still feels Scandi-cool versus sitting inside a DVD player.

There’s still fine practicality, too. The driving position’s good, the Sensus touchscreen remains (for better or worse, mostly better) and there’s strong rear-seat space and a decent boot, whose floor has built-in bag hooks, revealed if you flip it half upright. All pleasing stuff and, incidentally, the kind of thing that Skoda also does well.

To drive, the XC40 continues Volvo’s recent themes more authentically. There’s no great addition of verve or sparkle just because this is the smallest Volvo. It remains safe and predictable, but far from unpleasant.

The D4 we tried rode on 19in wheels with 235/50 R19 tyres and Volvo’s standard ‘dynamic’ suspension, and the T5 petrol wore the ‘sport dynamic’ set-up, which has firmer dampers, and it came on 245/45 R20 tyres. There are no individual weights specified but the range is 1684kg-1733kg, in which you can assume both of these to be towards the top end.

The petrol is a touch lighter, though, and despite its bigger wheels and more dynamic springs, it’s no worse riding. In both, there’s a little brittleness around town – nothing you’d complain about – and some lateral shimmy over harsh surface imperfections, but it smoothens out as speed rises.

Motorway comfort is good, certainly, and by that time the petrol engine has slinked to inaudible. Its power spread is good and it doesn’t sound unhappy to be spinning at speed, too. The diesel is more audible, more often. It isn’t unpleasant, but even at half throttle at higher speeds, it makes its presence known. I think you’d find its German rivals that
bit quieter, but the gearbox shifts
very cleanly.

On back roads, body lean and roll rate are tolerable. Volvo hasn’t tried to contain things too strongly, but neither has it let roll run free. It’s a pretty good compromise in a car that’s meant to be predictable and safe, pleasing but not sporting. And I think it gets that mix about right.

Which leaves the XC40, to my mind, in a pretty good place. This class isn’t, after all, blessed with super-competitive vehicles in the first place, which has given Volvo an advantage from the off. But whereas some rivals try to retain all of the sporting or dynamic DNA of their saloon or estate sister models, Volvo has been a bit more chilled about how keenly it would like the XC40 to drive, which rather suits it.

In being quite practical inside, quite funky both inside and out, and relaxed in its own skin with space allowed for its suspension to breathe, it has retained plenty of the U in SUV. And I rather like it for that.

A MORE VERSATILE TAKE ON CAR USE 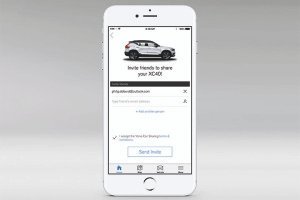 Available for the first time on the XC40 but not, yet, in the UK – although it is coming – is a car-sharing package, so you can let friends and family use your car. You lock your physical key inside the car, where it’s disabled, until somebody else you’ve allowed to drive the car turns up with the right app and permissions, unlocks it and drives the vehicle. Not sure how much demand there is for that at the moment but Volvo, like a lot of manufacturers, senses a change in the wind on car ownership.

Similar is true, then, if you sign up to have an XC40 on a ‘care by Volvo’ car leasing scheme. It’s only available for people from Big London at the moment but lease an XC40 and, for a fortnight a year, you can swap into a different Volvo should you need to.