What will replace the ‘Buckingham Palace on wheels’ approach to building luxury cars in an era of electrification and environmental awareness? Hilton Holloway investigates

The recent spat at the Geneva motor show between Aston Martin and Rolls-Royce was a most un-English outburst. Aston’s unexpected reveal of the electric Lagonda super-luxury concept was accompanied by a direct denunciation of Rolls-Royce’s future as the ‘pinnacle of luxury’ by the brand’s chief creative officer, Marek Reichman.

Reichman described Rolls-Royce as “the most luxurious car in the world” but then qualified that by suggesting its time was running out. “Given its roots, its reason for being, it’s essentially still an internal combustion engine to replace a
horse, a carriage and a trunk. It’s an imperfect package for luxury,” he said.

“Rolls-Royce and Bentley are Ancient Greece today. I worked on the original Phantom. The brief was ‘Buckingham Palace on wheels’. It was important to do that to establish it. But the world has changed, and the royals have changed.”

Reichman also predicted that “the [automotive] world will be more extreme, and customers expect it. You can’t see Apple or Google executives in a Phantom. You can see them in this [a Lagonda].”

It’s exceptionally rare for one car maker to so directly attack another, especially in a way that suggests Rolls-Royce – as currently configured – does not have bright future ahead of it. Reichman’s punchiness might have hit even harder at Rolls-Royce because he was on the original Phantom design team, which was billeted in a disused bank overlooking Hyde Park Corner.

On the face of it, Aston’s decision to declare its intention to enter the ultra-luxury segment with a new brand while taking a big swing at the established market leader seems to be a storm in a very small teacup.

So why, when the ultra-luxury market is so small, should there be such a row? The short answer is that Aston hopes – and Rolls-Royce is well aware – that a once-in-a-generation shift in taste could be on the horizon. For the world’s multimillionaires and billionaires, the established ideas of what constitutes ultra-luxury might be about to change.

Traditional interiors could be a difficult sell in the near future

To be fair to Rolls-Royce, it has already shown its vision of the future. The 2016 103EX was the brand’s first ‘visionary’ concept car. While it was more extreme than the Lagonda concept, the 103EX very much played a similar tune: all-electric drive, full autonomy and an interior made from unusual materials and described as ‘grand sanctuary’.

What Aston is doing with the Lagonda concept, according to researchers and analysts working in the global luxury sector, is known as ‘luxury hacking’. According to a Future of Luxury report by the Economist Intelligence Unit, hacking is “about understanding what a product really is and providing a new and different, more convenient and exciting approach”.

It continues: “Luxury brands have an extraordinary growth potential if they disrupt their own business model and come up with services that create unexpected experiences for their guests. The opportunities are almost limitless. And if the incumbents don’t reinvent their business models, outsiders will do so instead.”

Take electrification. Rolls-Royce built an EV version of the Phantom in 2012 and sent it on a world tour. The project was dropped, according to industry rumours, because the company did not receive any serious orders, even from super-luxury hotel fleets. The company may build an EV version of the new Phantom, but it appears to be reluctant to push the market into something that is not being demanded. The Lagonda project, on the other hand, is a bespoke EV platform, which obviously opens up the opportunity to build a car with a very different interior package.

According to the analysts, there are plenty of other trends that could play towards Aston’s bet on an ultra-luxury EV. Eighteen months ago, consultancy Trendwatching released a report on what it thought would steer consumer luxury in 2017 and beyond. It claimed that status “used to be physical and is now intangible”, adding: “Status has become less about ‘what I have’ and much more about ‘who I am’ – namely, more ethical, creative, connected, tasteful.”

‘Self-actualisation’ is the theory behind a huge shift in luxury consumption patterns, where experiences and products ‘supercharge’ a person’s ability to improve themselves and their overall well-being. Trendwatching says this move is reflected in everything from new types of exercise to ever more exotic types of drink. 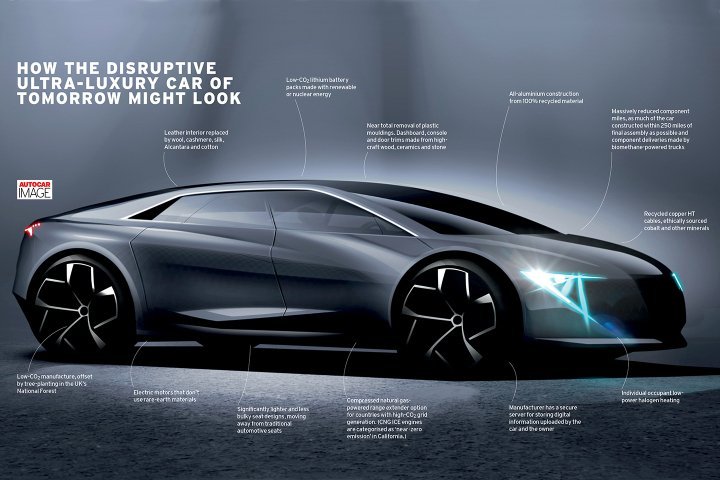 Another big shift – and one especially relevant to the automotive industry – is that the future of ultra-luxury has to be guilt-free, say Trendwatching analysts: “Millions of affluent consumers feel trapped in a guilt spiral when it comes to the negative impacts – on the environment, society and their health – of their consumption. The real luxury for these consumers? Indulgence without the guilt.”

‘On-demand extravagance’ is another significant shift, something that can be seen even in the rise and rise of Uber taxis and food delivery. The final, perhaps most significant claim, is that traditional demographic theory is over, opening the way for ‘old luxury’
to be swept away.

“The old demographic model – which sought to predict consumer behaviours based on age, gender, location, income bracket and more – is losing its power,” says Trendwatching. “Instead, consumers are freer than ever to construct lifestyles and attitudes of their own choosing. That’s thanks to unlimited access to information, the erosion of old social conventions, endless choice and more.”

For example, a social media backlash against farmed leather could make traditional interiors a difficult sell in the near future. It’s just such a risk that pushed Land Rover into developing a premium fabric interior for the Range Rover Velar. Clearly, there’s enough trend theory in that one report to support Aston’s bet on launching a futuristic Lagonda EV. But there’s another intriguing shift that could affect the ultra-luxury market.

Marie-Cécile Cervellon, a marketing professor at the French EDHEC Business School, told consultancy Canvas8 that “vintage and second-hand luxury is still a huge trend” in the fashion world.

This is well-established in the automotive industry with the classic car boom and the move for car manufacturers to offer factory restoration services for their own historic vehicles.

But what if more mainstream luxury EVs were deemed refined enough to provide transport for ultra-luxury consumers and more smart money starts to flow into prestige classics and even classics that are re-engineered for modern life, such as the Mercedes SLs built by Brabus and Hemmels?

As Bentley’s chief designer Stefan Sielaff told Autocar, the new sociological trend is of people being – and acting – ‘forever young’. Such people would rather have a bespoke classic plaything, perhaps, than invest £250,000 or more in a traditional super-luxury new vehicle.

Clearly, the Lagonda concept proposal fits all of these potential trends like a glove. Reichman even claimed at the Geneva show that “Lagonda has always been a disruptor. It has a massive heritage of going toe to toe with Rolls-Royce and Bentley. It has always offered a different shape and form.”

Aston, however, remains a minnow, and it has plenty on its plate. But the noisy arrival of the Lagonda is a bet on disruption in the ultra-luxury market, taking the Tesla formula and moving it forward significantly.

The list of disruptive possibilities is long. A new generation of ultra-high-net-worth people who are younger in outlook and influenced by their millennial children and grandchildren, a shift against leather and petrol-chemical-based plastics allied to a greater interest in sustainable natural materials and a much-reduced energy footprint in the construction of the vehicle.

Ultra-luxury with a much lighter environmental impact and even a desire for a more radical interior architecture is a distinct possibility. But it’s a hell of bet for a company the size of Aston Martin. A

ROLLS-ROYCE: THE FUTURE IS CUSTOM, NOT DISRUPTION

“After some years in this business, and after talking to many, many customers, I know how fundamentally important it is today to have something very different from the ordinary,” says Rolls-Royce CEO Torsten Müller-Ötvös.

“It’s not about bling, or price positioning. It’s about our cars being very special, including under the skin. There is no other way for us than to take a different route from the rest.

“One huge advantage of our new, highly flexible production system is that bespoke cars can be completed on the line. We don’t have to build a car to take it apart again. This helps quality enormously, and makes the process far more efficient.

“We have 100 people working only on bespoke and 90% of our cars have special equipment. Owners participate in the bespoke process: it’s like creating a piece of art – and they can be part of it.

“Bespoke is now so big and valuable to our business, I’d almost say Rolls-Royce could not survive without it.”