Renault has ensured that its first autonomous car has a sporty, dynamic driving feel after an initial reluctance among staff to develop self-driving technology, according to advanced design boss Patrick Lecharpy.

The company has developed a working prototype version of the Symbioz concept car that was displayed at last year’s Frankfurt motor show. Although the concept version was designed to highlight the electric, connected and autonomous technology the firm aspires to provide by 2030, the demo car is a ‘laboratory’ to showcase tech that Renault will offer by 2023.

The Symbioz demo car is powered by two electric motors on the rear axle. Each drives one wheel and they combine to produce up to 670bhp and 487lb ft, giving the car a 0-62mph time of around six seconds.

The Symbioz has been designed to offer Level 4 automony – defined as fully ‘hands-off’ – but also has a non-autonomous Dynamic mode to sharpen responses and handling.

Lecharpy said: “It was difficult within Renault to make people want to develop autonomous cars because they love driving. So we wanted to make Symbioz dynamic. That performance is directly linked to the EV technology, to the power of the two motors.”

The Symbioz concept features an augmented reality head-up display that shows information gathered from the car’s sensors to aid drivers.

Lecharpy said: “The AI [artificial intelligence] can allow you to have a more involved drive. You can trust the vehicle more. Even if you like driving, there are situations when you’d prefer to be driven. You have the choice between a really enjoyable dynamic mode or being driven like a king.”

The Symbioz demo car is a similar size to the Audi A4 and built on a bespoke platform. It is 4920mm long, with the 72kWh battery located under the floor. To boost interior space, the heating system is sited at the front of the car and the audio system has been removed from the dashboard and doors. Instead, Devialet developed special speakers that sit at the front and back of the car and in the B-pillars.

The dashboard is dominated by three 12.0in LG OLED panels arranged in an ‘L’ shape. Two touchscreens, with a bespoke smartphone-style interface developed by LG, can also be run via a mirror app on a phone.

The demo car features four seats and the driver’s seat is able to move away from the dashboard in a relaxed ‘zero gravity’ position when autonomous mode is engaged. The car also features a
virtual reality headset, with software developed by Ubisoft (see separate story, above).

The Level 4 autonomy system uses an array of sensors and cameras on the car, along with data provided by French highway company Sanef from five antennae installed on the 31-mile test route. This data is matched with TomTom HD mapping information to place the car and warn of upcoming obstacles. Renault’s early autonomous offerings will offer Level 4 capability only on roads where similar equipment is in place.

There are no plans for the Symbioz to go into production but, under Groupe Renault’s ‘Drive the Future’ programme, the Renault-Nissan-Mitsubishi Alliance will offer eight electric and 12 electrified models by 2022, along with 15 cars with autonomous systems between Level 2 and Level 4. 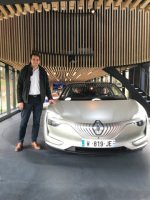 What have you learned from the Symbioz programme so far?
“It’s the first time we’ve worked with designers to integrate so many sensors within a car. Sometimes, hiding the sensors can impact their performance.”

Is it hard to persuade people to accept autonomous vehicles?
“I understand people are sceptical. You’ve been driving cars for years. Now we’re asking you to take your hands off the wheel. I’m a sceptic. But it’s not about now, but the future. The next generation will be much more accepting.”

Will the Symbioz ever make production?
“That was not part of the brief in the beginning. This is a rolling laboratory. But it was an opportunity for designers to work on a new shape: it’s not an SUV! It’s long, but not high, so it seems small outside but is very spacious.” 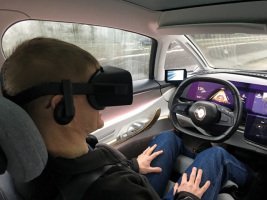 WE (DON’T) DRIVE THE SYMBIOZ

One moment I’m driving down a French highway. The next I’m in the middle of an ultra-modern city, cars around me turning into nothing but red blurs. And then I’m flying, looking down on a vast forest beneath me.

Have I been smoking something? No, just trying the virtual reality (VR) experience that Ubisoft has developed to help pass the time while the Renault Symbioz prototype is driving itself. The software matches its momentum to data gathered from the car, ensuring that you truly feel immersed. Which makes it quite glaring when the programme ends and you remove the headset to find yourself confronted by the reality of a French highway during heavy December rain.

That I was prepared to strap a VR headset while sat behind the wheel of the Symbioz was a sign of my trust in the car – and, to be fair, of the engineer sat next to me with emergency override controls.

In autonomous mode, the Symbioz handled itself well, changing lanes with confidence and only occasionally showing hesitancy due to the action of other road users.

It wasn’t bad to drive, either. Yes, you could feel its 2200kg weight and the crudeness you’d expect of a prototype, but the electric motors offered decent acceleration and the steering was confident. JA