Polestar, Volvo’s new electric performance car brand, is sending its first production vehicle, the £120,000 Polestar 1 hybrid coupé, on a brand-building world tour. The tour will begin at next month’s Geneva motor show and reach a climax at the Polestar 1’s own public launch in the middle of 2019. Sales of the model, which will be made only in left-hand drive, will begin soon afterwards.

According to newly appointed Polestar CEO Thomas Ingenlath, who also continues as Volvo’s design director, Polestar will become Volvo’s “technological spearhead”. After the hybrid Polestar 1 hits the market, Polestar will only make pure electric performance cars. The marque is also preparing for a 2020 launch of the Polestar 2 crossover saloon that bears a very close relationship to Ingenlath’s Concept 40.2. After that will come the full-size
Polestar 3 SUV.

The Polestar 1 coupé, which has an all-carbonfibre body based on a shortened S90 platform and just under 600bhp available from a front-mounted 2.0-litre turbo engine plus twin electric motors on the rear axle, is very much a halo car. In Geneva, the car will be shown to a group of more than 100 potential customers who will then be invited to confirm their interest by forking out a deposit of €2200 (about £1940). The car will make more European appearances – possibly including a driving debut at this year’s Goodwood Festival of Speed – before heading to the US and then China. A special manufacturing plant capable of handling carbonfibre structures is already under construction close to Volvo’s existing plant at Chengdu.

Polestar 2, an all-steel hatchback saloon that shares Volvo’s smaller CMA (Compact Modular Architecture) platform and uses the exterior design of the well-received Concept 40.2 show car, will go into production late next year for sale in the early months of 2020. It will be made in both left- and right-hand drive. It is likely to be built in China alongside the Polestar 1. The company is understood still
to be deciding the details of
its powertrain design, though two electric motors (one front, one rear) are suggested. The car should cost “from €35,000” (about £30,900). R&D boss Henrik Green has previously told Autocar that Volvo is aiming for a driving range of about 310 miles from its electric cars.

Polestar 3, a radically styled, low-roofed SUV that will use the next generation of Volvo’s SPA big-car platform and have a mixed aluminium and steel body construction, is understood to be heading for a 2022 launch, and is likely to be made in China at Chengdu.

When all three models are selling as anticipated, Polestar volume could reach 80,000 to 90,000 cars annually (with Polestar 1 accounting for 500 and Polestar 2 around 50,000). Ingenlath says further models are considered in areas that wouldn’t be mainstream enough to suit Volvo.

As well as working flat out on its rule-breaking new models, Polestar is proposing a unique marketing set-up aimed at increasing convenience for owners and moving beyond the traditionally adversarial customer-dealer relationship. Cars will be paid for by a single monthly subscription that includes insurance, servicing and possibly hire of an alternative vehicle (a service already offered with Volvo’s XC40). Cars will be picked up from customers’ homes or workplaces and delivered back after servicing. Polestar commercial director Jon Goodman expects to open about 80 Polestar ‘spaces’ around the world, with around eight of them in the UK.
STEVE CROPLEY

Volvo’s bold Polestar project may look exciting, but it also has a powerful overlay of good old Scandiwegian practicality. As Polestar boss and Volvo design director Thomas Ingenlath points out, the mother company has a unique combination of strong positioning, corporate strength and manufacturing prowess that should allow it to launch a range of exciting but sensible electric performance cars. And if it’s going to do such a thing, the time is most definitely now.

The first two models – the previously launched Polestar 1 coupé and the Polestar 2 saloon now revealed as using the acclaimed design of the Concept 40.2 – already look like a small family. To make things better, they’re also quite different from other cars on offer, notably the Americans and Germans.

Ingenlath is too polite to say so, but it’s clear he’s gagging to put one of his new Polestars in the ring with Tesla’s much-ballyhooed, much-troubled Model 3 to see which is best. Given the excellence and technical grip of his creative team, there seems a strong possibility he could pull off a victory. 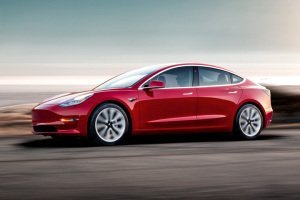 Polestar 2 will hit the market in 2020 in a maelstrom of electric activity from rivals such as Mercedes and Volkswagen and, of course, Elon Musk’s Tesla Model 3 (pictured). Well aware of Volvo’s traditional popularity in the US, Polestar CEO Thomas Ingenlath stresses his car’s strength as a rival for Tesla’s entry-level model, and admits he’s keen to see how the two cars fare against each other. The dimensions are similar: the Polestar 2 is 4.6m long and the Model 3 is 9cm longer. The pair are likely to offer very similar battery ranges too, between 220 miles and 310 miles. What is more, the prices of both cars should start in the mid-£30,000s. Of the Concept 40.02, Ingenlath said: “If we hadn’t made this a Polestar, we wouldn’t have been able to use it at all. The proportions are a bit too extreme for a Volvo. I’m proud it has a happy home.”