For more than 60 years, Matchbox models have been popular with kids and grown-up collectors alike. Graham Heeps discovers the secrets of the scaled-down cars 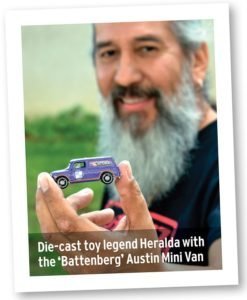 Albuquerque, New Mexico, is the location for the cult television series Breaking Bad and the home of the Indy-winning Unser family. For fans of Matchbox toy cars, it’s also a place of annual pilgrimage for the Gathering, a collectors’ convention that takes place each July.

Hundreds come from around the world to buy, sell and trade their models, meet the Matchbox car designers and generally geek-out on all things toy car.

Abe Lugo, Matchbox’s 38-year-old lead project designer, was on hand in Albuquerque last month to reveal new models coming in 2018. Lugo says that creating a new Matchbox model begins at least 18 months before its eventual release (the 2019 range is currently being planned). Each 125-model range contains around 100 new colour schemes or ‘decos’, of which about 25 are for all-new models that will require tooling development.

In the Matchbox design office at the LA headquarters of parent company Mattel is a picture wall of cars, trucks and other vehicles that serve as inspiration for new additions to the tooling library.

“The list is in three parts: the designers’ personal favourites; a ‘cool and interesting’ board; and common vehicles that you’ll see on the road every day,” Lugo explains. “We have segments within the Matchbox line such as Explorers or Construction, plus certain types of vehicles that are always in the range, like Japanese and European cars, or a ‘lifted’ pick-up truck [one with raised suspension]. We populate those categories with different ideas from our board and try to find instances where one vehicle will hit three or four common points of interest.”

When the new range is complete on paper, work begins on the all-new models. Source material and data for digital designs might come direct from the licensing manufacturer, from model kits and photos, or from similar, previous designs.

Matchbox cars are nominally 1:64 scale, but the size of existing similar models, cost and packaging restrictions, ease of production and standard wheel and axle sizes all impact upon the final proportions and scale of the car.

“For some of the older tools we’re bringing back, we’ve had to reduce the size slightly because we don’t make the bigger-sized wheels anymore,” says Lugo. “The ’33 Ford Coupe street rod from the 1990s, for example, was a cool casting, but is much bigger than comparable designs today. I love hot rods and was fortunate to be able to re-sculpt and update it into a hot rod.”

The digital design is honed to around 80% of the finished article by Lugo and his colleagues before the first 3D-printed prototype is produced. The team works closely with toolmakers in Malaysia and engineers at the factory in Thailand to bring the design into production. There are several early prototype review stages – both 3D-printed and cast, painted and unpainted – before the fully decorated FEP (first engineering pilot) arrives on Lugo’s desk around three months before the start of production. A final, packaged pre-production model shows up about six weeks later.

As Matchbox seeks to return to its roots in the coming years – the words “heritage” and “authenticity” featured heavily in the 2018 preview – kids of all ages can expect more licensed, realistic vehicle choices than of late. That approach was a sales success a decade ago and narrower, more scale-correct wheel options are being considered for the future that could make the models even more accurate.

Inextricably linked with that mid-2000s ‘golden era’ was Michael Heralda. A former graphic designer for both Matchbox and Hot Wheels, Heralda is a legend in die-cast toy circles, with more than 5000 designs to his name. The 66-year-old retired a few years ago but still pens Matchbox decos on a consultancy basis.

A combination of Photoshop and Illustrator software is used to create the decos. Each vehicle is digitally broken down into its component parts – bonnet, doors, roof and so on – to make it easy to tweak individual elements of the design.

“We’re designing for the mass market, which in the case of both Matchbox and Hot Wheels means younger kids,” says Heralda. “That typically means bright colours, fun decorations and realistic features. The challenge is combining that with something that’s sophisticated enough to hold the attention of an adult collector, too.”

One trick is to hide codes, jokes and other references – for Heralda, this means his personal ‘Adlar58’ signature – within the design.

He describes the research phase as the most fulfilling part of the artistic process. Taking into consideration the tastes, types of vehicles and decorations familiar to consumers in different countries can result in liveries like the ‘Battenberg’ Matchbox Austin Mini Van, which features “the most British cake I could find” on its chequered roof.

“The best designs result when all the elements work together,” says Heralda. “It’s the combination of the colour palette, the decoration, the proportions of the deco to the model, and what it says about the car and the series to which it belongs. That’s when I really love the car.” L