Hybrid SUV ploughs its own furrow in a bid to tempt buyers away from the Volvo XC40, Jaguar E-Pace, BMW X1 and Audi Q3

There is a very good reason why Audi, BMW, Jaguar, Volvo and plenty more besides have hurried to introduce compact SUVs in recent years: no other premium market segment is growing at a faster rate across Europe just now. Lexus wasn’t about to sit back and watch its rivals grab fistfuls of market share, which is why its line-up of SUVs is now three-strong, rather than two. The new UX slots in beneath the mid-sized NX, which itself sits one rung below the flagship RX.

Lexus reckons something like 80% of UX buyers in Britain won’t have owned one of the brand’s cars before, which means this distinctive crossover serves a dual purpose: earn revenue in the short term and bring new lifelong customers into the fold beyond that. The company’s marketeers have aimed it directly at 30-something city dwellers, a group that it refers to as “creative urban explorers”, but it accepts that a significant number of buyers will also be older couples downsizing from full-sized SUVs. Whoever the UX is aimed at, the car it must prove itself against is the Volvo XC40, our current favourite compact SUV.

The UX is clearly the most car-like of all the XC40’s challengers, for it is a mere 68mm taller than a Volkswagen Golf but some 129mm lower set than a Jaguar E-Pace. With a very low-slung seating position within that fairly squat body, the UX even feels more hatchback than it does SUV. Those buyers who are looking for a lofty seating position and a commanding view of the road will be well advised to continue their search elsewhere.

The pay-off, of course, is that the UX doesn’t have the teetering centre of gravity of a more conventional compact SUV, which means it should handle with the poise and agility of a hatchback. With that same goal in mind, Lexus’s engineers worked especially hard to make the car’s structure as rigid as it could be – which also improves refinement and safety – while the use of composites for the bootlid and aluminium for the door skins helps to keep weight down. At 1620kg, the two-wheel-drive hybrid UX isn’t as hopelessly overweight as it might be.

What Lexus calls a “brave design” others might describe as overwrought – there are sharp angles and creases wherever you look – but it all seems to be part of a wider effort to make the UX stand out from the countless other small premium SUVs. Even its drivetrain is somewhat unusual (see separate story, above right), at a time when most other car makers seem to be converging on more or less the same powertrain technologies. Lexus might well be following the herd with the UX, but it will not be caught dead copying its rivals wholesale.

Officially, only the petrol-hybrid model – which isn’t a plug-in – will be sold in the UK for the time being, although if there does happen to be a buyer out there who wants the petrol-only version, Lexus will deliver. It expects the vast majority of UK buyers to opt for the front-wheel-drive model, although the four-wheel-drive version, which uses an additional electric motor to drive its rear axle, will also be available.

In typical Lexus fashion, the UX’s cabin is a festival of creases and folds and angular forms, with more different materials and grades of plastic than you could count in a lifetime. It all seems to be built with the integrity and solidity we have come to expect of the marque, though, and the switchgear feels first-rate. What of the rattles and squeaks from the dashboards of both cars we drove? Given that the test cars on the launch were pre-production examples, we’re prepared to overlook those shortcomings for now. Rest assured, if full-production cars rattle and squeak in the same way, we will not be so forgiving.

The company’s wilful attempt to stand out from the crowd reaches as far as the UX’s infotainment control device, which isn’t a conventional touchscreen or a rotary dial but a small haptic trackpad close to the gearlever. As you clumsily jab a finger at the trackpad and watch the cursor on the infotainment screen dart around apparently of its own accord, you’ll think it completely unfathomable, but within a few minutes, it begins to make sense and eventually you’ll wonder why you ever doubted it.

And the driving experience? There’s very little to doubt about the way this car finds its way down a road. Sitting on 18in wheels and optional adaptive dampers – Adaptive Variable Suspension in Lexus speak – this top-of-the-line F Sport model rides with composure and maturity. Its steering is a little vague and oddly elasticated around the straight-ahead, but with some lock on, it becomes crisp and accurate. On the open road, the UX combines its precise steering with good body control and resilient grip to feel quite keen in corners. It doesn’t flop around in the way a taller SUV might, but nor is it particularly fun.

The stuff it doesn’t do so well could be outlined in a tweet. The brake pedal, for one thing, has as many steps through its travel as the car’s cockpit has materials. That’ll be the hybrid system juggling regenerative braking with conventional retardation. Tyre roar at motorway speed is quite pronounced, although the very hard-wearing Swedish roads on the test route are known for that.

The UX’s powertrain might be an unusual one, but it’s by no means bad. In fact, there’s plenty to like about it. Under hard acceleration, the peaky, naturally aspirated petrol engine does sound rather strained, paired as it is with a CVT-style transmission, but the hybrid system means the car is reasonably accelerative in a straight line. With no cogs to swap through, the powertrain is otherwise very refined, and at low speeds, you can slip along in near-silent EV mode for short distances without troubling the engine at all. The gearbox doesn’t suffer from that distinctive and irritating stringiness that has given CVTs such a bad name, although the manual gearshift mode is pretty hopeless. Lexus claims 65.7mpg for the hybrid UX, and over the course of the test, we managed a reasonable 52mpg in mixed driving.

Pricing will not be announced until the Paris motor show in a couple of weeks, so for now we have only a vague steer. The entry-level model might yet sneak under £30,000, but this hybrid F Sport version will cost about £5000 more. There could well be a very fine four-star car in the UX, but until we know for sure that production car cabins do not rattle and squeak the way the launch cars’ cockpits did and that it is priced keenly against its very capable rivals, the UX is not quite there just yet. Rest assured, it is worthy of your consideration at the very least. If we handed out star ratings based on individuality alone, this quirky-looking Lexus would surely be deserving of the full five

LEXUS TREADS ITS OWN PATH AGAIN
Not for Lexus a run-of-the-mill downsized turbo engine with an automatic gearbox. Instead, the UX uses a naturally aspirated four-cylinder petrol engine, complete with intelligent variable valve timing. The compression ratio is a very high 14:1 and Lexus claims an impressive 41% thermal efficiency. On hybrid models, a pair of motor generators either augments the petrol engine to drive the car forwards or harvests energy under braking to recharge the batteries. 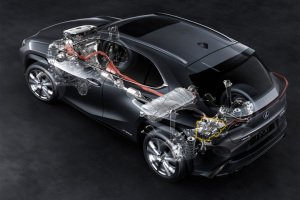 The gearbox is an electronic continuously variable transmission (CVT). The advantage of using this sort of gearbox over a dual-clutch or a torque-converter automatic, says Lexus, is improved refinement and fuel economy.

There is a four-wheel-drive version of the UX, too, badged E-Four. Unconventionally, the rear axle is driven by a third electric motor rather than the combustion engine, and that motor can operate at medium and low speeds only.

The drive mode and traction control switches are rotary knobs that sprout out from the instrument binnacle and look like small horns. DP