These four-door, four-seater super-GTs from Porsche and Mercedes-AMG set a rocking beat for all-round brilliance. Andrew Frankel drives them

The pitch is simple: these are the cars that do everything, the Gary Sobers, Kapil Devs and Freddie Flintoffs of the automotive world. Go extraordinarily fast? It’s a given. Make you appear suitably plutocratic wherever you turn up? Natch. Keep you endlessly entertained on any empty road? Just look at them. Carry you, your family and your luggage in hushed comfort and true luxury any damn place you want to go? I’m surprised you had to ask.

But a pitch is one thing, reality quite another. We can see why you might think (and their creators suggest) that if any car can come close to being all things to all people, a Porsche Panamera or Mercedes-AMG GT 4-Door might fit the bill better than any other. But the question here is not just to decide which gets closest, but whether either – or indeed any car –  can be truly satisfactory in such disparate regards. Trying to be all things to all owners is the brief from hell, and as sure a recipe as exists for ending up with egg on you face.

Press fleet availability means the Porsche and Mercedes seen here are close but not direct rivals, although today this actually helps because it allows us to answer another question, of which more in a minute.

The Mercedes inspires more confidence, and in cars this vast and heavy, confidence is crucial

One thing both cars absolutely share besides their monstrously powerful twin-turbo V8 engines is stupidly long names. The Porsche is a Panamera Turbo S E-Hybrid Sport Turismo, the Benz an even more befuddling Mercedes-AMG GT 63 4MATIC+ 4-Door Coupé. But there are clues in these titles: the Porsche is the full-fat Panamera in both the literal and figurative senses of the word – ‘Hybrid’ signifying a 671bhp, electrically boosted power output and a staggering kerb weight of 2400kg, exactly 300kg more than the same car without the hybrid system.

That 2100kg, incidentally, is the same weight claimed for the AMG. An ‘S’ model not being available, this poor thing has to slum it with merely 577bhp, not the 631bhp that would otherwise have been at our disposal. Yet even in such denuded form, it ◊ ∆ still posts a fractionally quicker 0-62mph time and a marginally higher top speed than the Porsche, as if such issues really matter. Any car weighing more than two tonnes that will nevertheless hit 62mph in three and a half seconds or less really is astoundingly fast.

Before options, Porsche will charge you £139,297 for the Panamera, over £20,000 more than it wants for the non-hybridised version of the same car, which is a scant 0.3sec slower than the hybrid’s 3.5sec to 62mph. So you’re really going to want what the hybrid brings that the regular Turbo doesn’t, including through-the-floor CO2 figures with associated tax breaks, a claimed 31 miles of all-electric running (nearer to 20 in normal use) and possible congestion charge exemptions and so on.

The Benz is less expensive at £121,350, although if you wanted to go the whole hog and get the 631bhp S, with its active engine mounts, rear electronic differential and assorted luxury additions, that knocks the price up to £135,550 and the 0-62mph time down by 0.2sec to a McLaren F1-matching 3.2sec. Finally, both cars are available with a choice of two or three rear seats.

We start in the Panamera. You sit snug and low in a superb driving position which tells you that, for all its heft and gadgets, Porsche still wants you to think of this as a sports car. TFT screens bound the horizons, bewildering you with the information assault they mount. There’s some learning to do here, but once done it’s surprisingly intuitive, even if it still takes twice the time to perform certain simple tasks than it would with buttons and switches.

If anything, the AMG is more sumptuous still. Its interior is more stylised (your eyes are drawn to those gorgeous turbine air vents), although its feel is more applied than designed in, as the Porsche’s is. You sit a little higher in seats that are a little firmer. Here, too, are endless expanses of screens, which are more attractive to me than those in the Porsche and more configurable but less easy to use, especially via a control pad rather than a wheel. The amount of available information is huge, surely more than any owner could need or want. If you ever wish to reconnect with your inner Luddite, there is no shortage of opportunity in either car.

In the back there is no contest: the Porsche is just better. Indeed, having a BMW M5 along for the ride allowed the Panamera to show there is little or nothing to lose in either leg or headroom to a large executive saloon. Four six-footers would be happy to travel unlimited distances in here. The Mercedes is not cramped in the back, indeed its rear quarters are probably more in line with what you might expect from a car calling itself a four-door coupé, but there’s a little less room everywhere and if the person in the front seat has his or her seat as low as possible, it will be hard to slide your feet underneath. The cars’ respective shapes suggest the Porsche would have the bigger boot, too, and it does, although by less than I had expected: 520 litres versus 460 for the Merc.

The drive over to the mountain road in the Porsche is informative. It rides well and, as importantly, like a Porsche: firm but never harsh. Out here, running with the traffic on all manner of roads save urban, it’s doubtful the hybrid is doing anything for the fuel consumption. I reckon it would be an unusually careful long-distance driver who got a genuine 25mpg from it. The lighter, less powerful Mercedes would do better, but not by much.

And then we’re at our desired location, into Sport Plus mode and away. As we all know, weight is the enemy of all automotive engineering but there is a still a sense of occasion and a certain undeniable majesty to see how the powertrain picks up two and half tonnes of Panamera and Frankel combined, and flings us forward. First time out, I defy you not to laugh. There’s so much torque everywhere that the eight-speed dual-clutch transmission seems almost redundant.

Yet everywhere you go, that mass goes too, and you are aware of it all the time. It numbs the steering in corners and challenges the dampers over crests. Grip is provided by four stupendously large contact patches, but this is not a car for chucking or even gently lobbing into corners. It needs to be guided, managed on a slow in, fast out basis, which makes it sound like a 911. But it’s not: on that road there were times it felt a little cumbersome and heavily reliant on its dustbin-lid brakes, whose incredible stopping power was in no way matched by its poor pedal feel.

What, then, to expect of the Mercedes? Given how AMG has laboured to find the handling sweet spot in the more comfortable versions of its far lighter, more sporting and bespoke two-seat GT Coupé, possibly not that much. And yet, in reality, the car confounds expectations.

First, even before you get to the corners, it’s even quicker than the Porsche. The difference is not great, but it’s there. It sounds better, too, at least inside. Outside I’m told the Panamera was in spectacular voice with its optional sports exhausts, but inside the AMG’s soundtrack is sharper and more exciting. And if its nine-speed gearbox – an automatic rather than a dual-clutch but with a wet clutch in place of a torque converter – is any slower than the Porsche’s ZF unit, I couldn’t spot it.

But the real difference comes in the corners. I’m sure the Porsche’s case would have been improved had it been fitted with optional four-wheel steering (on the AMG it’s standard in the UK), but I can’t see it clawing back more than a little of the ground it loses here. The Mercedes feels better in every regard: more intimate, communicative and entertaining, while inspiring more confidence. And in cars this fast, vast and heavy, confidence is crucial. So accurate is its steering, so keen is its nose to sniff out an apex, so fluent is its damping, at times you could mistake it for a genuine sports car, which seems a ludicrous thing to write about a four-door car weighing so much. But I can report only as I find.

The drive home gave time to ponder its other appeals. Is it as quiet and comfortable as the Porsche? Probably a touch noisier despite the Panamera’s fatter footprints, but maybe a tad more compliant with the dampers in their softest settings. But it doesn’t matter because both are unreasonably good in both regards.

There is, then, a clear case for either car, and what’s curious is how each now trespasses on the other’s traditional territory. You’d expect a Mercedes to have more room for people and luggage and offer the better ergonomics, but it doesn’t. Likewise, you’d expect the Porsche to be the obvious driver’s choice, but it’s not. I expect the Panamera’s case would have been better served by the cheaper, lighter, barely slower standard Turbo, but enough to vanquish the Mercedes? I wouldn’t rule it out, but it is a little hard to see.

Don’t let that detract from what AMG has achieved here: unless tax concessions and practicality are numbers one and two on your priority list (and you’re prepared to pay a substantial sum for them), the Mercedes is the better car. To answer the question posed at the start, it is an immense all-rounder, superb in many regards, deficient in none. In short, it is a clear and worthy winner. A

BMW M5 COMPETITION
So here’s a question: why would you spend another £25,000 even buying the Benz (let alone the Porsche) when a BMW M5 Competition is just as quick, lighter still and has a bigger boot than either?

Style is clearly a factor: the AMG and Panamera don’t look like close relatives of everyday family saloons (even if, beneath the skin, the Merc has significant amounts of E-Class architecture). Their interiors are more luxurious, their sense of occasion more palpable. 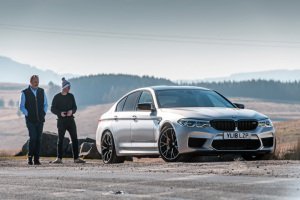 But out there on the road? Well, the BMW is not short of pace, it too has four-wheel drive and, like the AMG, can even be rear-drive only for the pleasure of the drift merchants. And yet I couldn’t get it configured the way I wanted for that road, the damping proving too soft in Comfort but too busy in Sport, let alone Sport Plus, and I expect that’s down to the Competition suspension mods. I’m sure they work brilliantly on the track to which no one will ever take theirs, but they are far less convincing on roads such as this.

In the end, the M5 Competition poses some good questions of these two but fails to make them look like expensive indulgences by comparison. Had we a standard – and less expensive – M5 with us, those questions might have been not only interesting but likely properly awkward, too.