The car maker has not instituted wholesale changes in its third-generation premium SUV, focusing instead on greater refinement both inside and out

Don’t expect any vaulting advances from BMW’s latest X3, the formula for this new version very similar to that of its predecessor. Given that BMW has sold more than 1.5 million X3s over the first two editions and 14 years, that shouldn’t be a surprise – inching intergenerational progress is the evolutionary hallmark of every car that’s a big hit.

In fact, this third-generation X3 contains useful advances on multiple fronts, not least on the aesthetic, dynamic, connected and tactile fronts. Tactile? If you order your X3 with Fineline open-pored wood, and Aluminium Rhombicle (!) interior trim highlights, you’ll discover that it’s impossible to resist touching these textures a second time, and many more, once you have run your fingers over them. The open-pored wood allows you to feel the contours of its grain on both dashboard and door tops, while the aluminium trim decorates the centre console, dashboard and more.

This may seem the stuff of mildly irrelevant detail, except that it underlines how well-finished this cabin is, regardless of your décor choices, making this latest X3 a particularly satisfying place to occupy. Especially if it’s filled with the panorama roof, leather upholstery and so-called Sensatec trim to the dashboard, this double-stitched pleather further heightening the aura of craftsmanship. More fundamentally, the seats are very comfortable. Those in the rear, which optionally recline, serve more space too, this the result of a wheelbase lengthened by 5cm.

Despite the stretch, this new X3 occupies very similar roadspace to the last, the rest of its dimensions barely changed. The ideal 50:50 weight distribution remains, but there are subtle and extensive changes to the suspension that promise a useful advance (detailed in the tech box on page 25). The X3 is game for modestly challenging off-road adventures too, what with its 204mm ride height, reasonable approach and departure angles and a 500mm wading capability.

A broad choice of engines is offered, ranging from a 181bhp 2.0i turbo petrol four to the 355bhp 3.0-litre six-cylinder M40i. The diesel 188bhp 20d and six-cylinder 261bhp 30d are provided in-between. All come with an eight-speed paddle shift automatic transmission as standard. Among these, only the 30d is significantly changed compared with the engines of the outgoing X3, its peak torque climbing usefully to 457lb ft from the previous 413lb ft; power output also rises slightly, from 254bhp to 261bhp. It’s this version that we test here.

The X3’s overall weight is up to 55kg lighter depending on the model. The combination of this and the 30d’s greater power slices its 0-62mph by a tenth to 5.8sec, while its top speed lifts to 149mph from 144mph. A sizeable drag coefficient reduction, from 0.36 to 0.29, also helps: aero improvements include air curtains across the front wheels, a rear spoiler with sculpted end-plates, additional underbody cladding and active radiator grille vanes. The double kidney grille itself is taller and distinctly more emphatic than before.

The new X3 carries a more athletic demeanour too. The gentle rake of its roofline, the slightly flat-topped wheel housings, the longer wheelbase and a more horizontal, waist-level bone-line that no longer begins with a Concorde-esque droop all conspire to make its predecessor appear slightly ungainly. Not that the outgoing model felt like that on the move, and this new X3 still less so.

It was BMW that built the first SUV that didn’t feel slightly precarious in a bend, the 1999 X5’s confident poise and keener steering making it easier to forget your distance from the road below. Over 18 years and 5.4 million X models, it has progressively improved on that, this latest X3 sufficiently at home with direction changing that you can chuck it about like a large hatchback.

The X3 30d is noticeably less incisive than the impressive new M40i, but it’s very able and doesn’t push its sporting capabilities to the fore, as befits this more mainstream version. Instead, you become aware of its strengths more gradually, rising miles uncovering confident balance, modest body roll, calmly responsive steering and a pleasingly supple ride. Off-road, where the X3 has deeper abilities than many similarly scaled crossovers, it has adaptive four-wheel drive, hill descent control and robustness in its armoury. The test car was fitted with variable damper control, which should be considered essential unless you’re numb to the niceties of ride and handling.

More widely appreciated will be the X3’s impressive refinement, the commotion of motion additionally suppressed by an acoustic windscreen and the improved aerodynamics. The BMW’s 3.0-litre diesel six is a civilised device too, its high compression combusting rarely betraying its diet. It also provides plenty of solid zest across a broad rev range, making any journey pretty effortless. In fact, below 1500rpm, this six is surprisingly sleepy, the fast-swelling strength of its torque suddenly undammed at 1500rpm. That would be annoying if this were a manual but, with a well-managed eight-speed auto harnessing the engine’s efforts, you must actively hunt out this shortfall to find it.

Despite what appears to be a reasonable level of standard equipment across the SE, xLine and Sport trims, the X3’s option list will almost certainly have you experiencing a budget shortfall when you uncover the desirable things on it. Traffic-enabled sat-nav, a reversing camera, certain online services and LED headlights are standard, but extra-cost options include BMW’s excellent head-up display, the variable dampers, various parking aids, a panoramic roof, reconfigurable digital instruments and a loadbay rail system. The loadbay itself is a reasonable 550 litres seats up, and 1600 litres with the 40:20:40 backrest automatically flung flat by its release catches.

The car beneath all this technology is a good one. It carries its SUV height and mass with aplomb, it provides fine-mannered dynamics that a keen driver will find reasonably enjoyable (the keen will favour the rapid and fleet-footed M40i, however) and its interior is that well crafted that it’s a pleasure to sit in and touch. There’s scope for configuring it to suit your favoured materials and palette too.

This X3 also bears the hallmarks of the car’s advance towards autonomy, if without breaking any new ground. More useful for many will be its heightened connectivity potential. Some will probably prefer to spend on that, and various other options, than choosing the 30d over the less potent but still brisk 20d. The 30d’s extra cylinders and extra thrust add refinement and go for no more than a small impact on economy. Indulgent diesels, however, could be becoming a thing of the past.

WHAT THE X3 DOES BETTER THAN BEFORE 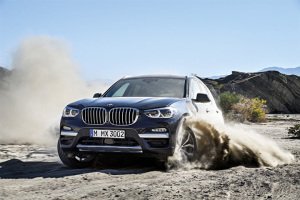 There are plenty of subtle improvements to the X3’s chassis and the all-wheel drive element of its transmission. A key aim has been to reduce unsprung mass, by making the hub carriers from aluminium and fitting hollow rather than solid anti-roll bars to reduce unsprung mass. Improved wheel control is the result, to the benefit of both roadholding and ride.

The X3’s roll moment, or theoretical pivot point when cornering, has been shifted rearwards in the interests of agility, and a greater proportion of torque is sent to the back wheels for the same reasons. BMW has also refined the suspension geometry. The standard wheel size is now 18in rather than 17in, better filling the X3’s arches, if less completely than the 21in rims that are the maximum optional size. Alloys of 19in and 20in diameters are also available.

Tester’s Note
For many, a car is a sanctuary from work – but, for those missing it, or whose workspace is their car, there’s a Microsoft Office 365 option allowing you to access emails and join conference calls via Skype. When stationary, of course. RB