The Audi E-tron is the third electric premium SUV to be revealed this year, following the Jaguar I-Pace and Mercedes-Benz EQC, as the bid to rule the zero-emissions sales charts ramps up.

Audi’s first stand-alone electric model has a 249-mile driving range on the WLTP test cycle. That is identical to the EQC, but behind the I-Pace, which manages 292 miles.

It is the first production car in the world to offer virtual side mirrors, using cameras with images appearing on screens in the door panels instead of traditional door mirrors.

Sitting between the Q5 and Q7 in size, the E-tron has a handful of design elements that  are intended to make it stand out from other Audi models. It keeps the single-frame grille but uses a lighter colour for the grille louvres. The E-tron also gets a name badge on the front of the vehicle, in a similar vein to what Audi does with its RS performance models.

There are also specific wheel designs for the E-tron, and orange highlights, for example, in the name badge and optional orange brake calipers.

Aerodynamics have played an important part in the design to help with the E-tron’s driving range, said Audi. The car has a drag coefficient (Cd) of 0.28. There is an air inlet with ducts for cooling the front brakes, adaptable, speed-dependent air suspension and a fully clad underbody. The E-tron also sits slightly lower than a traditional SUV: at 1616mm tall, it’s 43mm lower than the Q5.

The four-wheel-drive E-tron uses two asynchronous motors, one at the front axle and one at the rear axle, producing up to 402bhp and 487lb ft and achieving 0-62mph in under six seconds, with a top speed of 124mph. Energy to power the motors comes from a 95kWh battery — the largest on the market and matched by only Tesla’s top-of-the-range Model S 100D.

Single-stage transmissions transfer the torque to the axles via the differentials, and at moderate speeds, the lion’s share goes to the rear axle. At full load, it’s a 50/50 split. The car uses a braking and coasting recuperation system that, on average, contributes 30% to the driving range, says Audi.

Using upcoming 150kW public fast chargers, the E-tron will be capable of charging up to 80% in 30 minutes. Audi is one of a number of car makers (others include BMW, Daimler and Ford), to have invested in charging network Ionity. Audi says the network should have nearly 1200 150kW charging points running in Europe by the end of this year.

For charging at home, there is a standard 11kW charger, which charges the E-tron in 8.5 hours. An optional 22kW home charger halves this time.

The interior is in line with other Audi models, with its Virtual Cockpit and two screens, an upper 10.1in screen and a lower 8.8in screen, replacing most conventional controls.

Audi claims the E-tron beats rivals with its provision of rear leg room and front and rear head room. It has 660 litres of boot space split between the rear boot and a small front boot. That’s 160 litres more than the EQC. The front space is intended to give easy access to charging cables with the charging point near the A-pillar on the driver’s side. Towing capability is 1800kg.

The E-tron will be built at the car maker’s plant in Brussels with first UK deliveries scheduled for early 2019. Pricing is expected to start from £71,000 before the government’s plug-in grant.

Q&A STEPHAN FAHR-BECKER, AUDI EXTERIOR DESIGNER
Why did you decide on this design for your first stand-alone electric model?

“It was important to have an SUV. If you are sitting on a battery, the roof height creates problems. The Tesla Model S deals with this by making the car really wide. We were going to [design] something really mind-blowing and then customers said: ‘Can’t you just do a nice-looking EV?’. People aren’t ready for major change.” 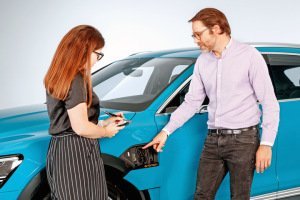 What was the biggest challenge?
“To find the right roof line. We needed it to be sporty and aerodynamic but also to be a full SUV. We had to find the exact height where people still perceive it to be an SUV while ensuring it contributes to range.”

What details will we see on future E-tron models?
“Apart from the single-frame grille, the front and rear lights will be a common theme. All the wheels will be more aerodynamic but look sporty. We also want to point out [in the design] where the battery is laying. That’s why there’s a wedge in the E-tron where the battery lays.”