Racing DNA courses through the Ford GT, but how is it being tamed for the road? The answer can be found in Canada, as Steve Cropley discovers 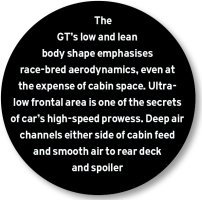 Ask a bunch of dyed-in-the-wool Ford enthusiasts where the Blue Oval’s mighty Le Mans class-winning GT is made and it’s odds on none of them would suggest an anonymous-looking collection of factories in the city of Markham, Ontario, about half an hour north of Toronto in Canada.

They’d probably be similarly surprised to learn that this same place has already served as the crucible for the key chassis, suspension and body parts of numerous other famous concepts and low-volume production cars, the Aston Martin One-77 and Vulcan among them. Right now, it is playing the same role in the lives of the forthcoming Red Bull-Aston Valkyrie and the Mercedes-AMG Project One, to name just two.

We’re visiting the engineering division of Multimatic, famous for its unique grasp of latest-generation composite and metal fabrication techniques – and well known among its prestige clients for a refreshing willingness to keep a low profile about its role in the creation of their most expensive and complex cars.

This modest approach reflects the remarkable character of Larry Holt, who has spent 30 years building teams of Multimatic engineering experts on either side of the Atlantic, by concentrating only on those client companies who need to know.

Now Holt and Multimatic have started doing something different. Having been partners with Ford in the GT project since the very beginning of the skunkworks design phase, the firm has moved to making the road car model – the first time it has ever made cars to a fully finished stage, ready to go to owners.

It is into the second year of manufacture and has already put about 150 hand-built GTs on the road, mostly in the US. The operation has now moved out of its build-up phase and is running at the planned production rate of one a day, en route to the ultimate target of producing 1000 cars by the end of 2020. To mark the milestone, Multimatic invited Autocar in to see how it’s done.

Until now, the GT has been best known as a Le Mans class winner, having achieved in 2016 its creators’ desire to emulate the GT40’s famous 1966 one-two-three victory on its 50th anniversary. Multimatic’s competition division, in conjunction with Chip Ganassi Racing, achieved the Le Mans milestone with what almost seemed like ease, although the racing GTs have laboured since with the rule-makers’ obsession with ‘balance of performance’ (aka giving the others a chance).

The GTs have been so handicapped that at times they’ve had to race with their engine outputs turned down to produce around 20% less power than the standard 655bhp road car. Even so, the Ford Chip Ganassi Racing team still finished last year’s World Endurance Championship in second place.

What makes the Ford GT so hard to beat? According to Holt, it’s the fact that the car was designed from the start to be a Le Mans racer. The weight has been designed to be very low for a supercar (under 1400kg at the kerb) and the whole machine is created with a low frontal area.

Holt says: “When you’re talking aero, people will always tell you your car needs a low drag coefficient [Cd], but experience soon teaches you that lowering a Cd is tough on a racing car. It is far better to cut the frontal area, which is what we’ve done with the GT. Ours is only 1.85 square metres whereas a Ferrari 488 GTE is around 2.15 square metres. Of course, it means the driver and passenger have to get to know one another very well in the cabin – there isn’t a lot of sprawling room – but that comes of driving a race car.”

There’s evidence of competition car thinking all over the vehicle. The hydraulic accumulator on the left in the nose is balanced by the (lightweight lithium ion) battery on the right. The windscreen is made of thinner (hence lighter) Gorilla Glass, as used on some mobile telephones. The rear body features two tunnels past the cabin that feed and smooth air on its path to the rear spoiler.

Most telling is the fact that when unclothed, the race and road cars are nearly identical. Both share a carbonfibre tub with a built-in FIA-approved roll cage (the racer also needs a cabin brace and extra door bars). As the two versions are clad with carbonfibre panels, the racer gets more exaggerated skirts, scoops and a hole in the roof to make driver extraction possible in an emergency, but the similarities remain very clear.

In each case, the central, passenger-carrying carbon tub abuts to an ultra-light, space-saving ‘investment casting’ (so named because the wax inner pattern is lost every time a piece is made) that carries the double-wishbone front suspension. At the rear, each model has a fabricated steel ‘z-frame’ behind the tub (steel is chosen because it best resists the heat generated by the 3.5-litre V6’s twin-turbochargers). The ‘z-frame’ connects to another alloy investment casting to carry the rear double wishbone suspension. The point is made: this road-going Ford GT is a competition car civilised for the road. 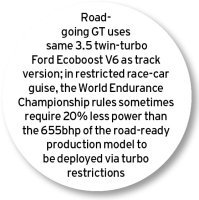 The road car has an ingenious suspension system that uses a torsion bar and a coil spring in series to provide correct ride rates for normal use. In Track mode, those coils are hydraulically locked out, greatly increasing the spring rates. At the same time, the system increases the damper rates (Multimatic makes its own) to match the stiff springs, and a built-in hydraulic jacking system lowers the ride height from 120mm to 70mm. In Track mode, says Holt, the GT “can get quite angry”.

All GTs have hydraulic power steering, but with the pump propelled by an electric motor, not driven off the engine as normal. “The future is electric power steering, no argument,” says Holt, “but we know hydraulics, and it’d take two years to refine an electric power assisted system to the point we’ve reached with hydraulic. Good drivers we trust say the system we have is fine, especially since we use a bespoke steering rack. Nothing else was suitable, so we made one.”

It takes about 25 days to build a GT in Multimatic’s purpose-built assembly shop, which runs from an initial chassis prep line through nine assembly stations and then several test phases. The cars are painted on the premises, a tall order because customer requirements are very high and their tastes can be exotic. Yet quality issues have been few.

At times, the first year was something of a nightmare, Holt admits ruefully, what with battling to increase production while never losing the focus on quality. Multimatic feels a particular responsibility to provide Swiss-watch-build standards, Holt says, because the Ford name doesn’t carry quite the same promise of quality as, say, Ferrari or Porsche. But now the plant has reached its intended production rate, things have become a lot easier. “This’ll never be a simple job,” says Holt, “but I can now say we’re pleased with how it’s going.” A