BMW has revealed its new, third-generation Z4, with a renewed focus on driving dynamics to take on the Porsche 718 Boxster. The new Z4, developed in conjunction with Toyota’s upcoming Supra, made its public debut in the US at the Pebble Beach Concours d’Elegance in California, with global sales due to commence later this year.

The new roadster will make its European debut at the Paris show in September, when BMW will reveal more about its mechanical package ahead of right-hand-drive deliveries to the UK early next year. The first derivative to be unveiled is the flagship M40i Performance First Edition, which will use a 335bhp turbocharged 3.0-litre straight six.

The 718 Boxster rival has been designed and engineered from the ground up in a move aimed at reigniting buyer interest in roadsters in the face of dwindling sales over recent years. As well as boasting a completely new look with more distinctive proportions, the new BMW adopts an electrically operated fabric hood. The new structure is claimed to weigh 60kg less than the folding hard-top of the Z4 Mk2, while providing the basis for a lower centre of gravity and what BMW officials describe as “more sporting driving attributes”.

The new Z4 also uses a brand new platform, which will be shared with next year’s resurrected Supra in a joint engineering programme between Toyota and BMW (see separate story, p9). The design of the steel and aluminium structure is described as being unique, although it adopts chassis, suspension and electrical components from BMW’s cluster architecture (CLAR) platform, as used by the latest 7 and 5 Series, the new X3, X4 and X5 and the upcoming seventh-generation 3 Series. The Z4 will be built by Magna Steyr at its assembly plant in Graz, Austria, alongside Toyota’s sports car, which also launches next year.

With a brief to deliver more dynamic driving qualities than its predecessor, the new Z4’s platform incorporates extra-wide sill elements that are said to contribute to a more than 30% increase in torsional rigidity over its predecessor. BMW has described the new Z4 as the stiffest open-top car the manufacturer has yet built, and claimed it to be stiffer even than the fixed-roof M4.

Despite increased exterior dimensions, including a significant 70mm increase in width, the new Z4 is also said to be around 50kg lighter than its predecessor, suggesting the M40i will tip the scales at under 1500kg. The six-cylinder engine that powers it is the same as that offered in a number of existing BMWs. With 335bhp and 332lb ft in the M40i M-Performance First Edition model, it propels the new two-seater from 0-62mph in 4.6sec and on to a limited top speed of 155mph. Fuel consumption and CO2 emissions are set at 39.7mpg and 162g/km respectively.

The range-topping new Z4’s peak power is 3bhp shy of the 338bhp made by the naturally aspirated 3.2-litre in-line six in the old Z4 M Roadster, a performance version of the first-generation Z4 produced between 2006 and 2008. Although it can’t quite claim to be the most powerful Z4 yet, the M40i M Performance’s 332lb ft beats the Z4 M Roadster by 63lb ft. By way of comparison, the Porsche Cayman S uses a turbocharged 2.5-litre horizontally opposed four-cylinder with peak outputs of 345bhp and 310lb ft.

Known internally under the codename G29, the new Z4 is also set to be sold with a turbocharged 2.0-litre four-cylinder petrol engine. That power unit is expected to develop at least 180bhp in a planned entry-level Z4 sDrive20i model and, in a higher state of tune, in the region of 260bhp in a mid-range Z4 sDrive30i model.

While full details are yet to be confirmed, it is understood that the base Z4 sDrive20i will offer the choice between a standard six-speed manual gearbox and an optional eight-speed automatic, while the remaining models will all be equipped with an eight-speed automatic as standard. The M40i M Performance variant comes with an electronically controlled M Sport rear differential.

Early rumours suggesting the new BMW roadster could be given the option of four-wheel drive on certain variants have been denied by Munich officials, who confirm instead that it will be sold exclusively in rear-wheel-drive guise.

In a move that would take it into direct competition with the likes of the Jaguar F-Type 3.0, BMW is also said to be developing a Z4 M variant featuring the same turbocharged 3.0-litre in-line six-cylinder engine launched in the new M2 Competition, with around 405bhp and the same 332lb ft as the Z4 M40i M Performance. The outgoing Z4 was never offered with an M-tuned variant, backing BMW’s claims that the new model has become a more sporting model. With the six-pot mounted well back in the engine bay, the new Z4 is said to boast a 50/50 weight distribution. In M40i M Performance First Edition guise, the Z4’s suspension, which uses a combination of double wishbones up front and a five-link arrangement at the rear, features multi-mode electronically controlled dampers. An M Sport braking system and 19in alloy wheels featuring a bicolour, double-spoke design are also standard on the launch model.

The interior of the new BMW features a new driver-orientated dashboard with technology taken from BMW’s latest saloon cars. Digital instruments and a touchscreen monitor for the infotainment functions have also been added, along with newly developed seats and a Z4-specific set of controls housed within a broad centre console.

Among a long list of options are a head-up display and a Harman Kardon sound system, both of which are fitted at standard to the M40i M-Performance First Edition. That generously equipped derivative will also feature black leather, electrically adjustable seats with a memory function and adaptive LED headlights.

CAN THE Z4 DO SHOW AND GO?
James Attwood

Style is subjective, of course, but the Z4 looks right, with a design that improves on that of the previous version. Does that matter? After all, the old Z4 looked the part but couldn’t fully deliver on that promise when it came to driving.

Having had a brief drive in a prototype Z4 earlier this year, I’m encouraged that it was time well spent – although, obviously, we won’t know for sure until our testers get an extended run in the finished version. But I’m hopeful it will deliver both style and substance.

HOW WILL THE SUPRA COMPARE?
At Toyota, former GT86 chief engineer Tetsuya Tada is working on the new Supra, a job he first thought he’d be doing 15 years ago.

That the new Supra needed to be true to its predecessor is why Toyota involved itself with BMW. “When we decided we were going to do this, we didn’t just want a revival or a rehash of what we had before,” Tada said last month at the Goodwood Festival of Speed. “We wanted to ask all the Supra fans around the world what was essential, and I tried to look for these conditions. The answer was clear: an in-line six, turbo, front engine and rear-wheel drive. A lot of manufacturers had stopped making in-line six engines; BMW was the only one continuing with an in-line six.”

The Supra is yet to be revealed in its finished form, but beneath the disguise the model Toyota revealed at Goodwood is, aesthetically at least, finished. “We still have another half a year for it to be mature engineering-wise,” Tada said. “We’re still working on some of the handling aspects and finer details.”

Tada said the Supra’s centre of gravity is “even lower” than that of the boxer-engined GT86, ensuring its handling will be both neutral and adjustable. As with the BMW, the Supra’s weight distribution will be 50/50 front to rear, and although Toyota hasn’t confirmed specific details yet, Tada did reveal that the Supra will produce about 350lb ft and weigh approximately 1500kg.

Q&A CALVIN LUK BMW Z4 DESIGNER
BMW’s reborn roadster sets the tone for a new era of design language for the brand, according to the Z4’s exterior designer Calvin Luk.

“The new design language on this and the 8 Series is about minimising line work,” he explained. “The philosophy is a couple of major lines coupled with softer lines.” 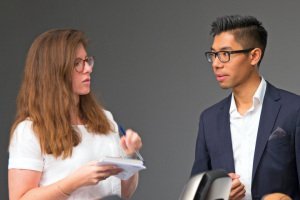 BMW’s kidney grille has been designed with a new mesh, which is expected to appear on other models. Luk said the shape evokes “the 328 Mille Miglia race car”.

The Z4 also features a reinterpretion of BMW’s ‘double-round’ lights, with the units stacked on top of each other, a design motif which hasn’t been done on any BMW model previously.

Luk also worked on making the Z4 more driver-focused, fitting in with the increased emphasis on involvement.

“The wheelbase is slightly shorter but we’ve brought the driver forward a little to bring the focus back to him or her. Before, the hood was a bit too long,” he said.

At the rear, the focus was on creating a wide stance and reducing shutlines.

What were the biggest challenges when designing the new Z4?
“Every project has unique challenges but the front end tends to be the most problematic because of the required crash structures. For example, we tried to get the kidneys as low as possible but we would probably have put them even lower if it weren’t for other considerations.”

What does this car mean to you?
“The proportions were inspired by the Z8, which was one of my favourite cars growing up. We also looked at the Z3, designed by Joji Nagashima, a mentor of mine. I drive a first-generation Z4 and my parents drive a second-generation Z4, so it’s an emotional project for me.”

Have you compared design notes with Toyota given that the Z4 and upcoming Supra were developed together?
“The Supra was a really independent operation. I’ve never spoken to anyone at Toyota during the design of the Z4.”