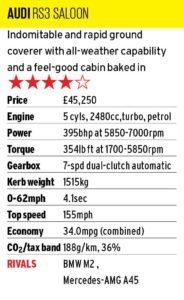 When Audi launched the previous RS3 back in 2015, some bright spark at its advertising agency, doubtless tickled pink by the thought of a hatchback with a bisected, turbocharged V10 cylinder bank under the bonnet, had the idea of showing the car being ‘born’ to a tortured, sweat-covered R8 in a two-minute commercial.

Setting aside its exuberant graphical detail – which inevitably and intentionally garnered mild controversy – the film is ultimately contemptible because, in reality, the RS3 had about as much to do with the R8 as Bhutan did with the birth of rhythm and blues.

Sure, it had 362bhp and permanent all-wheel drive, and could scorch from origin A to epilogue B in the time it takes to decipher an emoji, but its relationship to Neckarsulm’s spaceframed, mid-engined masterstroke stopped at a few shared chromosomes in the engine bay. Where the R8 was taut like a bowstring and about as biddable, the RS3 stayed permanently riveted to the same old set of notes.

Its replacement only really breaks the mould in one sense: alongside the familiar Sportback, Audi has opted to make it available as a saloon, too. On paper, at least, the decision ought to be as stymieing to the model’s desirability as having the bodywork made of placenta. The recent introduction of Mercedes-AMG’s CLA45 notwithstanding, compact saloons have typically proven about as popular in the UK as root canal work – think Volkswagen Jetta, Skoda Rapid or Vauxhall Nova Belmont.

But think again. Those models were viewed with withering suspicion because they looked funny: a symptom of putting a longer, three-box body on a comparatively skinny car. The RS3 is emphatically not skinny. Compared with the A3, it has had its front track widened by 20mm and its rear by 14mm. And even if it had not, the car’s substantial 19in wheels and dramatised styling would likely ensure that its proportions appear agreeable.

The power comes, still, from the half-pint V10, Audi Sport having again made an overhaul of the 2.5-litre five-pot the focus of its efforts. Alongside its obvious muscle gain, the engineers have mercilessly slashed away at the engine’s paunch, fitting a magnesium sump and replacing the iron block with a lightweight alloy alternative. All told, the RS3’s front axle has been unburdened to the tune of 26kg. The Sportback now weighs 1510kg, while the saloon is 1515kg – moderately less than a Mercedes-AMG A45 or even a rear-wheel-drive BMW M2.

An Audi S3 Saloon – the RS3’s authentic closest living relative – is 45kg lighter still on paper and equally as satisfying to sit in, but there the comparison ends. The S3 is powered by the 2.0-litre EA888 unit in its Volkswagen Golf R format. The RS3 is powered by gluttony, a 1-2-4-5-3 firing throb and a two-phase injection system that presumably unleashes a tsunami’s worth of super-unleaded into the manifold come 4000rpm.

In a straight line, the difference between old and new could almost be called subtle. The net effect, though, is not. The RS3, be it a saloon or hatch, remains bewilderingly fast. Fast enough from a standing start to trouble your blood flow; fast enough even to almost convince you that your phone is dropping 4G because the radio waves can’t keep up. Strapped to our timing gear in 2015, the last model clocked 3.9sec to 60mph while two-up under road test conditions. Lord knows how many fractions the latest iteration has ousted from its sprint time.

Whether or not its visceral savagery is actually soul-movingly immersive is another genuine question, yet it is made to feel of middling importance by the sheer heft of the end result. Certainly, as before, the car feels huddled around its monster powertrain, although it is to the chassis’s considerable credit that it never feels remotely overawed by the additional effort. Indeed, 30-odd horsepower of additional forcefulness is folded impassively into the workings of a reportedly quicker-witted and lighter clutch plate-based quattro system. Typically, it makes itself felt in a similar fashion to the latest RS5. In low-speed corners, a bulkhead-finding amount of throttle input will have the torque manifestly vectoring to the outside rear wheel, conferring (in the wet, at least) the fleeting impression of a more sophisticated front-to-back balance. Given the RS3’s previous preference for understeer, any effort to draw dynamic attention away from the (optionally) fatter front tyres is to be cheered. So, too, is the mostly benign temperament of the standard passive suspension. Very slightly more forgiving in the saloon than in the Sportback, the car rides firmly and energetically but is rarely incessant despite an unambiguous vertical stiffness. The optional Sport set-up, complete with Audi’s familiar adaptive dampers, makes life more pleasant still with a slower-rate Comfort mode, although its sportiest setting is arguably too rheumatic for UK roads, making suspension choice a mildly contentious issue.

More contentious still are the RS3’s unresolved irritations. The steering remains a vague bugbear. Over-assisted in its easier setting and still a bit fudgy in Dynamic, the rack never feels a notch above adequate. That’s a shame.

The seven-speed S tronic dual-clutch automatic gearbox has its moments, too. It has supposedly been made quicker, but it’s still not beyond the occasional bungled downshift or scatterbrained pull away. Also, its paddles are too small and not nearly mechanical enough in feedback to properly punctuate the kind of extravagant, full-bore upshifts that are taking place beneath you.

Elsewhere, the model is handsomely equipped. In the UK, Audi’s Virtual Cockpit system is standard, although charging £1000 for the crucial RS Sports exhaust seems a little mean, and the pop-up infotainment screen is plainly of a lesser standard than the latest Volkswagen Golf R’s touchscreen.

Nevertheless, the RS3’s status as a time-compressing, high-priced, real-world wunderkind is untroubled. All-weather, unflappable velocity remains its chief selling point, and the latest model possesses it in prodigious quantities. At times, it almost insists upon the kind of expectation reset that you’d normally have to apply to a supercar’s on-road ability; the kind that keeps your driving licence out of harm’s way. It also sounds spectacular on song, and the new saloon format – destined to go down a storm in the US – not only enhances its do-anything credibility but also spreads it neatly apart from the differing appeal of the A45 and M2. Being fractionally quicker than both won’t hurt, either.

If you’re going to go to the trouble of stitching Alcantara onto the steering wheel rim, why not go the whole hog? Retaining leather top and bottom feels like a half measure. NC 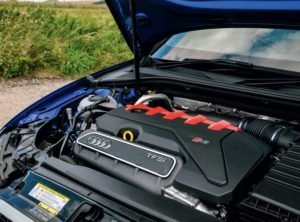 Unsurprisingly, the latest version of the hand-built 2.5 TFSI petrol unit is the most powerful five-pot in RS production history, as well
as being an eight-time consecutive recipient of the International Engine of the Year award in its category. Although peak output is enhanced, it is the material alterations made in its construction that chiefly distinguish it from its predecessor.

The compacted graphite iron crankcase has been replaced with alloy, the crankshaft bearings are 6mm smaller in diameter and the crankshaft is hollow bored. Hence the new, lower, 154kg total weight.

Elsewhere, measures have been taken to reduce internal friction, including a plasma coating for the cylinder barrels and intergrated channels in the pistons for improved oil cooling.