The Proton X50 is going to set new expectations for safety equipment in the sub-RM100k market when it’s launched but let’s be clear, it’s not because it’s a cut-price Volvo XC40 under its skin. The only connection between the two SUVs is a common substantial shareholder, Zhejiang Geely Holding Group Co Ltd.

The front of the X50 is miniature X70 while the rear is attractively different with a chrome strip through the tail lamps. The SUV is offered with two 1.5-litre three cylinder turbo engine options, a T and a TGDi, both co-developed by Geely-Volvo but built by Geely in China. The transmission is a seven-speed dual-clutch, also Geely-built. Noteworthy is that it’s a wet-clutch dual-clutch. Most other manufacturers at this price point would install either a CVT or at best, a dry-clutch version.

The reason for offering two versions of the same displacement in the X50 is also cost. The 1.5L T has port injectors while the 1.5L TGDi has direct injection. Port injection turbos are older technology and cheaper to manufacture. They are also easier, and cost less, to maintain and are more durable in the long term. Reliability of either shouldn’t be an issue: the engines are already in more than 550,000 cars around the world and have endured over 1.9 million kilometres (or 40 times around the world) of testing.

The flagship TGDi’s output is 175bhp and 255Nm of torque versus 148bhp and 226Nm in the T, which will be in the three other trim levels. The claimed consumption for the T is marginally higher at 15.4km/L than the TGDi’s 15.6 but that’s negligible over daily use. Direct injection also would make the TGDi more responsive.

We were invited to experience the Proton X50 at Sepang International Circuit. Our actual driving time was less than two minutes – at most – but it was more for Proton to showcase the X50’s new safety features which earned it a five-star ASEAN NCAP safety rating. The X50 will be the safest and most affordable car in the market with Level 2 Autonomous. For less than RM100k, a car that can bring itself to a complete stop in an emergency is a new benchmark.

The Advance Driving Assistance System is on par with the specs in more sophisticated, costlier cars in the market, comprising

Another class-leading feature was the Auto Park Assist. We’re not fans of the feature because they’re usually not user-friendly and it’s faster to park the car ourselves. The X50’s is the easiest we’ve come across – an easy-to-find button on the gear console. Press and select the type of parking – parallel or perpendicular – then keep your finger on the button while the X50 gauges the lot, reverses in, manoeuvres itself straight then stops itself once the car is parked. It also takes you out of parallel lots. All while the are hands off the steering wheel.

The SIC track didn’t give a fair picture of the X50’s ride and suspension stiffness but Proton stated that the ride and handling had been optimised for Malaysian roads with new springs, dampers, anti-roll bar and power steering system. The handling was crisp and there was little weight shift during the slalom and lane change exercise, the only time we had behind the wheel. 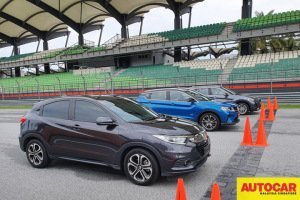 There was zero to a hundred race between the X50, BMW X1 sDrive18i and Honda HR-V. Proton against a luxury brand three-cylinder SUV costing twice as much vs the best-selling SUV in its price range – high aspirations, or a fruit salad comparison? Based on fire power, the outcome was a forgone conclusion since the X50 TGDi outgunned the 138bhp/220Nm X1 and the naturally-aspirated HR-V with 140bhp/172Nm further hampered by CVT.

The lack of bumps and shakes did offer a distraction-less chance to experience the three-pot engine which was unremarkable in a good way. Even at full throttle the engine sounds didn’t intrude into the cabin.

The red and black colour combination for the leather interior was gaudy but it looked premium, especially combined with the brushed aluminium finishes on the dashboard and gear console. The rear leg room was generous for a B-segmenter and the seats comfortably well bolstered. There was also a rear aircon vent, a small feature which makes a world of difference in the tropics.

To date, over 20,000 X50s have been booked – even before the official launch or a price announcement. Every manufacturer with a model RM200k and under should be worried.

Sime Darby Auto Connexion has launched a new variant of their award-winning Ranger pick-up truck, the Ford Ranger XL Standard The XL Standard is powered by a 2.2-litre turbodiesel engine which chucks out 123bhp and […]