Kia’s newest Sorento SUV is now bigger and features an upmarket cabin, as well as uprated chassis and suspension for improved handling and refinement.

The 2020 Kia Sorento has made its debut featuring an all-new design, increased dimensions, refinement and a comprehensive list of new tech. The fourth-generation Kia Sorento is far from its utilitarian beginnings and upping the ante from the outgoing version. At launch, the 2020 Kia Sorento comes with diesel and hybrid drivetrains, while plug-in hybrid to follow later this year.

Placed at the heart of Kia’s reinvigorated global SUV line-up including the Seltos, Stonic, Telluride and Sportage, the all-new 2020 Kia Sorento is 10 millimetres longer, while the wheelbase is extended by 35 mm (2,815 mm). And despite being 10mm taller, Kia has lengthened the bonnet and pulling the A-pillar 30mm further back from the front axle.

Built on an all-new platform, the Kia Sorento sees a 4% average increase on tensile strength through its structure which results in reduced Noise Harshness Vibrations (NVH), aided by the Kia Sorento’s heavily revised independent suspension system. 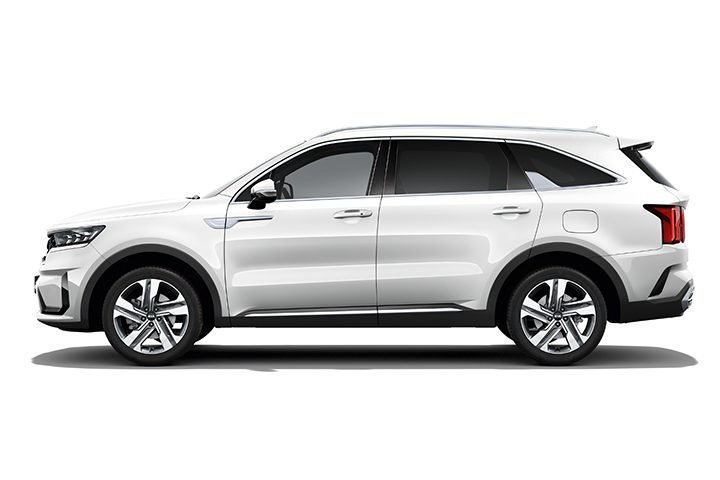 The revisions include new suspension geometry and components, which also help to improve the SUV’s body control and steering responses under cornering.

Besides the new tiger-nose grille design and LED headlamps, the Sorento features new vertical tail lamps inspired by the Telluride, which wraps around the sides of the body. The Sorento will be available in Europe with a choice of 10 paint finishes, and the option of 17-, 18-, 19- and, 20-inch aluminium alloy wheels.

Nevertheless, the 2020 Sorento’s interior is what Kia’s flagship SUV is all about. Kia says that the Sorento’s cabin is a step-change in quality and design from all of its vehicle range. Even by looking at the images, the interior is – according to Kia – furnished with quality materials, moreover, the quilted and perforated seats are the cherry on the proverbial cake. 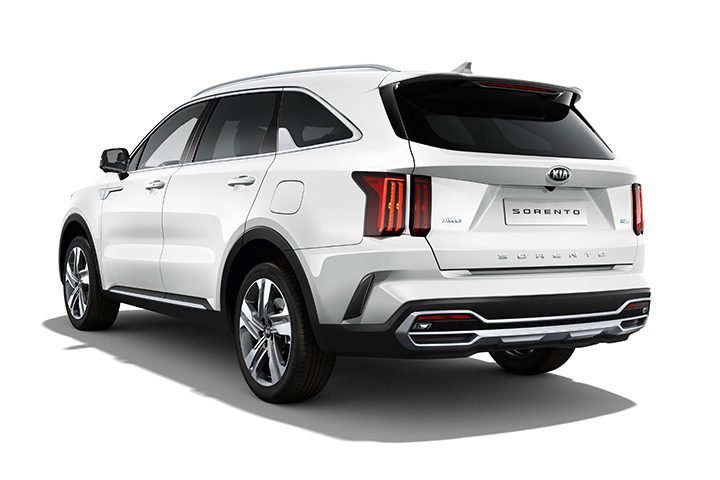 With that said, the cabin highlights a blend of metallic trim, leather and embossed satin-effect surfaces, which appears to be a growing trend in modern interior designs. For European markets, the Kia Sorento is offered with a choice of black cloth, leather (grey or black single-tone, or black-and-grey two-tone), or black quilted Nappa leather.

Judging from the photos provided by Kia, the 2020 Kia Sorento’s dashboard is evident of the mid-size SUVs rise in refinement. Standing in front of an audience of two, the Sorento’s twin digital displays consists of a 12.3-inch digital instrument cluster and paired with a 10.25-inch touchscreen infotainment and navigation system, depending on specifications.

In addition, the vertical ventilation stack’s chrome elements surround adds up the upmarket feel in the Sorento. Many of the Kia Sorento’s functions are accessed with new haptic buttons on either side of the screen which blends seamlessly with the digital screens. The haptic buttons are also found on the Kia Sorento’s automatic air conditioner interface and lower centre console. Also, gone is the automatic gear lever, and in with the rotary dial drive selector reminiscent in many Jaguar-Land Rover vehicles. 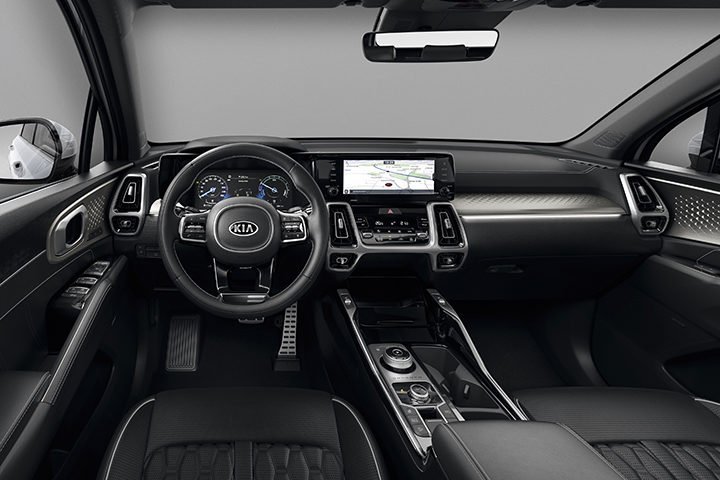 And being in tune with the times, the Sorento comes with mood lighting as well beneath the dashboard and door trim. But the Korean carmaker did not disclose the number of colours available. Moreover, a wireless smartphone charger is accessible at the base of the centre stack. Sound reproduction comes from a Bose surround sound system which is likely to come optional or available in higher trim levels.

Now with a hybrid powertrain option available, the Sorento’s all-new platform accommodates the Sorento Hybrid’s battery pack under the floor of the cabin. This allows the SUV to sit up to seven people as well as boasting a class-leading boot capacity of 821-litres for the seven-seater variant and 910-litres for the five-seat models.

With only 89-litres in between the five- and seven-seater versions, the latter sees an increase of 32% compared to the predecessor. Moreover, the new platform now provides more room in terms of head, leg and shoulder room for all three rows.

In terms of powertrain, Kia’s newest Sorento will come with diesel, hybrid and plug-in hybrid powertrains. Boasting 227 bhp and 350 Nm of torque, the hybrid powertrain consists of a turbocharged direct-injection petrol 1.6-litre T-GDi engine with a 59 bhp electric motor. Electric energy is stored in a 1.49 kWh lithium-ion polymer battery pack.

The new 2.2-litre Smartstream diesel engine is also available for European customers, producing 199 bhp and 440 Nm torque. The new diesel engine weighs 19.5 kg lighter thanks to its new aluminium block than its predecessor. Moreover, it’s 38.2 kg lighter compared to that in the third-generation Sorento. The diesel engine is connected to Kia’s new eight-speed wet double-clutch transmission.

The drive from the hybrid power unit is translated through a six-speed automatic transmission via transmission-mounted electrical device (TMED). As described in Hyundai Motor Company’s patent, TMED help reduce the vibrations when the engine is switched off and allowing the engine full power and motor to be transferred with minimal loss of energy. Thus resulting in reducing the acceleration response time at any speeds. 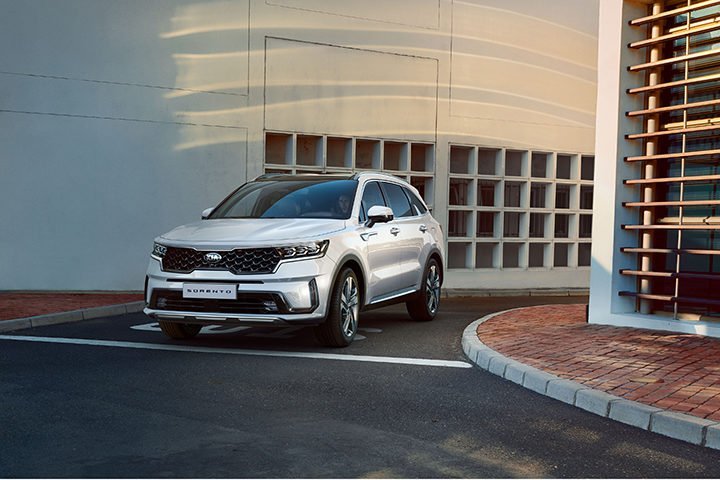 The Sorento Hybrid Powertrain will go on sale in selected European countries from launch, while other markets will follow later in 2020. Likewise, the plug-in hybrid version will come in late 2020. Fuel efficiency and emissions data for the Sorento’s new powertrains will be announced closer to the car’s European on-sale date later in 2020.

Like the previous generation, the new Sorento will be built for Europe and many other markets at Kia’s Hwasung manufacturing facility in Korea. The car will also be built for North America at Kia’s West Point, Georgia, USA production plant.

Kia says that European sales are due to commence in the third quarter of 2020, while the flagship mid-size SUV will be available to order in most of Kia’s global markets slated by the end of the year.

Perodua has delivered 13,000 units of the Aruz SUVs to date

Over 25,000 booked making the seven-seater SUV one of Malaysia’s best selling SUVs Perodua has announced that they have delivered 13,000 units of the Aruz. This is 52% of the 25,000 bookings, narrowing the order-delivery […]

Limited Edition CX-3 comes with exclusive styling and design features  Mazda is celebrating its 100th anniversary with the launch of a limited edition CX-3. The SUV is fitted inside and out with exclusive kit which […]