Besides the drivetrain, the new PHEV flagship boasts unique styling features which set it apart from the standard variants. Some of the highlights are the e-tron inspired LED headlamps, chrome trim on the front bumper and chrome inlays in the door handles, the rear diffuser with inserts and chrome clasps, and 19-inch 5-arm turbine design aluminium wheels.

Besides the standard equipment, Audi also provides optional HD matrix LED headlights with Audi laser light and OLED rear lights. For the A8 L 60 e quattro, Audi provides more than 30 driver assist systems for the plug-in hybrid sedan which are divided into the City and Tour packages.

Under the hood lies a 3.0 TFSI turbocharged V6 direct-injection engine with a gasoline particulate produces 337 hp and 500 Nm of torque. Mated to it is an eight-speed tiptronic automatic transmission which sends power to all four wheels via the quattro permanent all-wheel drive system. Located in between the engine’s flywheel and the clutch is a permanently excited synchronous motor (PSM) with a peak output of 100 kW and a peak torque of 350 Nm to provide an all-electric drive. 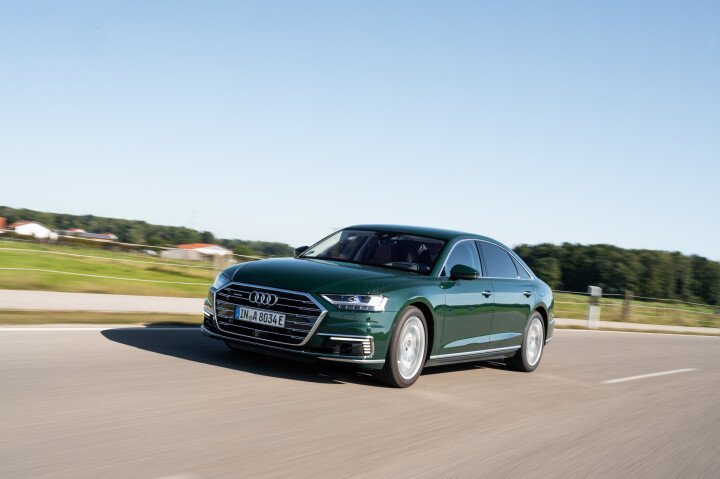 Together, the overall system power stands at 447 hp and 700 Nm of torque, with combined fuel consumption of 2.7 – 2.5 l/100 km. Performance-wise, the A8 L e quattro sprints from nought to 100 km/h in 4.9 seconds and reaches an electronically governed top speed of 250 km/h. The Audi A8 L 60 TFSI e quattro can drive solely on electric power up to 135 km/h, and its electric cruising range is up to 46 kilometers (WLTP).

The power electronics converts the direct current from the high-voltage battery (HV) into three-phase current to power the electric motor. During recuperation, it functions as an alternator and feeds direct current back to the lithium-ion battery.  The HV battery stores 14.1 kWh of energy and delivers a voltage of 385 V. Charging the battery can be done with a connection to a voltage of 400 V and a current of 16 A, taking an estimate of two-and-a-half hours to fully charge the battery with a maximum output of 7.4 kW. With a domestic power socket with 230 V/10 A, an empty high-voltage battery can be fully charged with 2.3 kW in around six-and-a-half hours.

While driving in pure electric drive, the Audi A8 L 60 TFSI e quattro comes with a synthetic e-sound as standard to alert pedestrians and cyclists in city traffic. In accordance with the EU guidelines, the acoustic vehicle alerting system (AVAS) can be heard clearly up to 20 km/h (12.4 mph) and gradually fades out as the speed increases. The sound is generated by a small electronics box and output by a loudspeaker in the right wheel arch. 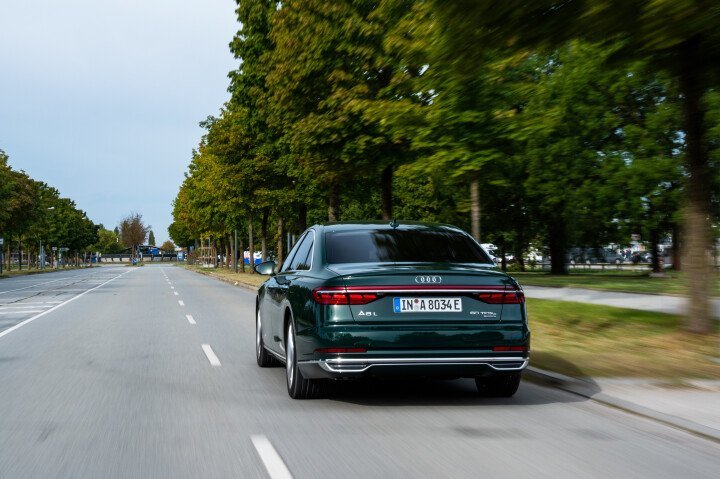 In the Audi virtual cockpit and on the display of the standard operating system MMI touch response, the driver can view a variety of information on electric driving including a power meter, range and the current energy flows of the two drive units. At the central display element, the power meter provides information on the maximum electric performance as well as coasting or braking recuperation.

The A8 L 60 TFSI e quattro can be connected to the owner’s smartphones via the myAudi App. The app relays the car’s current battery and range status, begin the charging process, program the charge timer and view the charge and consumption statistics.

EV Charging stations are also shown both in the myAudi app and in the MMI navigation plus (standard equipment) in the car. Another function in the A8 plug-in hybrid version is pre-entry climate control, which primes the air conditioning system using the energy from the high-voltage battery or the socket to heat or cool the interior. With the app, the driver can also active the steering wheel, seat, mirror and front and rear window heaters as well as seat ventilation to suit their individual requirements.

The all-new 2020 Audi A3 Sedan sees increased dimensions, smart features and mild-hybrid drivetrain included. Audi has launched the 2020 Audi A3 Sedan, following the launch Audi A3 Sportback more than a month ago. Like […]

Audi AG has launched the all-new Audi A7 Sportback, their four-door all-wheel drive Gran Turismo has been described as being three cars-in-one – the look of a coupé, the versatility of a station wagon and […]