The Mini Cooper S Countryman Pure is the base model in the Countryman range carrying a price tag of RM228,888. If you’re familiar with the car market, a base model would usually mean that the car only comes with bare essentials. Most of the time it’s to fit within a price bracket and sometimes depending on the need of their customers.

Base models in the context of mainstream offerings usually come with the basic standard features like aircon, a single-DIN radio, steel wheels, bog-basic fabric seats and just that. However, when it comes to the Mini Cooper S Countryman Pure, its own definition of a base model is entirely different. It has all of the creature comforts, but not the full-blown equivalents in the upper ranges. As vanilla the 2019 Mini Cooper S Countryman Pure can be, it’s well equipped without compromising on comfort and convenience. The basic Countryman comes fitted with the Standard line exterior which looks more conservative than the ones on the upper trim levels. However it doesn’t lack the essentials; the Pure comes packed with LED headlamps and cornering lights, daytime driving lamps, fog lamps and clear signal indicator lamps. Moreover, it comes with the Mini Logo Projection to welcome the driver. At the rear, the brake, signal and reverse lights are bulb types except for the LED tail lamp. Other than that, the Countryman Pure rides on 18-inch Pin Spoke wheels in gloss black and roof rails and side sills in silver. And whichever the six exterior colours they fancy, owners get to choose to have the roof, wing mirror caps and bonnet stripes to be in either white or black. Things get more interesting inside, the dashboard is reminiscent of the Minis in the past but with a modern twist. You won’t find any sharp edges with many soft-touch surfaces on the dashboard, where the only hard surface found are the Haze Grey plastic trims, which runs across at the bottom half and on the door cards.

Despite being a BMW product, what’s amazing is that many of the parts are not taken from the parts bin from other BMW models as expected in other brands under the same group. None of the switches, knobs and buttons in the Mini Countryman are to be found in other past and present BMW models. However, drivers who are familiar with the BMW brand would know what’s up; like the signature hot orange illumination of the instrument cluster, dials and buttons, the memory seat buttons with an opaque red ‘Set’ button, the self-correcting signal indicator stalk, and the Steptronic gear selector’s typeface and shifting pattern. Even the Mini Connected user interface is heavily adapted to the BMW iDrive’s information architecture to suit the Mini branding look and feel (more on that to come). The leather-clad seats at the front are 8-way electrically adjustable with two memory presets on the driver’s side. These seats also offer adjustable lumbar support and manually retractable thigh support for occupants with long legs (like me). The steering column is both telescopic and height-adjustable which enable drivers of many sizes to find their happy spots in the Countryman.

At the back, the rear bench folds 40:20:40, which allows flexibility of seating arrangement to accommodate either passengers, payloads or both. Being the biggest Mini model in the range, the Countryman has adequate leg and plenty of headroom for individuals under 180cm in height. Also, the rear seats come with ISOFIX guides for compatible child seats. There’s also a retractable centre armrest with two cup holders.

The rear hatch can be lifted via the keyfob or by kicking the underside of the rear bumper. The aperture is wide and tall which allows persons to load and unload large and bulky items. The boot capacity is rated at 450-litres with the rear seats up and folding them down flat frees up to 1,390-litres. 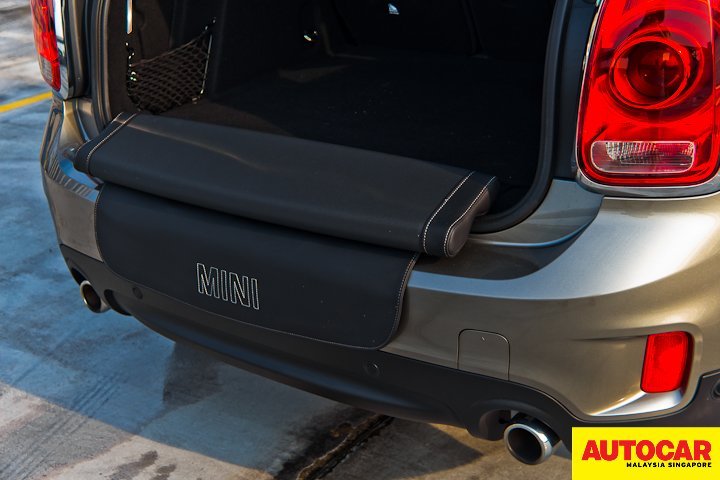 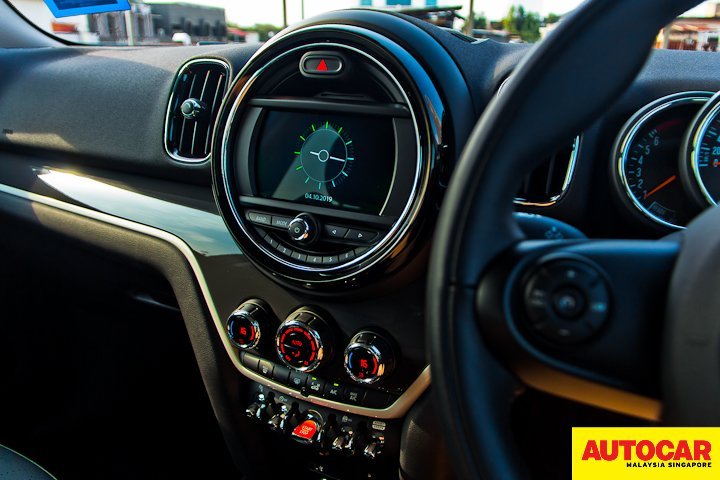 Taking a central real estate in the interior is the 6.5-inch touchscreen. The graphics are sharp and the animation is smooth without any stuttering or lag, it’s as if like you’re watching a YouTube ad on a smartphone.

The Mini Lights Package is a semi-circular array of LEDs that correspond to the infotainment system. It changes colour according to the driving modes of Green, Mid and Sport (green, amber and red), the latter is momentary as it changes to become an engine rev counter. Not just that, it also changes colours as per to the proximity sensors when parking. Also, it changes accordingly as to the climate control temperature gauge, audio volume and also works as an Eco gauge in Green drive mode. 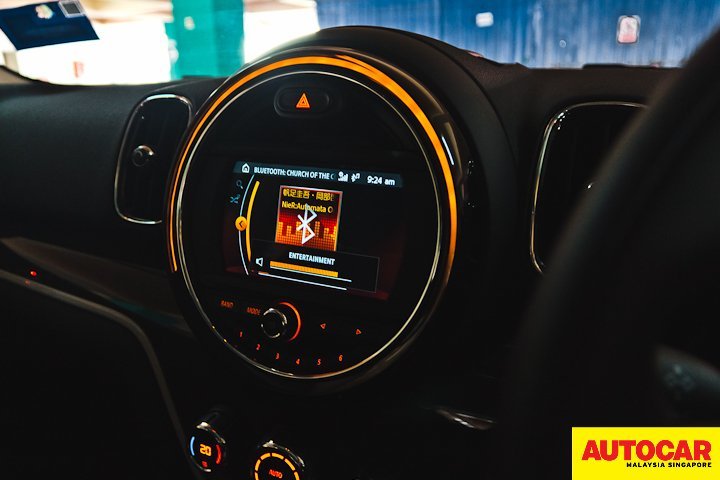 The Mini Connected infotainment system features a wide array of functions and features. It has six main features; Mini Connected, My Mini, Navigation, Notification, Communications and Media/Radio. There’s plenty to go through all of them, but this system is easy and straight forward to use, no fuss, no headaches. Especially when pairing your phone via Bluetooth. Better yet, the system pairs up with the Spotify on your smartphone displaying the album art of the track currently playing.

The Countryman Pure is compatible with the Mini Connected app available on the Apple App Store and Google Play. This app allows the away-from-vehicle status updates such as fuel level, remaining range and mileage, as well as Scheduling Assistant and Mini FindMate which help track forgotten tagged items left behind. The standard audio system performs better than expected. With four mid-range speaker in the front and rear doors and two subwoofers under the front seats, it may sound under-gunned but it’s an impressive performer despite the lack of speakers.

Tested with lossless FLAC files, sound reproduction is clear, crisp and faithful with plenty of punch from the subwoofers. Imagine being able to hear the slight ruffles of a piano player turning the pages of a score or the slight clicking and popping from the vocalist at the start of a verse, while able to handle the orchestral climax at max volume without falling short. Sitting pretty under the clamshell hood is a BMW B48 1,998 cc four-cylinder with direct-injection, a twin-scroll turbocharger and DOHC with Double VANOS. This one in the Pure version makes 192 hp at 5,000 – 6,000 rpm and 280 Nm of torque at 1,350 – 4,600 rpm. The Aisin sourced 8-speed automatic transmission which sends power to the front wheels. preventing both wheels from spinning at completely different speeds is thanks to the Electronic Differential Lock Control (EDLC) 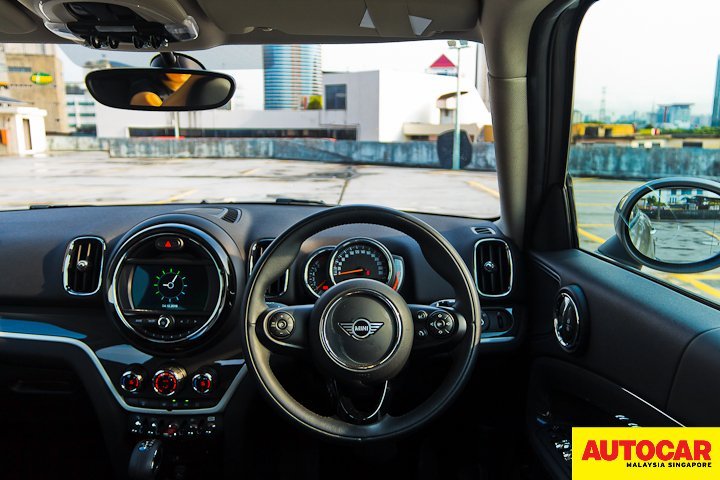 The Mini Cooper S Countryman Pure drives just as any other crossovers sold today, just with the additional refinement and isolation from the outside world, where wind noise and road noise are near imperceptible within legal driving speeds. The interior panels are together snuggly without any audible creaks or rattles. The engine’s low-end torque and closely spaced gear ratios drive the Countryman up to pace effortlessly without needing to squeeze the throttle much.

The springs and dampers allow agile driving without sacrificing much of the comfort and absorption of rough vibrations from the stiff runflat tyres. That said, the suspension is on the firm side of things, but they do well in keeping the vibrations away from the cabin space and does give a sense of speed. It has a sense of connectedness to the road which can be felt from the steering wheel without the harshness travelling into the wrists. *As tested. Fuel consumption can vary from person to person and depending on the type of journey and traffic conditions. The Mini Cooper S Countryman Pure also comes with engine auto start/stop function as standard.

No matter whichever way you drive, the Countryman provides a wide aperture ahead, while the curved windscreen and the toggle switches give a feeling of being in a propeller plane. It may seem novel, but in terms of usability, it’s hard to go wrong, because either way, pushing them up or down switches things on or off and doesn’t require much of a learning curve to understand. That said, many of the controls, dials and switches are accessible without your back ever leaving the perforated leather seat while driving. The original Mini has a low kerb weight, compact size and stiff go-kart-like suspension with minimal suspension travel, which results in agile handling and big-car slaying performance. The Countryman despite its size and its 1,460 kg kerb weight, it has some of the classic’s maxim. The Mini Cooper S Countryman Pure’s two-litre engine feels like it makes more power than on paper. There’s not much effort needed to get it up to its top speed, just leave it in ‘D’ and simply squeeze the throttle.

Pushing the gear selector lever to the left does two things; set the shift mode to Sport or by simply pushing it up or down engages Manual mode. The shift times may not be as lightning-quick in DSG gearboxes but it feels mechanically natural as to how a competent driver shifts on a traditional manual transmission. Personally, as an owner of a manual transmission car, the shift times feels uncanny. That said, the gearbox provides engine braking too. Introduce it to some corners and that’s when it rolls up its sleeves and goes around them like a competent hot hatch. The EDLC does its thing by sending power to the outside wheels relative to the direction of the turn, allowing the driver to drive with the throttle on. Left-foot braking is possible but needs getting used to due to the lack of brake pedal feel.

The steering is direct and has some weightiness to it, but lacks much of the feel due to it being electrically assisted. But not all is lost as there are little bits of the information steering wheel and the Countryman still has the seat-of-the-pants feel of the car is doing. The handling characteristic is go-kart-like but not in the literal sense. That said, it still puts a smile on your face regardless if you’re getting into performance-oriented driving or already nose-deep into it.

Should I own one? 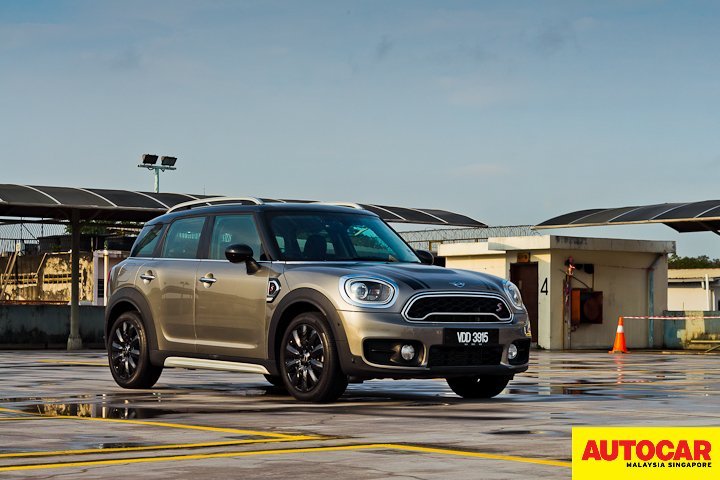 You can consider getting one as it’s the more affordable model of the bunch. But as mentioned throughout, the Mini Cooper S Countryman Pure has all of the goodies without compromising on refinement and quality. Sure, it has the smaller infotainment screen but doesn’t lack in the diverse features and usability of the Mini Connected system.

It is also worth mentioning that for a non-John Cooper Works model, the Mini Cooper S Countryman Pure is still able to put a smile on drivers faces with its agility and stability through corners with an adequate amount of performance suitable for daily driving an doesn’t intimidate young drivers. Besides that, it’s still very practical for daily use. Also, how often can you find a car that virtually winks at you?

Tester’s Note: The Mini Cooper S Countryman Pure is a base model that doesn’t skimp on the essentials and overall quality and value. We’re giving it 4.5 out of 5 stars.

Ferrari premiered the new FXX-K Evo at the Finali Mondiali. The FXX-K Evo will be available as a limited-run model as well as an upgrade package for existing XX cars. The cars developed since 2005 […]