Although based on the same platform as the nationally-branded sibling, the 2019 Toyota Rush is a different animal

Let’s makes things clear once and for all, these two are not the same things. Sure, they look alike visually, they have the same amount of seats, the same head and taillights, and the same powertrain. But after taking the range-topping 2019 Toyota Rush 1.5S to Kuala Kangsar and back, it’s evident that these compact crossovers aren’t exactly the same and this review sheds light on the matter.

Before assuming the “Can I Copy Your Homework?” meme works here, do understand that platform sharing is an almost compulsory thing in the industry. In fact, it’s done among premium brands to save development time and costs. The prime example of this is the collaboration between BMW and Toyota in developing the Z4 and the fifth-generation Supra. And this wasn’t the first time Toyota and Perodua shared platforms. The 2019 Toyota Rush 1.5S has a dynamic look to it, ready to go around the city (or town) while Queen’s Don’t Stop Me Now is blaring in the background. The Rush does look and feel, even could suit the outdoorsy individual who goes on hikes. It certainly looks aggressive with the frowning get-out-of-my-way full-LED headlamps in addition to the aero kit. The Rush’s look wouldn’t be complete without the 17-inch alloy wheels. At the back, it comes with LED tail and brake lamps at the rear. The reverse and signal indicators are the conventional bulb types.

When driving in the dark, in bad weather or both, the LED headlamps are bright enough to light the way ahead, while activating the high-beam (which is a dedicated LED lamp) provides additional reach. The halogen fog lamps to fill in the darker areas unlit by the LEDs.

The Interior of the Toyota Rush Now, this is where which sets the Rush apart from its identical twin. Right off the bat, you’ll begin to see, hear and feel where the extra money went. The interior feels much more upmarket and a higher perception of quality. The contrast between the cream and black plastics does hide the fact they are hard to the touch. But, it’s one that is livable with for a longer period of time, and knowing Toyota cars, they are less likely to degrade over time. Same goes for the door cards and they also feature soft-touch surfaces above the armrest.

For a person who is 1.68 metres tall, the front seats are accommodating while offering lumbar support bearable on long road trips. Both front occupants are able to adjust the seats manually, while the driver is able to adjust their height. The second-row seats can sit three abreast and fold 60:40 which passengers can recline and slide aft and fore to give more room for the two sitting on the third-row seats. The second-row seats can tumble and fold forward by pulling the seat lever forwards to allow access to rearmost seats. When it comes to driver comfort and ergonomics, the Toyota Rush sits the driver upright for a commanding view ahead. The steering column is only tilt adjustable, and as reviewed in the other SUV, I was able to find my comfy spot without any issues. Blind spots aren’t an issue as the driver is able to peek at the rear quarter windows in the rearview mirror and the wing mirrors are big enough.

The centre stack is easy to reach within arms reach of the 6.8-inch touchscreen and the automatic air conditioning interface. There are two rotary dials which feel good to the touch and provides good feedback. However, there’s no way in switching the airflow direction. 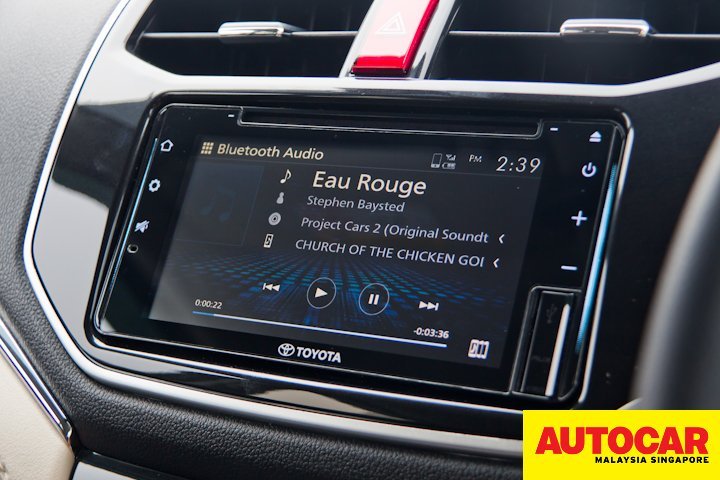 For added convenience, the Rush’s 360-degree cameras are able to relay images around the car, making it much easier to navigate into and out of parking spaces. This is thanks to the 6.8-inch touchscreen with DVD-AVX with USB mirroring, which stitches together the camera inputs around the vehicle to create a pseudo-birds-eye-view above the Rush. It’s surreal, but it does indeed help!

Sound reproduction comes from six speakers – two twitters on the A-pillars and four at the doors – which offers pretty decent sound quality to suit many genres. These include Jazz, Acoustic Indie and even Ah Beng Handphone Shop Techno on Spotify.

That said, the infotainment system is not very difficult to use as the interface provides clear graphics and simple menu designs. 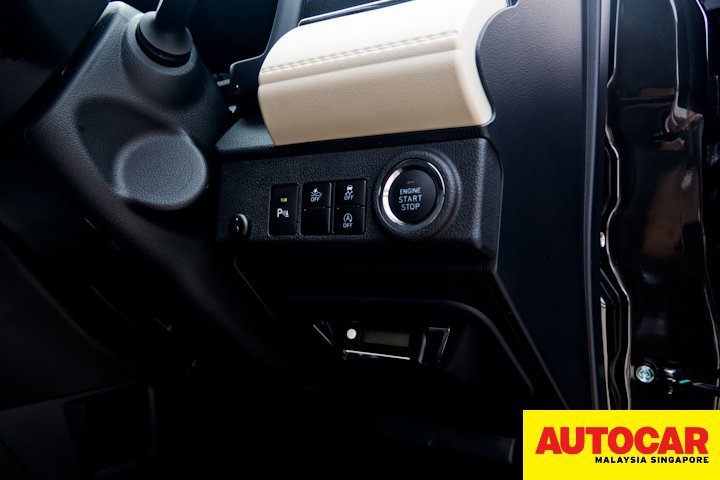 The Toyota Rush is a practical beast, featuring many helpful features like the 3Kg shopping hooks at the front seatbacks of the two front seats, the 3Kg Anti-snatch Hook the right flank of the passenger seat, and a USB port at the left flank of the driver’s seat. There are also 12V sockets available at the second and third-row seats.

The road-trip ability is further strengthened with deep cubbies on all four door cards, which the front occupants two drinks bottle on each side, two at the rear, and two more at the third row. This totals to 13 cup holders. In addition, the centre floor console can fit three drinks bottle when needed as well.

Standard is the built-in Auto Tag Smart Tag reader. Super handy when driving through Smart Tag lanes saving you much from buying 9V batteries as it runs from the Rush’s own power. Better yet, it’s illuminated when the headlights are switched on, so no more struggling to find out how much is left in the card when driving in the dark. The Rush also comes with a Digital Video Recorder (DVR) that only takes onboard footages ahead. 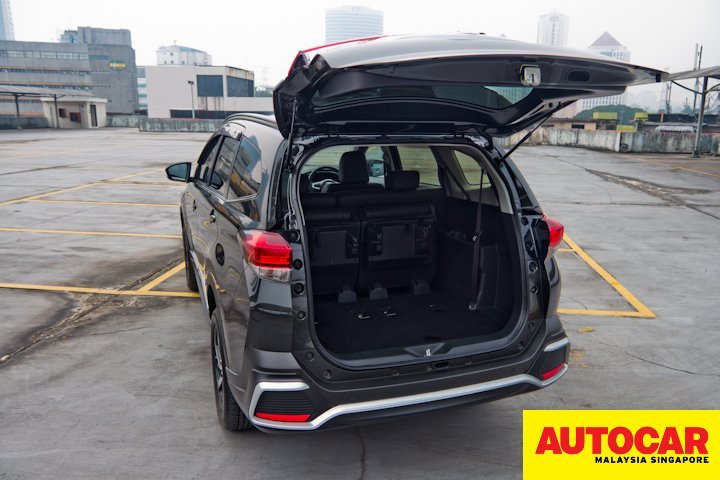 With the third-row seats up, the Toyota Rush’s luggage capacity stands at 213-litres, while after tucking them up frees up an additional 301-litres, up to 514-litres. The Rush also allows flexible seating configurations depending on the activity and needs of the day. The Rush is powered by Toyota’s 2NR-VE naturally-aspirated 1,496 cc four-cylinder engine with EFI and Dual VVT-I, which makes 103 hp at 6,000 rpm and 136 Nm of torque at 4,200 rpm. Mated to it is a four-speed conventional automatic gearbox which sends power to the rear wheels. The Auto Stop-Start system keeps auxiliary items such as the air conditioning and infotainment system switched on while the engine is switched off while the brake pedal is depressed.

UMW Toyota did not release any fuel economy figures. As tested in real-world situations the Rush is able to do*:

How does the Toyota Rush drive? 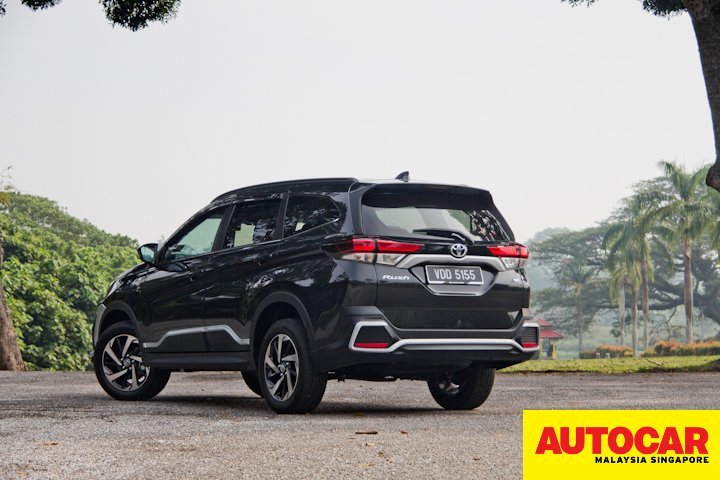 Driving wise, the Rush is quite an all-rounder; the 1.5-litre engine is able to drive the 1.3-tonne kerb weight around city streets and on highways without much effort. However, when it comes to driving up hills, the engine does require some persuasion to give it all. However, engine noise isn’t as intrusive as the other one which adds a pinch of refinement while cruising on the highway.

And being rear-wheel drive only, the Rush can go around tight with its 5.2-metre radius, which is again pretty impressive for a vehicle of this size. This is also thanks to the electrical power-assisted steering rack does make things light and easy when driving in tight parking spaces. 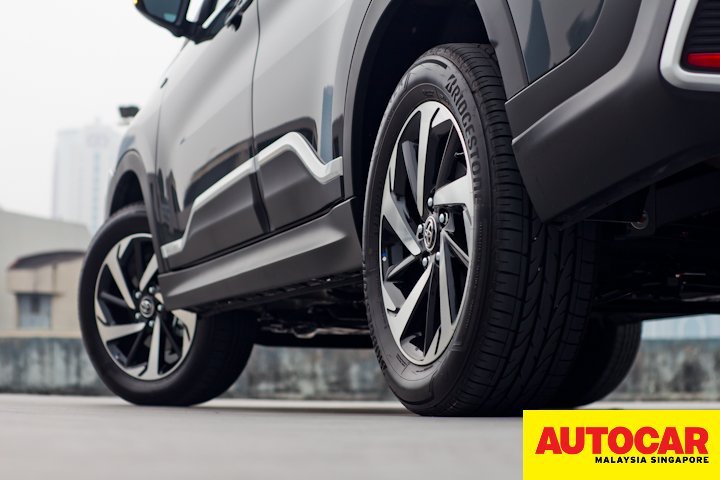 The one thing that the Rush can’t run away from is its chassis; the body-on-frame chassis is susceptible to torsional flex and less rigid than a pure monocoque design. And with the tall tyre sidewalls, handling response isn’t the Rush’s strongest asset. However, when there are times when spirited driving is needed, the Toyota Rush has a much better footing due to its much plusher suspension tuning.

The positive effect is that the flex does soak most vibrations away from the contents in the interior. In addition, the beefy 215/60 R17 Bridgestone Alenza road tyres all-round is a contributor to its plusher ride.

Suspending the Toyota Rush are MacPherson struts with coil-spring and stabiliser bar at the front, and a five-link coil-spring live axle suspension at the rear. These do provide compliance over uneven surfaces and decent ride comfort overall and rides better with more people or weight on board.

That said, it’ll won’t fall over and roll, no. The Rush handles weight transfers progressively without feeling overly precarious when turning into the apex for a vehicle with a high centre of gravity. It’s not made to carve corners, but when in times of need, the Toyota Rush is able to go around safely.

Although it has a tendency to understeer, the Toyota Rush 1.5S’ Vehicle Stability Control (VSC) & Traction Control (TRC) systems work in the background in real-time to keep it on the lane and making driving on the limit more forgivable for the driver. ABS and EBD keeps the wheels from locking in emergency braking. While the latter keeps the car from diving forwards upsetting its balance especially when braking hard into corners.

The Rush is well equipped in this department especially. It comes with Pre-Collision Warning, Pre-Collision Braking, Front Departure Alert and Pedal Misoperation Control. These systems do help the driver to mitigate impending frontal collisions. The Front Departure Alert to be very helpful especially when being distracted while being in the queue. Also, Hill-start Assist Control (HAC), Blind Spot Monitor (BSM) and Rear Cross-Traffic Alert (RCTA) are fitted as standard.

Although the Perodua Aruz is RM19,100 cheaper than the Toyota Rush 1.5S’ RM97,000, the difference can be felt when sitting inside both SUVs back to back. You will begin to notice that the latter has a higher refinement and more standard features than the former. The audio system is much better, and the ride is plusher as well.

It’s quite a tough choice to make if you ask me. But after ruminating over it for a while, think of it as either paying lesser instalments or have the higher resale value. Whatever you end up choosing, you’ll won’t go wrong as both SUVs offer great value in the long run.

Other than that, I can go on for years on the difference (and similarities) between both the Aruz and the Rush, but the one thing in common these SUVs have is that they are for people who cherish the company of people. Going on long road trips, taking their time and take the roads less travelled.

I’ve learned this after covering 1,240 km, finishing a tube of Pringles, drinking 10-litres worth of mineral water bottles, having the nicest chicken chop and the worst pizza outside of KL. Speed and performance is not everything in the Toyota Rush. But rather it’s strengthening the bond with loved ones and making new memories is what the Rush is really about.

Get RM11,500 when you buy a Volkswagen Passat