Armed forces veterans are behind a £2m-a-year road sign business. By John Evans

Listen hard enough and even a road sign has a story to tell. Like the one about Tirthraj Thapa, a rifleman in the Royal Gurkha Rifles who, in 2010, was on patrol in Afghanistan when he stood on an IED. It blew his left leg off.

He was immediately evacuated to Camp Bastion for emergency treatment from where, the following day, he was flown to a UK military hospital. He was in intensive care for three weeks. He was then moved to Headley Court, the military rehabilitation centre near Leatherhead in Surrey, where he remained for two years, recovering from his injuries and learning to walk using a prosthetic leg.

Eight years after he stepped on that roadside bomb, Tirthraj, 33, smiles as he describes his life today. Married with two children, he loves driving his car to visit friends and family and is a keen golfer. He doesn’t forget – “It was tough. I suffered terrible phantom pain” – but he has learned to manage the past and focus on the future, one made possible by, of all things, road signs.

Without my arm, I found life out of the army very hard

Along with more than 70 veterans of the armed forces, Tirthraj works in Royal British Legion Industries’ factory in Aylesford, Kent. He’s part of a team responsible for assembling many of the major road signs familiar to drivers in England and Wales
(a new factory serving Scotland is about to open near Glasgow).

RBLI is a national charity that helps former service personnel integrate. Each year alone, 900 wounded or injured servicemen and women leave the armed forces. Unfortunately, many find the door to employment closed. RBLI supports them with work and skills training and the results are impressive.

Thanks to the efforts of its workforce, 70% of whom have a physical or psychological disability, the company manufactures a range of products for the public and private sectors, turning over £5 million in the process. Some 40%, or £2m, of this comes from its road signs business, launched only six years ago.

“The new smart motorways have been good for us,” says Geoff Streetley, managing director of RBLI. “We supplied the M3 and we’ve just finished a massive job for Highways England on the M60. We’re currently bidding for the M4, M20, M23 and M27 projects.”

It must help RBLI’s pitch that in buying their road signs from the charity, contractors are satisfying a government requirement that public-funded projects deliver an element of social value. Streetley accepts RBLI has an advantage over rivals in this respect but insists that when the customer’s pen is poised over the contract, it’s the charity’s quality that seals the deal.

“People are buying our signs because they’re good,” he says. “Our customers, typically the gantry supplier who is answerable to the contractor who is answerable to Highways England, demands quality signs and quick installation to minimise disruption. They’re often assembling them at night. They have a few hours before the road reopens for the morning rush hour, so a mistake on our part can be expensive.”

Triangular warning and regulatory circular signs are RBLI’s biggest sellers but it’s the so-called advance directional signs that generate most income. Often found on the approach to junctions or slip roads, they are produced in smaller numbers but, crucially, are bespoke.

Bespoke but produced to standards RBLI and other sign makers ignore at their peril. They’re set out in a heavyweight tome called the Traffic Signs Regulations and General Directions 2016. A few pages in, the portentous dos and don’ts are interrupted by a short paragraph applauding the UK’s achievements in sign craft: “Great Britain is widely acknowledged to have one of the best traffic signing systems in the world. The signs, in use since 1964, have become instantly recognisable and a familiar part of our everyday lives. This has played a key role in creating our excellent road safety record compared to others around the world.”

Reflect on that the next time you’re following road signs to a place that, for reasons best known to the council, appear to stop, leaving you marooned and fuming…

As if reading my thoughts, Streetley rummages around for a road sign that might help and, having found it, holds it aloft. The lower half is a traditional white-on-brown sign – your typical ‘Welcome to Trumpton’ or some such – and officially known as a tourist gateway sign. The top half, however, is a full-colour composite photograph of the location. “Bath and North East Somerset have really taken to these,” he says, proudly.

Lenticular road signs are RBLI’s next Big Thing. Composed of multiple lenses, they show a different image or give the illusion of the image moving, depending on where the viewer is standing.

“It’s an exciting development but price will be key,” says Streetley.

While we’re talking, Colin Pavey, formerly of the Queen’s Regiment, 2nd Battalion, is hard at work in the RBLI’s metalwork department that is run by a veteran of the Sir Galahad, the logistics ship that was destroyed in the Falklands War. He’s cutting, shaping and riveting the large sheets of aluminium composite material – two pieces of aluminium separated by a polyurethane layer – onto which the road signs are applied. It would be strenuous work for anyone but it’s made more so for Colin, who lost his left arm more than 30 years ago. 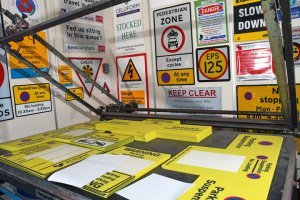 “I broke it in 10 places and the surgeon had to amputate,” he tells me later. “Without my arm, I found life out of the army very hard. Employers wouldn’t consider me. Fortunately, the RBLI stepped in and trained me as a welder and then gave me a job here. They turned my life around.”

Not for nothing does the RBLI call itself Britain’s Bravest Manufacturing Company. Road signs, we salute you. L

Established in 1919, Royal British Legion Industries, or RBLI, is an independent national charity that provides employment, training and support to members and veterans of the British armed forces, their families and their dependants. Here’s a snapshot of its road signs business:

♦ Slow down: demand for 20mph speed limit signs is rising.

♦ ACM: most of RBLI’s road signs are made from strong but lightweight aluminium composite material (ACM).

♦ Falkland Islands: its roads department is a regular RBLI customer.