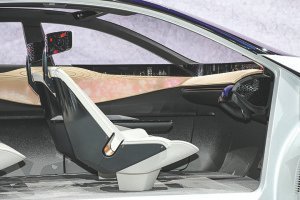 Nissan will launch the IMx as a full-electric SUV in about three years’ time, adding a second model to its electric vehicle (EV) line-up alongside the Leaf.

Senior vice president of Nissan design Alfonso Albaisa confirmed the electric SUV concept looks ahead to “within a few years” and described EVs in multiple segments as “the future”.

The IMx bears more than a passing resemblance to the IDS concept, which was shown at the 2015 Tokyo motor show and became the new-generation Leaf. The IMx concept will be turned into a production car before the end of 2021.

The production SUV is likely to have a simpler design than the IMx concept because Albaisa intends for Nissan to adopt the Japanese ‘Ma’ principle, which values the ‘mastery of empty space’.

Much can be inferred from the IDS’s transformation into the Leaf. Outwardly, the two concepts are strikingly similar, so when the IMx is turned into a production-ready Leaf-like SUV, it will feature more muted styling than the concept, with smaller wheels and a larger cabin. It will also have a different name, although Albaisa didn’t provide any clues as to what.

If the same 40kWh battery pack and 148bhp, 340lb ft powertrain as the Leaf is used, its range will drop from the Leaf’s 235 miles due to its extra weight.

However, by the time the electric SUV is launched, Nissan aims to have a more energy-dense battery pack in production, with an even more efficient, 373-mile-range one planned for 2022.

The IMx is around the same size as the Qashqai, which Nissan has ruled out converting into an EV.

Nissan is the latest car maker to consider the future of diesel powertrains in its model line-up as a result of tougher legislation and consumer backlash on diesels.

Nissan R&D boss Takao Asami (pictured) said that as more alternative powertrains come to the fore, Nissan “cannot keep developing too many channels of products. We already have petrol, diesel, hybrid, plug-in hybrid, electric vehicle. There are so many powertrains. Eventually, we need to have some priorities.”

Asami acknowledged that diesels are a better fit in some markets and that there is still progress to be made in maximising the efficiency of internal-combustion engines but suggested diesel may be the prime candidate to be phased out in years to come.

He would not be pushed on how long it might take for diesel to be axed, however.

Asami’s comments came as Toyota’s executive vice president, Didier Leroy, said that “in my personal opinion, [Toyota] will not launch another diesel car”.