The Alfa Romeo Stelvio promises to be a proper driver’s SUV, especially with the deep reserves of the 503bhp Quadrifoglio. But can it defeat the hottest Porsche Macan, our class champ? Richard Lane reveals all

Fifteen years ago, we’d have stood on a Welsh hillside waiting to compare two low-slung cars of purely sporting pretensions. Today, it’s sports utility vehicles that need to tick numerous ownership boxes beyond merely that of being a decent steer. How times have changed, eh? And yet the fact that we’re here shows change is still upon us – and for the better. We’ve sought worthy Tarmac for this test because we know these particular beasts of high-riding automotive leisure can deliver an unusual level of driving pleasure. The question is: which does it better?

Our subjects are the Porsche Macan Turbo Performance Package – current class leader – and Alfa Romeo’s new Stelvio Quadrifoglio. The same purists who rejoiced at the return of a seriously potent rear-driven Alfa saloon in the form of the Giulia Quadrifoglio must have serious misgivings about the existence of this car, but even they have to admit that encouraging similarities exist. The platform – designated ‘Giorgio’ and the fruit of a billion-euro investment – is common to both and was always destined to underpin an Alfa Romeo SUV. Crucially, the 2.9-litre twin-turbo V6 engine, whose roots are easily traceable to Ferrari’s F154 V8, is also identical. Maranello’s influence on this unusual car doesn’t end there, either.

You may remember Philippe Krief. He is the ex-Ferrari engineer who led the stellar chassis work on the 458 Speciale and is largely responsible for the fact that a Giulia Quadrifoglio will out-handle BMW’s M3 Competition Pack. Krief has overseen the transition to four-wheel drive and centre of gravity somewhat higher than he no doubt would like, but his continued involvement in Alfa’s resurgence bodes well.

Tack the price of a London pint onto the Stelvio’s £69,500 list price and you could put the Macan on your drive instead. It would have the Performance Package, too, which turns up the wick on the 3.6-litre twin-turbo V6 and drops the ride height 15mm if you stick with the standard springs or 10mm with the air springs on our car here today. As with the Stelvio, its platform is not entirely its own, being related to that of the first-generation Audi Q5, with which it shares its multi-link suspension. The manner in which these two allocate their power differs subtly but significantly, and despite their similarities on the spec sheet, I suspect they’ll attract different sorts of people. There’s plenty of nuance here.

All of which is thrust firmly to the back of my mind when I arrive in the Porsche at our meeting point above Crickhowell. Picture editor Ben Summerell-Youde is waiting with the Alfa, which, painted in a faintly pearlescent shade of white, blends in around these parts like a Burger King outlet on the set of La Dolce Vita. Judging by the heat haze over the triple-slatted bonnet vents, somebody enjoyed the journey over too. It has vast presence, this Stelvio Quadrifoglio, simultaneously appearing curvaceous and hard-edged. The jutting wheel-arch extensions could be considered crude on something costing half the asking price, and you’ll find a less gaping expanse of fresh air above the tyre tread of Séb Ogier’s Ford Fiesta WRC car.

Sitting next to its Italian foe, the Porsche, even shod in 21in wheels shrouding yellow calipers that denote the use of optional carbon-ceramic brake discs, comes across as just another bit of the local geology. It is handsome for its type, with a pebble-like neatness to the bodywork and a low-squatting stance that suggests its handling might be closer to what you’d expect in a hot hatch than an SUV. It lacks the attitude to evoke a double take, though, and although that will be a large part of the appeal for many, it manifests as a lack of character in this instance.

What the Macan doesn’t lack is credibility. The first few hundred yards in the hot seat are a reminder that, whatever controversial form its cars might sometimes take, Porsche has been building drivers’ machines in an unbroken run that stretches back almost to World War II. The fact that you sit unusually high above the car’s shoulder line is misleading because the Macan actually places its driver remarkably low, with legs outstretched. There is, of course,the central rev counter common to all the marque’s cars, and although the ambience is rather more corporate than in the Alfa, it’s also tremendously upmarket in feel, with elegant touches such as cut-outs on the steering wheel spokes that reveal sinewy gearshift paddles.

Alfa’s designers will tell you there’s simply too much switchgear in the Porsche, particularly along the transmission tunnel. The Stelvio Quadrifoglio faithfully recreates the driving environment of the Giulia, and it immediately feels the more focused but flamboyant. Where the Porsche calmly states ‘luxury conveyance’, the Alfa more insistently hisses ‘performance car’, not least with a bright red starter button mounted on a thin-rimmed steering wheel of carbonfibre, leather and Alcantara. That’s very Ferrari, as are the sabre-like aluminium paddles that zing when tickled with the fingernails. Sizeable fillets of glossy carbonfibre – the sort German manufacturers loved at around the turn of the millennium but still find favour in Italy – line the dashboard and door cards. The material is all over the transmission tunnel, too, which is home to just three dials, two buttons and the gearlever.

It’s pared back in the Alfa, but also dark and perhaps a little claustrophobic compared with the Macan. There is also evidence that Alfa has yet to raise its standards of fit and finish to match the best in class. An early left-hand-drive example this might be, but the upper dashboard trim doesn’t quite align equally where it meets each door and a thump of the panels doesn’t elicit the same reassuringly singular frequency as it does in the Porsche. Still, the Alfa is rather more interesting and congenial. The green and white stitching is particularly welcome.

Out on the road, these two are chalk and cheese. Owing to the fact that its maker was spooked by recent heavy snow, the Stelvio is riding on Pirelli winter tyres. The Porsche remains on summer-spec P Zeros and therefore holds a distinct advantage on a mild day like today. The Macan Turbo is devastatingly quick, too, and not just in a straight line, where its 434bhp and 443lb ft from a lowly 1500rpm make admirably short work of its two-tonne mass, but through corners of almost any profile. Thus far, no other SUV has so closely replicated the experience of driving a focused hot hatch.

But perhaps the Porsche mimics the hatchback modus operandi too well. Its balance is admirable but this chassis’ first instinct when the limits of adhesion are breached is to understeer stubbornly. I’m certain the optional air springs are of little help in this respect because, although they might endow the Macan with almost supernatural body control (not to mention amplified off-road ability by raising the ride height further), they lack the pliancy of a conventional set-up. The result is a leading axle that is faithful and true but can become brittle when you’re really in the mood. It’s endlessly sure-footed, yes, and thus satisfying to plot along a road at pace, but never does the Porsche feel usefully adjustable. Tellingly, it is never entirely rear driven, either, and defaults to a split closer to 50/50 with even moderate use of the throttle.

Here, the Stelvio strikes first blood – palpably. When we convened this morning, those yawning wheel-arch cavities had me fearful of loose body control, but those fears were unfounded. The ride can be a little rough around town but with speed the Alfa’s vertical control becomes a lesson in how it’s done. With the cab-rear body behaving itself, the Stelvio’s light but unusually quick steering rack (another Ferrari-ism) emboldens you to drive in a wrist-flicking style and lean heavily on the rear axle. The way this car allows you to chase the throttle and indulge in a quarter turn of opposite lock seemingly without jeopardy is a surprise and delight. SUVs haven’t done this until now, and Alfa should be applauded for setting the car up with a useful degree of body roll.

There’s an ever so slight sense of float and some remoteness at times, although I’d be surprised if that weren’t adequately remedied by a set of Pirelli P Zeros. Simply, of the two cars here, it’s the Stelvio that offers the more interactive, intuitive experience and this chassis is good enough to communicate that the engine’s efforts are directed to the rear axle alone until any slip is detected. At that point, up to half the torque is directed to the front. Torque vectoring (something our Porsche similarly features, although optionally) that meters out drive via a clutch either side of the electronic rear differential is also unobtrusively calibrated.

The sheer pace of the Quadrifoglio takes some getting used to, too. The official 0-62mph claim is 3.8sec to the Porsche’s 4.4sec. It’s an absurd figure, and although the Alfa is the marginally more closely geared of the two and nearly 200kg lighter, its capacity for leaving something as quick as the Macan almost for dead on these roads is nevertheless staggering. You’ll need to engage Race mode to get the best out of this 503bhp twin-turbo V6. It sharpens the throttle response and ups the vocal ante to glorious levels. It also disables the stability control, but so benign and malleable is this chassis that you always feel in total control.

If the battle of engine and chassis is won by the newcomer, it is Porsche that has delivered the better brakes and gearbox. Both cars use a dual-clutch transmission (eight speeds for the Stelvio, seven for the Macan), and although the process of swapping cogs is sumptuously smooth whichever car you’re in, they’re whipcrack fast in the Macan. That car’s brakes also bite higher and more cleanly and inspire greater confidence through their firmer action. Were you only able to lean more committedly on the Porsche’s front axle as you can in the Alfa…

This, then, is an unusually tight contest, and the five-hour schlep back to London via the Cotswolds has the Macan working its magic to persuasive effect. Between blistering B-road stints, where it splices apices dependably and with an enjoyable enthusiasm, it is snug, quiet, wonderfully undemanding and simply a pleasure to operate. It’s tempting to give it the victory here and now. And yet my mind is still on those Welsh hillsides in an eccentric, rip-snorting Alfa Romeo that has a chassis that rewards like no other in this class. Keen drivers with their heart set on an SUV should look first to the Stelvio Quadrifoglio. A 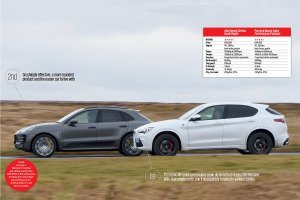