No area of car design has advanced more than this in the past 90 years, and it’s easy to see why. While the internal combustion engine was a child of the late 19th century, the leaf-sprung ladder chassis used by almost all cars in 1928 differed little in concept from that used by wagons dating back to the mid-18th century. Yet so little was known about chassis design that even in the mid-1930s the Mercedes-Benz racing team was shocked to learn that the primary springing medium of its state-of-the-art W25 grand prix car was not its suspension but flex in its chassis.

There had been cars with what we would recognise as modern unitary construction before the war – notably the 1922 Lancia Lambda – and the Americans were far ahead of most of Europe in this regard during the 1930s. But it wasn’t until the 1950s that this stiff, light, space-efficient form of chassis became common, alongside the spaceframe construction that was simpler for low-volume manufacturing.

This was also the time when most manufacturers replaced their leaf springs with coils and designed truly independent suspension, at the front at least. Independent rear suspension took far longer, with designers preferring to mitigate the worst effects of non-independent rear axles with devices such as the Panhard rod, Watt’s linkage and De Dion tube. To this day, almost all small hatchbacks, and an increasing number of family hatchbacks, feature non-independent torsion beam rear axles because they are cheap and easy to package.

Four-wheel drive halved the workload of each tyre

But if we’re looking for landmarks, there was none more striking than the Lamborghini Miura that dropped jaws at the 1966 Geneva show, thanks to an engine mounted neither in the front nor at the rear, like many small cars of the era and all Porsches. Mid-engined design was nothing new in racing circles, but centralising the car’s major mass in a road car was something else (even though, like so many developments we think of as pioneers in their field, it wasn’t actually the first mid-engined road car – take a bow the Matra Djet).

The Miura’s configuration was not without issues, notably the low polar moment of inertia that resulted and what then happened once the car started to slide, but the benefits in grip, response and steering could not be ignored. Two years later, Ferrari introduced its Dino and proved that, with a bit more thought and a bit less mass, a mid-engined car could be the sweetest-handling device imaginable.

But even if by the 1970s manufacturers had (largely) sorted out suspension and construction, cars were still being prevented from realising their true potential in the most fundamental way: simply put, those four little patches of rubber that connected them to the road simply weren’t fit for purpose.

True, tyre technology hadn’t stood still since the 1920s and Michelin’s successful introduction of the radial tyre as standard equipment on, of all things, the 1948 Citroën 2CV was a huge step forward, providing as it did a more stable footprint while actually improving ride quality. But even by the mid-1970s, Ferraris still sat on tyres whose dimensions would look wholly inadequate on the most modest hot hatch today. The 308GTB, for instance, was fitted as standard with a 205/70-section tyre. But then Pirelli introduced its new P7 and almost overnight everything changed. First made available on the Porsche 911 Turbo with a 225/50 rear boot, soon Lamborghinis and others were parading around wearing 345/35 section rubber. These ultra-wide, ultra-low-profile tyres were the key to unlocking the performance of the world’s fastest cars, because not only did they transform apex speed but their effect on traction and braking was also no less remarkable.

True landmarks in chassis development have been rarer since, although we should namecheck the 1980 Audi Quattro as the first car to use four-wheel drive for sporting purposes: not only did it halve the workload of each tyre when accelerating but it also allowed hitherto front-wheel-drive platforms to transmit monster amounts of torque without the trademark tugging at the steering wheel.

Carbonfibre tubs still aren’t commonplace but they have been around since the 1994 McLaren F1 (or the 1990 Jaguar XJR-15, if you choose to count that road-going racing car). Such tubs not only keep weight down and massively improve crash performance (the F1 reputedly drove away from its own crash test) but, crucially, they also provide a level of torsional stiffness that cannot be achieved by conventional means.

Probably the single biggest growth area in recent years for more mainstream cars has been the influence of electronics, from the fitment of simple adaptive damping, past active roll control to an entire suite of stability systems whose acronyms and initialisms when spelled out are often longer than the car’s name. These systems enable chassis engineers to set up cars to be far more responsive than would ever be prudent were supercars still reliant on the driver alone to keep them pointing in the right direction.

As for the future, it’s interesting to note that tyres are still advancing at an incredible rate and represent a sizeable chunk of the reason that standard road cars now possess the lap speed of the much-vaunted hypercars of five years ago. But the real growth area, particularly among sporting cars, will be downforce. So long as it can be achieved without an enormous drag penalty, downforce is the gift that keeps on giving. It requires few moving parts and the faster you go the easier it makes the car to drive. So do I think we’ll see conventional sports cars sprouting enormous wings? I do not, but more downforce can be achieved under the car than over it, and it is from there I expect the bulk of progress to come. 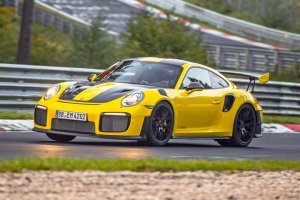 Although power comes into it, perhaps the best guide to how chassis performance has evolved remains the Nürburgring lap time. So let’s see how the Porsche 911, the world’s most enduring sports car, has evolved this century – bearing in mind that different drivers, conditions and timing methods make this a very approximate science from which only a general trend can be extrapolated.

It’s staggering, then, to think the current GT3 RS’s 6min 56sec is more than 20 seconds faster with 100 fewer horsepower, and quicker even than the 918 hypercar managed in 2013 with an extra 360bhp. But perhaps not quite as incredible is the fact that the current GT2 RS, the fastest 911 yet driven around the ’Ring, posted a time of 6min 47sec, which would have placed it seventh on the grid for the last 1000km race held there in 1983, quicker than some pure racing prototypes with full ground effect bodywork and enormous slick tyres.