To mark seven decades of Porsche, Andrew Frankel picks his best of a celestial breed

The first Porsche was built in 1948 in a collection of sheds on the site of a former sawmill in a place called Gmund, in Austria. Its designer had recently been released from prison where he had been interned by the Allies. The car had more than a passing resemblance to the Volkswagen Beetle – and with good reason, for the same man had designed both. He was called Ferdinand Porsche. All its moving parts – engine, brakes, suspension and steering – were either lifted directly or derived from Beetle running gear and despite the engine being given a fairly monumental tuning upgrade, the 1.1-litre flat four still only generated, wait for it, 40bhp.

It is fair to say Porsche has come some distance in the past 70 years. During that time the car maker has become the most profitable on earth, and its sphere of operation is now so wide that it makes everything from hypercars to SUVs. It has won in Formula 1 and amassed an unrivalled 19 victories at Le Mans. Today those SUVs are the most coveted cars of their kind, yet Porsche has not forgotten its roots: it still makes a flat four open two-seater with its engine located behind the driver, just like that first 356 all those years ago. So to celebrate we thought we’d look at some of the very greatest (and just a few of the not so great) cars that brought Porsche from some huts in Austria to becoming the most successful manufacturer of sporting cars the world has yet known. 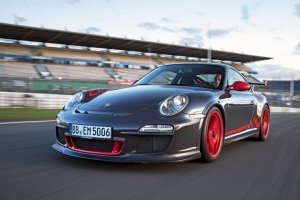 I wasn’t going to miss a GT car out but the choice is hard. Many are excluded on grounds of age, but why not a modern one? I think the 2017 GT2 RS is one of the most incredible devices of any kind I have driven. Or what about the Cayman GT4, perhaps the sweetest natured of all its brethren? But I can choose but one, and the second generation 997 GT3 RS is it.
It provides the perfect synthesis of involvement, entertainment and speed while remaining sufficiently quiet and comfortable to fit the 911’s original brief of being civilised enough to use every day. It has the loveliest gearbox ever fitted to a 911 and, in its 450bhp flat six with its Le Mans-winning heritage, a perfect pedigree under the engine cover. It’s a car you want to drive everywhere and whenever you can. And if all that doesn’t make a great Porsche, I have no idea what does. 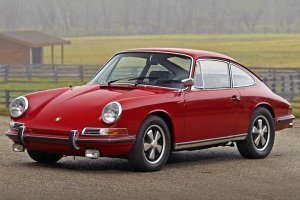 It has to be a 911, but which one? The 1963 original, the car that was meant to be called the 901 until Peugeot got shirty and asserted its rights to triple-digit car names with a zero in the middle?
Or maybe the 1967 911R, the first factory-built racing 911, to date still the lightest 911 and the car that won the 84-hour 1967 Marathon de la Route at the Nürburgring?
I’m going for a standard 911S of 1966, the most highly developed road-going 911 until they stretched its wheelbase in 1968 to try to calm its handling. This car holds the very essence of the 911 spirit: small, light, compact and quick, its little 2.0-litre flat six making an impressive 160bhp which, combined with ridiculous agility, made it far faster point to point than almost anything on the road.
Yes, it could be tricky if you didn’t apply the old ‘slow in, fast out’ rule, but everything about this car, from its hyperactive steering to its one-of-a-kind gearbox, is designed to keep you busy.
To me, it’s what a 911 should be all about. 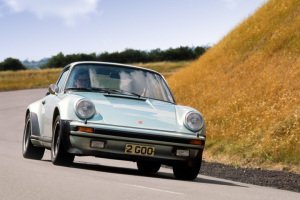 I’m going to get into trouble for this. Firstly, because I didn’t choose the iconic 911 2.7 Carrera RS of 1973, and second, because while the early 911 Turbo was a great car, it wasn’t necessarily that good. And you’ll never know how close I came to choosing the 928 (which would have been an act of the purest heresy among the rear-engined, air-cooled Porsche-bore aficionados).
I chose the Turbo not because it was the first production car to use this means of forced induction (it wasn’t), nor because it was incredibly quick (Boxers and Countachs were quicker), nor because I love the looks (although I do), with those dramatically flared arches and that enormous tail spoiler designed to cool the motor as much as keep the rear end on the deck. No, I chose it because it was born for the purest of reasons – racing – and because, unlike the BMW 2002 Turbo launched at the same time, Porsche stuck with it and turned it into a game-changer. Besides, this story wouldn’t be complete without a tricky 911 in the cast.
And the early Turbo could be properly tricky.
It had enormous turbo lag and so much rear grip it understeered everywhere until you did something desperate with the brakes, at which point the back would go in an instant and usually stay gone. It made a worse noise than a 911 and had fewer gears because, said Porsche, it didn’t need five, although the fact that the internals needed such strengthening that there wasn’t room for more than four probably had rather more to do with it.
But it contained technology invented for the 1100bhp Porsche 917/30 and would in time turn into the Le Mans-winning 935, one of the maddest racers ever made. It also began a tradition of 911 Turbos, one of the finest in Porsche’s pantheon. 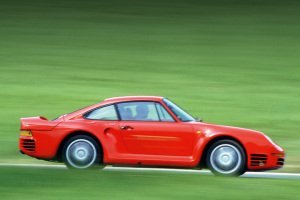 I would argue that the 959 was the first hypercar. It was a car not only faster than anything else to wear a number plate but also one whose speed was achieved through technology so sophisticated that it made the next-best effort look like something cobbled together by Hagar the Horrible. The fastest Ferraris and Lamborghinis subjected to independent testing ran out of puff in the mid-180s bracket. The 959 did 197mph.
It might have looked like a melted 911 but only its roof, glass and doors were carried over. The rest was crafted from Kevlar, Nomex and aluminium. Its shape generated no lift, a unique achievement at the time, while its engine was derived from a
Le Mans winner, with an air-cooled block but water-cooled heads and sequential turbocharging. It had a six-speed gearbox, double-wishbone suspension, ABS, adjustable dampers, four-wheel drive with a variable front-to-rear torque split, bespoke tyres and driver-selectable terrain control. Thirty years ago, it was science fiction made fact.
The result was not just a great Porsche but also one of the greatest and most important high-performance road cars in history. Within that stunning shape lie lessons that continue to inform the industry to this day. 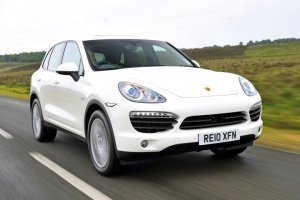 Now this really is sacrilegious. I only have seven Porsches and I go and choose this hideous SUV with no more in common with the svelte grace of the cars on which Porsche built its reputation than do I with Audrey Hepburn. Allow me to explain myself.
I think we can agree that the Cayenne was an important car. It is well known that Porsche was nearly bankrupt in the mid 1990s, and while the Boxster and 996-generation 911 steadied the ship, it was the Cayenne that steered it towards the enormous profitability the company enjoys today. Soon after it went on sale, it was outselling all other Porsches combined. But even that’s not really why it’s here. I chose it because of all the other wonderful Porsches – the hot 911s, Caymans and Boxsters – that would never have been built without the profit that it and its Macan offspring returned to Stuttgart. Make no mistake, without this blunderbuss of an off-roader, without such a blatant diversion from the comparatively compact, lightweight, simple and sporting path of all previous Porsches, all the compact, lightweight, simple and sporting models that followed it would either have been far less good or simply not existed at all. Love a good GT3? You have the Cayenne to thank for it. 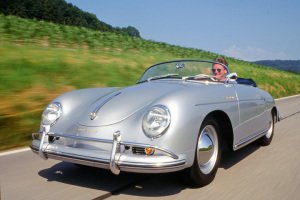 Six years into the story of Porsche and the little company was growing fast. Its success was built on the reputation of Ferdinand Porsche as one of Europe’s pre-eminent automotive engineers, and the vision of his son, Ferry, who saw a clear gap in the market for a super-high-quality sporting car that could be used not merely as recreation but as daily transport, too. The essential rightness of that idea can be seen in the fact that much the same thing can be said about a 2018 911.
But Porsches were expensive– too expensive for some tastes in the largest market of all on the other side of the Atlantic. Why buy a Porsche with a small pushrod four-cylinder engine when you could buy a Jaguar with a twin-cam six of over double the capacity and which came complete with Le Mans-winning pedigree?
But it wasn’t Porsche who spotted the need for something more affordable that would also add some spice to the Porsche proposition, and it wasn’t Porsche that came up with the solution. It was a chap called Max Hoffman, who imported Porsches into the US (he also persuaded Mercedes-Benz to create the 300SL ‘Gullwing’ and inadvertently invented the supercar). Hoffman convinced Porsche that a stripped-out, lightweight, more affordable 356 would not only sell in its own right but also, by taking advantage of the burgeoning club racing scene, sprinkle some much-needed stardust on Porsche as a whole.
The fact that a certain James Dean owned and raced one probably helped, too.
So the 356 Speedster, with its steeply raked and detachable windscreen, was born. It was Porsche’s fastest road car to date and the best to drive. But it also looked incredible and Hoffman had to beg Stuttgart to send him more. A flame had been lit, and in cars like the 911 GT3 RS, it burns to this day. 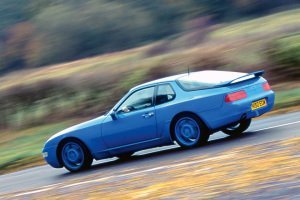 Got to have something with an engine in its nose? Then what better than this? Actually its philosophy was similar to that of the 356 Speedster from 40 years earlier: in short, to save a little money by losing some equipment. The result is not just cheaper but also lighter and better to drive.
So good to drive, in fact, that I’ve always suspected the ClubSport (or Clubbie as it was known at Autocar) to be one of those happy cars that turned out to be even more enjoyable than its creators intended. Few cars have ever been so poorly described by specification sheet alone. And quick though it was, it was never really that quick, and nor did it need to be. When I think of it, it is not words like power, grip and pace that come to mind, but ones rather more descriptively enticing, like poise, feel and balance. This was a supremely tactile car with a genius for inspiring love in everyone from novices to professional drivers.
It was also the last normally aspirated four-cylinder car that Porsche would make.