With the all-new Ford Focus poised to hit the UK, Mike Duff takes one on a 600-mile dawn-til-dusk drive over some of the finest roads in Britain

We’ve been here before. Not here here – sitting in the shadow of the Forth Railway Bridge at 4:30am – but rather in a brand-new Ford facing an unlikely challenge. From a round-Europe trip in the first Mondeo to 12,000 miles in a week in the original Focus, without ever leaving the warm embrace of the M25 motorway.

For the all-new fourth-generation Focus, we’re aiming for a distilled adventure: shorter but just as tough. We’ve set one of the first examples of the new Focus to arrive in the UK the simple mission of visiting the maximum number of our favourite driving roads in just once day. Hence Edinburgh and a not quite dawn start.

WE DRIVE AT DAWN
The chosen Focus is an appropriately mid-range example. This is meant to be a test of a representative model rather than a performance outlier. Titanium X trim and a moderate options workout bring plenty of kit, but the 1.0-litre three-cylinder Ecoboost engine in its 123bhp state of tune represents what Ford reckons will be the most popular powerplant in the UK. It also means that our car uses a torsion beam rear axle in place of the more advanced multi-link system that’s now reserved for brawnier versions.

South Queensferry gives us not only the photographic backdrop of first light breaking behind the cantilevered magnificence of the Forth Bridge – which sits in splendid isolation from the two road crossings upstream of it – but also fast access to some of the brilliant roads that run through the Borders.

The whiff of hard-working brakes is obvious in the cabin

Because although Scotland has plenty of epic Tarmac, possibly more per capita than anywhere else in the world, none of the better-known roads north or west of our starting point can offer a more varied challenge than the A701 that spears south-west from the Edinburgh suburbs and encounters pretty much nothing but scenery and contour lines before reaching the town of Moffat nearly 50 miles away. The northern stretch is fast and flowing with well-sighted straights, the middle gets bumpier and more demanding and the final section does a good impression of an Alpine pass as the road skirts a natural bowl in the hills with the unimprovable name of the Devil’s Beef Tub.

Starting before the sparrows have cracked means we also have the A701 pretty much to ourselves. It’s soon obvious that, as in its previous applications, the three-pot Ecoboost’s defining characteristic is mid-range brawn rather than any marked enthusiasm to explore the red bits of the rev counter. There’s more than enough urge for rapid, inconspicuous progress, but it’s definitely no hot hatch. The chassis is already impressing, though, with a well-damped compliance that barely notices the weather-worn state of much of the road and with the steering yielding commendably quick responses.

FIRST MOTORWAY
The A701 stays good past Moffat – both racing driver Allan McNish and Jaguar design director Ian Callum have cited it as a favourite road – but we head south on the M74. The idea is to let the motorway network join the dots today. Higher speeds produce a couple of niggles: heading into the second hour, the Focus’s seats are already starting to feel short of upper-thigh support; and there’s some wind whistle from the top of the driver’s door, but the lack of any from the passenger side suggests it is just an ill-fitting seal.

Even on a smooth motorway, the suspension never quite settles down, the base of my spine registering a very slight shimmy at a constant-speed cruise. It’s tiny but, like a dripping tap, hard to ignore once noticed. I suspect it’s something the more advanced multi-blade axle of the more powerful versions might well cure. 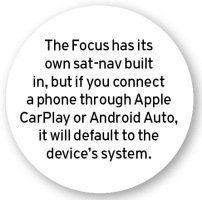 Having crossed into England, we turn on to the A689 at Carlisle. The first few miles are filled with trucks, but these all turn towards the A69 and Newcastle upon Tyne at Brampton, which leaves us on another near-empty back road. Next destination: Alston. No fewer than five A and B-roads meet in this Cumbrian market town and, from previous experience, they’re all belters. But we take the best-known, the A686 Hartside Pass towards Penrith. On sunny weekends, it’s hugely popular with bikers, although few are in evidence on a damp Monday morning. The famous Hartside Café at the summit burned down earlier this year, but the good news is that it is going to be rebuilt and – until then – a temporary catering van in the car park is doing brisk business.

The twisting descent gives a good chance to harvest some more dynamic impressions. Previous generations of the Focus have always driven more expensively than their price points suggest they should, and the new one keeps with the tradition. The 17in Michelin Primacy tyres don’t find much bite on damp Tarmac and the slower turns reveal a fair amount of roll on the softish suspension settings, but the steering remains spot on, with responses nicely balanced between both axles. The damping is exceptional, doing an outstanding job of keeping the body’s mass under control over bumps and compressions. By the bottom of the hill, the unmistakable whiff of hard-working friction materials is obvious in the cabin, although the brakes still feel fine. Beyond the question over cruising refinement, I’m facing the conclusion that Ford can make a beam axle perform better than most manufacturers can manage with a multi-link rear end.

The shortcut over the mountain backfires, taking us into a half-hour queue

TWIN PEEK
Back on the motorway and there’s an unlikely Vanishing Point moment. The eagle eyes of photographer Olgun Kordal spot what seems to be an identical Mk4 Focus heading in the other direction, a remarkable coincidence for a car that’s not on sale for several more weeks. Progress slows as we reach Preston, with frequent roadworks bringing patches of congestion all the way to where we turn on to the M56. It’s a chance to test the radar cruise control – which allows gearchanges without tripping out – and to explore the deeper reaches of the Sync3 infotainment system through its crisply rendered touchscreen interface.

North Wales turns out to be a big, fat bust. A carefully plotted route to join up some of Snowdonia’s finest roads falls victim to miserable weather. Rain on the A55 grows heavier as we turn towards the mountains, and after Denbigh, the Focus is climbing into low cloud. On a good day, the A543 to Pentrefoelas can lay claim to be one of Europe’s finest driving roads, but with visibility below 50m, there’s nothing to do but trundle through the fug at a cautious pace, frustrated by how much scenery is hiding out there behind the greyness.

No matter: you’re never far from a good road in Wales and opting for a cross-country route rather than the fastest possible journey to Newport brings plenty. By the time the navigation slots us on the B4518 and takes us past the spectacular Clywedog Reservoir, the weather has changed to bright sunshine. Despite the hottest summer on record, the water level seems to have barely gone down. This is where the much-copied ‘Dambusters’ TV advert of a Land Rover Defender winching its way up the dam was filmed in 1986.

The afternoon disappears in the strange time warp of mid-Wales, a place where journeys take hours without feeling it. The respectable pace of most local traffic means that the Focus’s shortage of overtaking punch isn’t an issue. Although the engine pulls strongly on turbo boost, a hesitancy when asked to deliver full acceleration at short notice limits confidence in opportunist passing moves. Long stretches of relaxed cruising give the chance for under-utilised fingers to explore the cabin. There are some scratchy plastics in hard-to-reach places, but pretty much everything a driver might frequently touch feels a fair distance upmarket of the cabin of the Mk3 Focus. After 400 miles I’m also starting to like the six-speed gearbox more. The selector doesn’t have the hand-filling mass of the last Focus’s and the shift action has what feels like a longer throw, but it’s smooth under gentle use and effortlessly fast when it needs to be.

Crickhowell brings a small diversion to the B4560, probably the most photographed piece of road in the country. With the neat compression of everything required for a car shoot in no more than five miles, it has become a favoured spot for road testing, although in the early evening, it seems far busier than usual. Nobody in the crowded car park on top of the hill bats an eyelid at the presence of an all-new Focus. Indeed, during our entire time together, the car didn’t seem to be recognised as something different at all.

The shortcut over the mountain also backfires, taking us into what turns out to be a half-hour queue caused by big roadworks on the A45 Heads of the Valley road. With just a couple of hours of sunlight left, the odds of getting to our final destination – the depths of Exmoor – are lengthening dramatically. Fortunately the M4, M48 and M5 flow freely, with the Focus’s trip computer still reporting improving fuel consumption numbers alongside a rising average speed. Although the official 57.6mpg would require outstanding throttle discipline, mid to high-40s seems to be realistic.

Shadows are already lengthening dramatically by the time we get to Taunton. The A358 direct to Minehead would probably give us the best chance of a suitable photo at sunset, but the B3224 that heads north-west from Bishop’s Lydeard gets us to Exmoor faster. It’s one of my personal favourites – squeezed between banks and hedges but with minimal traffic and a real flow to it. The natives definitely don’t hang around. We encounter a Dacia Duster being driven with sufficient enthusiasm that a hard-charging Focus can barely stay in contact, let alone consider a pass. 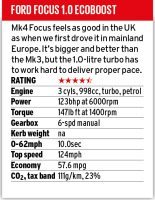 The villages of Wheedon Cross and Exford come and go. Then we turn north at Simonsbath and shed a digit, taking the B3223 towards Lynton and the Bristol Channel. The moors surrounding the road are dark enough to look black, but the sky is filled with a truly spectacular sunset. Niggles aside, the Focus has proved its all-round excellence. We’ve covered 593 miles in 16 hours, including the time required to take a fair number of pictures, fill the tank twice and grab a sandwich. Britain has some outstanding roads, and a humble Focus remains a great way to experience them.

ORBITAL ODYSSEY
The first Focus was a radical departure for Ford, with its wedgy ‘New Edge’ design and emphasis on driving manners a conspicuous contrast to the Mk5 Escort it replaced. It was good enough to win the European Car of the Year gong, an achievement that Autocar decided to celebrate with a suitably ambitious challenge.

The plan was to accumulate mileage as quickly as possible, with a pre-production example sent to lap the M25 motorway 100 times, translating to 12,000 miles. The car stayed moving night and day, with pretty much the entire editorial staff drafted in to drive stints. 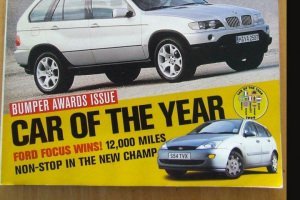 Officially, the only choice was whether to go for a clockwise or counter-clockwise navigation – a straight call on preference for the bridge or tunnel at Dartford – but after a few days, the tedium of repeated shifts meant that some drivers went off-piste. In the case of then features editor Colin Goodwin, considerably so, with a strictly unofficial trip to Devon during which the car was flashed by a speed camera. Thankfully, no paperwork arrived, so Col’s secret was safe – until now.