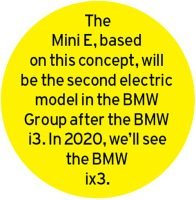 Mini is “the most urban car brand” but also one of the hardest to switch to full electric power due to the size of its vehicles, according to boss Peter Schwarzenbauer.

Highlighting the upcoming Mini E, which will be built in Oxford from 2019, and the alternative version of the vehicle, which will be produced in co-operation with car maker Great Wall in China, Schwarzenbauer, said: “Electrifying Mini is quite a challenge, chiefly because of the small footprint of the cars. It does not leave much room for batteries.

“But if you look at the role of electrification in the urban environment and the desire to be local emissions-free, there is no other brand with the credentials of Mini. It should be a natural fit, and that is the direction we’re moving towards for the future.

“The success of the plug-in hybrid Countryman shows what can be achieved, and the full electric Mini that is coming will show another step.”

Schwarzenbauer also highlighted that the joint venture to build electric Minis in China – the first time Minis have been made outside of Europe – was necessary in order to qualify for the country’s New Energy Vehicles regulations, which require a proportion of the car’s parts to be sourced and manufactured there. The BMW i3 does not qualify.

The BMW Group is known to be working on solid-state batteries in partnership with Toyota, with a sale date mooted to be around 2025. Both smaller and more powerful than today’s batteries, they could potentially pave the way for a range of fully electric Minis.