Perodua Ativa Hybrid used in two studies, on electric vehicles and on mobility as a service

The Perodua Ativa Hybrid has been introduced by Perodua. The electric-petrol SUV is part of two studies by Perodua: a first-of-its-kind electric vehicle study as well as a long-term mobility as a service market study involving 300 subscribers.

This study is in two parts. Part one is to understand group driving behaviour of a hybrid vehicle in populated locations of the country, namely in the Klang Valley, Penang and Johor Bahru.

The other purpose of this study is to understand consumer’s acceptance of a 5-year “subscription” service, which Perodua is offering to corporate clients under its “EZ MOBi” arm.

“The Perodua Ativa Hybrid would be the best vehicle for us to gain unique insights on Malaysian behaviour as a controlled group , as this data will be used to anticipate our customers’ needs when using an electric vehicle,” Perodua President and Chief Executive Officer, Dato’ Sri Zainal Abidin Ahmad said.

The Perodua Ativa Hybrid uses a “series hybrid” system whereby the electric motor sets the vehicles’ wheels in motion while the engine acts as a generator to charge the engine. This model uses a 1.2L engine (WA-VEX) to power the generator.

Based on this technology, the Perodua Ativa Hybrid’s Series System is capable of reaching distances of 31.3 kilometres per litre (based on Malaysian Driving Cycle test)

He said that this pilot programme by Perodua will also allow the compact car company to see the acceptance level of customers on a long-term subscription programme as an alternative to the traditional buying and selling of cars.

“While we believe that vehicle ownership will still be our bread and butter; there is a possibility that a vehicle subscription business model may be acceptable for more users in the near future.

“This is what we mean by ‘subscription’ – a service where all other obligations of owning a vehicle – such as following a service schedule, paying vehicle insurance and paying road tax – will be managed entirely buy us; all the customer has to do is pay a subscription fee to enjoy the package,” Dato’ Sri Zainal said. 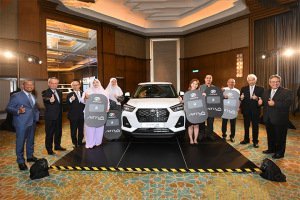