The opening sequence of 6 Underground has Ryan Reynolds in a neon green Alfa Giulia Quadrifoglio tail spinning, tyres screeching, engine screaming through Florence. A neon green Alfa. I was transfixed. No matter how bad this movie might get, I was going to watch it to the end. Assuming that I didn’t pass out before the closing credits. Not from the blood and gore but from the thumping pace. The action moved faster than I could catch my breath.

The premise is a team of international operatives, One, played by Ryan Reynolds, Two (Mélanie Laurent), Three (Manuel Garcia-Rulfo), Four (Ben Hardy), Five (Adria Arjona) and Seven (Corey Hawkins) who set out to take down a dictator. Where’s Six (Dave Franco)? That’s part of the storyline. The catch is that they’re all dead – technically. All their deaths faked, their loved ones left behind. They have no identity, no names (they call each other by their numbers), no more tax returns. They travel by private jet. Did I mention, One was a tech billionaire before he became a ghost with humanitarian scores to settle?

One is cool-headed, a strategic thinker and the bank-roller. He’s also a pilot but he doesn’t have the coolest skills in the team. That goes to Four, the gravity-impervious parkour runner who runs down the external ribs of the Florence Duomo for fun. The rest of his fellow band of the undead dead are a spy, a hitman, a doctor, a driver and a sniper. They are, of course, all super-attractive. 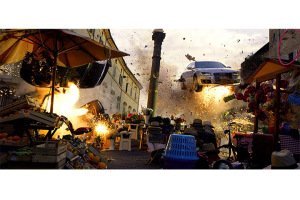 Then there was the cast of cars. It was quite a cavalcade. None were as eye-ball gripping nor heart-grabbing as that neon green Alfa Giulia Quadrifoglio which had been souped up and modified with a hydraulic handbrake to achieve the tight spins and cornering drifts impossible with the stock electronic hand brake. Ah, Hollywood.

No big budget action film is complete without a fleet of pristine, latest generation Range Rovers driven in formation. 6 Underground has two fleets and for easy reference, black for the baddies, white for the good guys.

For the pedantic who need a hole-less plot, there were probably a lot but why look? It was more fun to sit back and enjoy the action. There was a wise-cracking script and a mood enhancing soundtrack. 6 Underground cajoled, shoved, dragged and bludgeoned my senses with such deftness that I might have forgotten to breathe for 128 minutes.

This isn’t an intellectually demanding movie – thank goodness. A serious critic might even have a few unflattering things to point out. For me, it was pure diverting entertainment. Unless you’re some movie snob or seriously anti-Ryan Reynolds, 6 Underground is good viewing for a quiet night in.

6 Underground is on Netflix.

Rolls-Royce has three specially-commissioned Phantoms at this year’s Geneva Motor Show, each one a showcase of Rolls-Royce’s luxury and Bespoke craftsmanship. Rolls-Royce will also introduce the Dawn Aero Cowling, dubbed the world’s sexiest drophead coupé. […]

The new Rolls-Royce Phantom Extended Wheelbase has arrived in Malaysia

The new Rolls-Royce Phantom Extended Wheelbase has made its debut in Malaysia. The eighth generation of the super-luxury limousine is the flagship in the Rolls-Royce lineup and comes complete with enhancements in technology, drivetrain and […]