Unveiled at the 2019 Frankfurt Motor Show, the latest generation Land Rover Defender is a completely different vehicle than the predecessor. Land Rover insists that the newest Defender is not an SUV, but a focused 4×4 vehicle, despite doing away with the traditional body-on-frame chassis design and the usage of front and rear solid axles as well as a manual transmission. Though purists may doubt the new Land Rover Defender’s off-road capabilities, the new one is just as capable as according to Matt Prior, Autocar UK’s Editor-at-large.

Unlike the outgoing model, the Defender is built on Jaguar Land Rover’s (JLR) D7X platform, which is one of the multiple derivatives of the D7 aluminium architecture, – ranging from the Jaguar XE to the flagship Range Rover – the X in D7X means that it is the most extreme version. Attached to the new Defender’s unitary body are front and rear steel subframes. And the Defender comes with four longitudinal engine options attached to an 8-speed automatic transmission which drives all four wheels, including a low ratio transfer case.

The engine range available for the new Defender are:

Moreover, the new Defender is the tallest among in the Land Rover range; it stands 20mm taller and the body-in-white has not related to any other JLR models currently on sale. This means that the new Land Rover Defender is bespoke. The Defender’s suspension layout consists of a double-wishbone in front. And at the rear, the Defender comes with integral link suspension which is common on all D7 platform cars. 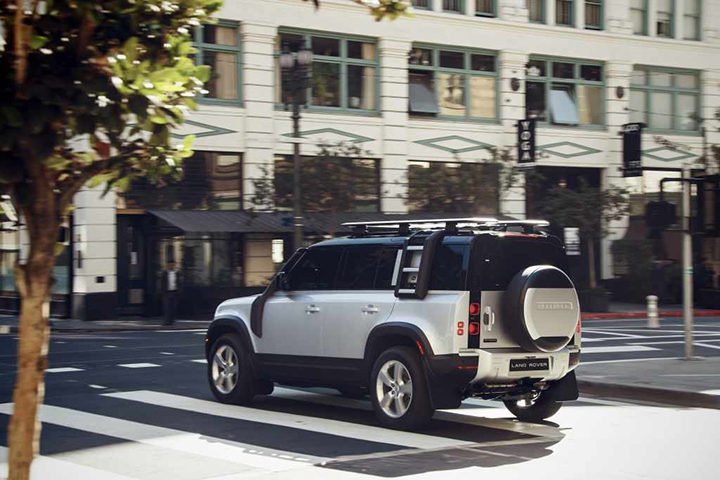 The 2020 Land Rover Defender comes with two body types at launch, a five- and three-door bodies. At the moment, the 110 five-door arrives first, while the three-door 90 will be available later in the year. In terms of dimensions, the new Defender 110 has grown up quite substantially; it is 5.0 metres long, 2.1 metres wide and 1.9 metres tall. The Defender 90 meanwhile is 4.58 metres long.

Just like the rugged exterior design, the interior shares the same ethos as the original. The interior features a mix of premium fabric and leather mixed with hard-wearing materials all around. Moreover, customers can opt for an optional foldable jump seat in the middle for young children, which enables the Defender 90 and 110 variants can accommodate six people.