If the Vellfire isn’t big enough, then Toyota’s upcoming GranAce will take eight in the lap of luxury.

There’s no doubt that many current Toyota Alphard and Vellfire owners get theirs through grey imports. And there are more reasons to go that route because now there’s a bigger alternative. Enter the Toyota GranAce. Measuring at 5,300 mm in length, 1,970 mm in width and 1,990 mm in height, The GranAce fills the gap in the market for people with big families or larger-than-life personalities. 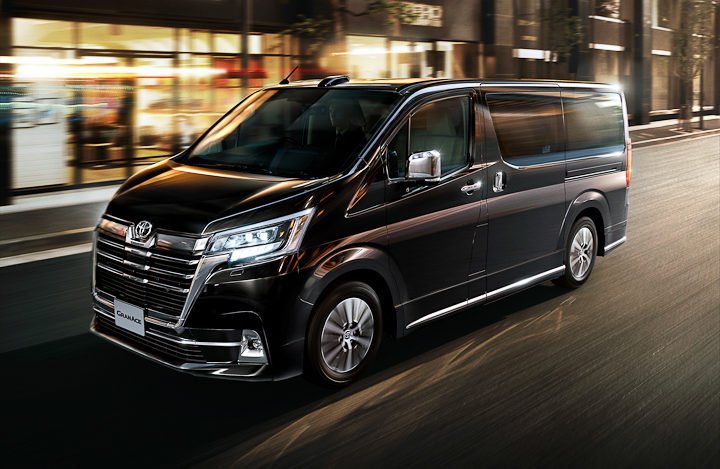 If the GranAce name hasn’t given much of a hint, Toyota’s luxury people carrier is based on the HiAce commercial van. And although the whole Luxo-van concept is not new, the GranAce takes things a step – or two – further.

Besides the large chrome radiator grille, the GranAce comes with twin-lens LED headlamps which flow into a decorative chrome frame. But it doesn’t end there. The generous use of chrome on the large wing mirrors, side sills and the rear door would make Immortan Joe proud. LED diodes are also to be found in the rear lamp clusters.

The interior space is what the GranAce is all about. There are two seating setups available; the Premium Grade’s three-row, six-seater, and the G Grade’s four-row, eight-seater. I would wager to say that many will opt for the former because there will be much more room for four to stretch and the second- and third-row seats are heated full-sized power-adjustable executive seats which are “designed for complete relaxation.” The four-row, eight-seater version, however, would likely be suited for corporate fleets; there are two executive seats at the second row, two captain seats at the third, and regular split seats at the fourth. In some way, the pecking order has been established here.

At the front, Toyota has updated the driving space of the GranAce with more chrome, leather-wrapped instrument binnacle hood and wood-grain trims, while still retaining the HiAce utilitarianism. Also, the rearview mirror has a screen embedded inside. The interior also features LED mood lighting with only three hues to choose from: amber, clear blue, and white. Light intensity and hues can be adjusted from the rear seats.

Being quite a large vehicle, the automatic sliding door opens a metre wide (1000mm) for ease of entry and exit.

Motive power comes from a 2.8-litre turbodiesel engine and a six-speed automatic transmission which drives the rear wheels. The four-pot diesel engine makes 175 bhp at 3,400 rpm and 450 Nm 1,600 – 2,400 rpm. In the effort of cleaning up the waste gasses, the GranAce comes with DPR (Exhaust Gas Purifier) and urea SCR injection device.

Suspending the GranAce above ground are MacPherson strut-type independent suspension and a trailing-link rigid-axle suspension at the rear. And boasting a tight 5.6-metre turning radius would make it an easy people carrier to drive in cities.

In terms of refinement, Toyota says that the body construction of the GranAce has been strengthened for stiffness by preserving the torsional rigidity of the floor surface, while each pillar has been joined to form a ring-shaped frame.

Keeping the occupants isolated from the elements and the clattering diesel engine noises are optimally arranged sound-absorbing and insulating materials. A high-density sound-insulating layer covers the firewall and laminated sliding glass door keeping wind and other external noises at bay.

To be delivered to customers in March 2020 to Europe, and expand sales to North America in August, and to Japan/Asia in October. The saying “Race on Sunday, sell on Monday” still applies much in […]

With improved build quality and refinement, the up-sized Subaru Forester takes on Malaysian roads like a champ. The 2019 Subaru Forester’s Malaysian debut has been a long-awaited one. Six months after its global debut at […]